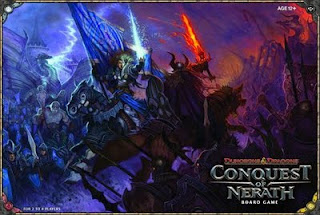 A few weeks ago I was pointed out to the map for Wizards' upcoming boardgame, Conquest of Nerath. Set in the new "D&D Core World", this game contains some board spaces named after classic Greyhawk modules, such as the Tomb of Horrors, White Plume Mountain and Vault of the Drow. I didn't pay much heed to it at first, since these modules have been rehashed to the point where they are now generic enough to work in any world, not just the World of Greyhawk. So this game got no rise out of me, but weeks later, I stumbled upon this editorial by Bill Slavicsek in the recent eDragon #399 (wow one away from 400, sigh!) that talked about Conquest of Nerath and it got the gears in my head turning. For good or ill, this could very well be a sneak peek at the future of Greyhawk (and the past in a twisted way).
Conquest of Nerath is part of Wizards "Adventure System" boardgame line that includes Castle Ravenloft, Wrath of Ashardalon and the soon to come Legend of Drizzt. Nerath is essentially a world war strategy game akin to Risk or Axis & Allies:

"Muster armies of footsoldiers, siege engines, monsters, and dragons to attack your enemies. Fight across the waves with fleets of warships and raging elementals. Plunder ancient dungeons with bands of mighty heroes, searching for magical artifacts and awesome treasures that might tip the scales of battle in your favor. The fate of empires is in your hands!"

I like a good wargame, no big deal there. Here's a big deal to Slaviscek as he writes in his article:

"In addition to the traditional trappings of a strategic war game, Conquest of Nerath includes a new element that makes it a uniquely D&D experience. As you can see from the above illustration, the board contains dungeon spaces scattered across the world. These add an exciting option that changes every time you play. As you build armies and send them out to crush your opponents, the dungeons make possible another kind of strategy. You can recruit heroes and send them into the dungeons to find treasure and magic items to help you win the game—provided you can defeat the monsters waiting there."

Sounds decent right? Well sorry Bill, the system may be new, but this element was done before in another world war strategy boardgame called....Greyhawk Wars! That's the blast from the past, now back to the present:

"...in addition to our ongoing efforts to provide the best RPG products we can, D&D R&D is hard at work looking for new, fun experiences to engage fans everywhere. Conquest of Nerath and the Adventure System games are just the beginning. We’re experimenting with games for younger fans, Euro-style board games, and other fun ideas that take the D&D brand to places it’s never been before."

FYI, Euro-style boardgames (or Eurogames) such as The Settlers of Catan are very popular and Wizards apparently wants to emulate that. For example at Gencon 2010, Catan had booth space in the exhibition hall that rivalled or probably exceeded that of Wizards. This my friends, may be Greyhawk's direction in the coming years. Since 4th edition's launch, fans have speculated endlessly on when Greyhawk might get its turn at a new setting update and how it might be undertaken (such as Forgotten Realm's world-shattering changes). All the while, Wizards has slowly been ramping up its collectable card game and boardgame lines, which puts the brand more in line with what parent company, Hasbro is familiar with. Ravenloft has already been passed over for an RPG setting book in favor of the boardgame treatment, and now R.A. Salvatore's Drizzt is going to give the Realms a big boardgame presence in October. In my opinion, a rich setting such as Greyhawk can easily derive enough content to spawn a complex boardgame akin to Settlers of Catan (plus expansions) and Wizards R&D knows it.

The added benefit for Wizards going this route is people don't grumble about boardgames like they do RPG settings (unless those boardgames affect the RPG like Greyhawk Wars did). So by turning Greyhawk into a self-contained complex boardgame like Castle Ravenloft, you draw in board game enthusiasts (many of which may know little GH at all), and you'll snare the long time Greyhawk community from all the varied edition crowds, because to put it bluntly, we are suckers for new Greyhawk stuff.

Does this mean the Greyhawk setting may never see any RPG update if it goes the boardgame route? Not necessarily. The core world of D&D seen in Conquest of Nerath is the same place they'll continue to use for 4th edition splat books, articles and future D&D Encounters events. A self-contained Greyhawk boardgame could very well run along with an RPG treatment the same way Greyhawk Wars was meant to complement From the Ashes back in 2nd edition. Anything could happen at that point. Mind you, this isn't how I hope things turn out, it's just my newest prediction before Wizards announces their 2012 products in August.
Posted by Mike Bridges at 2:31 AM

You are spot on.

I'm all for a Greyhawk inspired boardgame, and the 'dungeon segment' addition is cool.

I do wish Wizards would stop chasing market segments and start leading one, though.

No 'Edition War' commentary intended, but I think 4E was designed to put WotC into the tabletop/skirmish market (I guess they were worried about Warhammer eating the world or something). This new boardgame 'vector' is sure to keep Hasbro off their back in the board meetings, and board games are reasonably recession-proof.

I love what you express in the final paragraph - a boardgame Greyhawk 'push' with some RPG material wouldn't be a bad thing. If they're smart, they'll angle the RPG material as supplementary and granular enough to be added into existing homebrew campaigns (just wishing...) My own experience is that there are plenty of fans of 'Greyhawk' adventures, but late TSR/WotC Greyhawk canon makes the Greyhawk setting too heavy with massive overdoses of 'canon' that get in the way.

I hate to quibble over niggling details, but Conquest of Nerath is totally different from the D&D Adventure System games. Ravenloft, Ashardalon and Legend of Drizzt are dungeon crawl/survival games and are meant to be able to mix together, where Conquest is a Risk-style war board game. I only bring this up because if people go buy Conquest, thinking its part of the Adventure System, they will be disappointed.

To be perfectly honest, I've been playing with the idea of pitching a series of Greyhawk board games to WotC, so this is something I'd be able to get behind, if it were done properly. I think Greyhawk could lend itself very well to that sort of game.

Also, to be fair, SPI did the "send heroes into dungeons to get magic items to boost your armies" idea back with their "Swords & Sorcery" wargame.

This new board game sounds promising, though I must reserve final judgement until I've had a chance to experience it.

Sully: Thank you for the clarification. I did know that having read the article, but the detail you brought up got lost in my rambling.

Joseph: Also a nice clarification! You're always cooking something up Joe, I like that.

SirXaris: I played GHW alot as well and never took it as canon influencing like it was perceived. Ah well. I want to see how Wizards copies the Eurogame style though. So much for being the innovators of gaming.

What's old is new again. This isn't just reminiscent of the Greyhawk Wars board game, or the sideways movement of 4E towards the long-successful Warhammer model of gaming...

This is a return (rehash? devolution?) of the original type of game that gave BIRTH to D&D. The game, and the game world (Greyhawk) began when a group of table-top wargamers (EGG and company) from the early 70's decided to throw in some dungeons below their miniatures wargaming table. This direction is neither new, nor forward, and I laugh at the PR that plays this as innovative and original design genius.

Having said that... if going back to D&D's birthplace revives interest in tabletop RPGs and old, beloved campaign worlds, I say more power to them!

Maldin: Thanks for the comment! I think many older gamers often forget the game's roots. I know I do. To many younger players though, everything WotC does is innovative, so it falls on us to teach them! If GH never gets another RPG treatment I would not shun another avenue like boardgames, but lately here they act as if GH does not exist. All I want for GH is to stay relevant for all generations.

A very interesting prediction. I've never been that big on euro boardgames (and my partner detests all boardgames - which sort of means I never get to play), but I agree that at least this approach would prevent them from crashing a moon into the oerth.
Still, I would prefer a real setting book to a boardgame. But with all those great greyhawk sites on the map of Nerath the draw of greyhawk as a place to experience classic adventures is dwindling.

Hah!
Nice call on the Greyhawk Wars game doing it first.
I would also note that, functionally, the Birthright Setting did it second, having "Adventure" as a Domain Action. I'm not sure how Bill Slavicsek could forget that, but . . .

As for WotC wanting to copy the Eurogames, haven't they learned they are no good at petting another man's Rhubarb yet?
Oh well, their doom.

I don't know WotC probally should have outsourced the Board Game wing to Fantasy Flight like Games-Workshop/Black Industries did a few years ago.

Victor: Board games have their time and place. I wonder how the Ravenloft fan community has taken to the Castle RL boardgame?

Samwise: I don't normally bag on Slaviscek mind you. I guess since they lost Star Wars he needs to stay busy. Otherwise, yeah the Wizardification of say, Settlers of Catan is gonna be cringe-worthy. Let's hope they test it out on some other game world first, like Birthright!

Richie: Hm, that is a good point. Does Wizards ever outsource?

Well, there's the thing, it would work fairly well with Birthright, which was set up as a domain building game-setting.
And, as it happens, they did outsource the Birthright computer game years ago. Mind you, it suffered from having a system that was ridiculously easy to crack, but it was a pretty direct conversion, and I expect it would work fairly neatly as one of those Eurogames if you don't mind chilling in the throne room instead of the dungeon.

Mortellan: You are absolutely spot on with this one. I agree entirely with you and Maldin that 4e is just going back to it's roots. It's not "3e dumbed down", it's "1st ed. on steroids"! And so, as WH40K has shown, this is really a viable gaming direction nowadays, and yay for that.

And so, I too, loved the Greyhawk Wars game ... SirXaris, I still have a near-mint copy of it on my gaming shelf. You need to find your way to Texas, and you've got a full-time GHWars partner. :D