Well met Greyfriends, here's a couple classic comics of mine from 2007 concerning the hero-deity of swords, Kelanen. A hell of a lot of research went into these. Good lore. Enjoy!

June 7th, 2007:
This week we check in on the ever-popular Prince of Swords, Kelanen. To put it bluntly, Kelanen is obsessed with swords. As the legend goes he wrested the sword Fragarach 'the Answerer' from the hands of an alien god. Fragarach of course is yet another one of those Gygaxian imports from Earth myth. That means the alien god in question can surely be none other than Manannan Mac Lir of the Celtic Mythos (Greater God of the Sea). That must've been one hell of a fight.

Not yet satisfied, Kelanen crafted six other 'Swords of Answering' according to the classic adventure The Temple of  Elemental Evil. Made in the theme of Fragarach, their names are Rebutter, Scather, Replier, Retorter, Squelcher and my favorite, Back-Talker. And because Kelanen's symbol is nine crossed swords, apparently three others were tacked later, named Concluder, Last-Quip and the shamelessly redundant Answerer.

Naturally instead of keeping them for himself in his super-secret extra-dimensional stronghold Kelanen somehow allowed all the blades to be scattered abroad for heroes to find. Indeed, Fragarach fell into the hands of Prince Thrommel of Furyondy who then also became lost himself. Go figure. Who put Kelanen up to all this sword mania? Easy answer, his two original swords Sureguard and Swiftdoom. The 83 Greyhawk Guide says Kelanen has no friends or confidants other than his swords. Yes, two highly intelligent, highly egotistical swords that match his neutral alignment and share a purpose to defend him and his interests without hesitation. Two voices in your head, only giving you advice that you want to hear...tell me that's not a recipe for insanity.

June 14th, 2007:
This week is compliments of manic World of Greyhawk Comic conspirator Cebrion. Here we see the second half of Kelanen's popular legend concerning Fragarach. As tales go, to promote Balance he made replicas of the sword he acquired from the 'alien god'. These lesser 'Answering swords' all have their own names and alignments as well. Sadly, Wizards of the Coast's "Book of Nine Swords" has nothing to do with Fragarach or Kelanen. What a missed opportunity!

Anyhow, as a servant of the Balance and Saint of Swords, Kelanen must surely patronize Boccob, a deity with his own balancing habit, namely that he has a copy of every magic item ever made at his abode. These two compulsions are about to create trouble. Check it out... 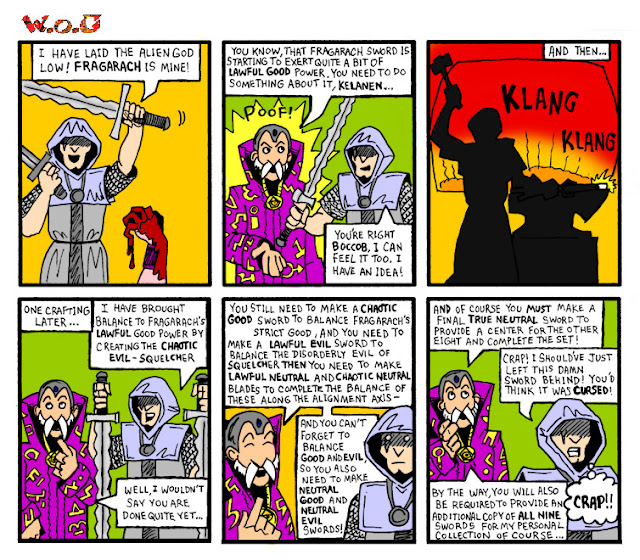 I'm a big fan of Kelanen, and I remember at least that 1st comic you reposted very well. In a prior campaign, 1 of the few metaplots involved recovering the 9 swords of answering to help w/ the reincarnation of Kelanen, who was killed off for various plot reasons. My current campaign started w/ him (and others of course) as a 1st level PC. I made him a Warblade from...the Book of 9 Swords of course ;-)

This campaign is now winding down, but I've had a blast w/ him as a PC.

That's super cool! I used Kelanen for the first time in my last Sea Princes game where the players were trying to recover the 5 Swords of Corusk. Kelanen made a cameo as a pirate captain who sets them on the course for one of the blades. Good times.

. In a prior campaign, 1 of the few metaplots involved recovering the 9 swords of answering to help w/ the reincarnation of Kelanen,