Adventuring in the City of Greyhawk 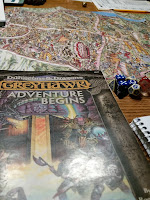 Greetings Greyhawk fans! It's a slow week so I'm here to tell you a bit about my home campaign. We recently wrapped up playing the first two modules in Tales From the (Green Dragon) Yawning Portal, and have now returned to the City of Greyhawk to indulge in some old school down time activities and urban intrigue. I am using the City of Greyhawk boxed set, Greyhawk the Adventure Begins and the updated city map by Denis Tetreault which you can find here.
So far our two dwarven cousins Marya Hammerfist and Korgan Crag have made connections in the Greyhawk dwarven community (including tax collector Glodreddi Bakanin's crew) and got a job defending the Silver Garter from preachy Pholtus priests. Tiefling fighter Bravos has reconnected with his mother in the Artisan Quarter (a first for me) and confronted the Pholtans on their own turf. Halfling rogue Minchy and tiefling warlock Everleigh Strongbow have made their presence known at the Thieves' Guild Hall and Everleigh is using Bravos' mother as day care for her adopted goblin baby. All this before, the group is invited by a con artist to a neighborhood called Odd Alley in the Old City for an important counter-offer away from the Silver Garter. Odd Alley is well, weird. Time runs differently there and the shops are more exotic than elsewhere in the city. Based on a location in one of Gygax's novels, I may do a write-up on this area someday. At the end of the alley in an abandoned building they fought a "door" mimic. So far so good, eh?

It's been a long time since I've ran Greyhawk urban sessions (recent years focused on the Sea Princes). I used to do this sort of stuff almost exclusively. Urban adventures are a slow build up, as hooks and subplots are created almost randomly through roleplay and actions taken by my players. It's how sandbox games should done, and the city is the only place I've felt comfortable running one. I'm not sure how long I'll be running them around the streets of Greyhawk, but when I'm ready I am eyeing White Plume Mountain as their next big venture. Wish them luck! 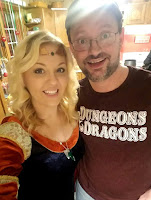 One last, very important news tidbit. Do you like video games? Have you ever tried watching live-streams of video games? Okay, well there is no one I know more fun to watch than my good friend, the multi-talented, awkwardly regal, xb0shi3x. I mean, who else regularly cosplays for her D&D sessions? Check out her stream on Twitch twice a week, and subscribe, you'll be glad you did!

Need to get in them sewers.

Another good resource for city adventuring in Greyhawk: the Walled City Outdoor Geomorphs. Lots of ideas and options there: http://www.greyhawkonline.com/grodog/gh_geomorphs.html#city.

Oh, and if you're planning to move into WPM eventually, you may want to look into Erik Mona's "Absolute Power" LG adventures: the first one, "River of Blood" is set in Greyhawk and ties back to Sir Bluto Sans Pite.

Oh man Allan I didn't know about either of those things. Thanks!