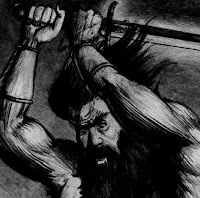 Hail friends of Greyhawk! Today I'm musing about all the children of Kord god of strength. In fact, I'm entirely surprised there isn't any officially named in canon. At least to my knowledge. Why is this a shock? Well Len Lakofka set them up to be some heroic progeny way back in Dragon Magazine #87. Perhaps it's a tease, but even your next character could be the Child of Kord. How? Let's have a look at some 1st Edition lore...

Kord is worshipped more than any other Suel deity. Thriving churches dedicated to him can be found in the Barbarian States, northern Ulek, Almor, the Great Kingdom, Hepmonaland, and on Lendore Isle. Small isolated churches may be found among peasants over the entire route of the Suloise migration"

Kord is all over, especially within the Thillonrian Peninsula. So basically any character, especially barbarians, could have a chance to be a demigod child.

"Kord is quite the fool for a pretty face. He favors elven and human women, but has also consorted with other humanoids and even giants. The world is full of his sons and daughters, but few, if any, of them can claim demigod status (less than 1%). Any figures who can make that claim must have scores of 18 to 20 in two of these three ability areas: strength, constitution, and dexterity."


So, Kord is not only loved Oerik-wide but, like many AD&D gods of Greyhawk, he flaunts the fact that true deities aren't supposed to directly enter the Prime Material Plane without the consensus of the pantheons. Clearly then, carousing with mortals in alternate forms is the classic mythology loophole.

"To determine whether an offspring of Kord is entitled to demigod status, roll 2d6+6 for each of the character’s ability scores. Two of the results must be 18 (rolls of 12, modified), and the numbers must be assigned so that the character has scores of 18 in two of the three physical abilities: strength, constitution, and dexterity."

Now the chances an elf having a modified 18 DEX is pretty good, but the other stats means Kord more than likely has children among giants or ogres before medium sized humanoid-kind. Even so, the rules of this edition allow you to try and build your character as a child of Kord upfront (unlike the scant 1% chance of being psionic after the fact). The 2d6+6 system guarantees a decent PC with minimum stats of 8, average of 13 yet there is no certainty you'll get two 18+ stats. The d4 roll is what separates the demigods from the pretenders though...

Only those characters who pass all these tests and end up with two scores of 19 or higher among strength, constitution, and dexterity can dare to claim their birthright and openly profess Kord as their father. Kord will not deny such a claim; instead, on the child’s 17th birthday Kord will come forth to give the young warrior a great task based almost entirely on fighting ability. Those who pass this test will acquire limited special powers (see the lists below)."

How's that for a 17th birthday party? What's even better for the PC child of Kord is ALL starting ages in 1E (even humans) are already in that range, meaning a player who defies the odds could not only have two exceptional stats, but also some additional powers (assuming the PC can pass this test of combat) at only 1st level!

"Although passing this final test does qualify the character (in Kord’s eyes) to call himself or herself a demigod, the overriding power of Lendor keeps Kord’s offspring from dominating the Prime Material plane"

"Each demigod character gains from 2-4 special powers; roll d8 once for each of the following lists."

List #2:
1. Heal self once/week
2. Jump or levitate at will
3. Enlarge self at will, as 10th level M-U
4. Climb walls as 7th level thief
5. No non-proficiency penalties applied
6. Can cast silence on self at will
7. Blood rage: Will go berserk (+2 to strength) if damaged 50% or more in combat, fighting until slain or until everything within 60 feet is killed
8. Roll twice, ignoring 8s and duplicates

Now all these "powers" are quite tailored to the AD&D system, so for an enterprising DM to adopt the Children of Kord into their modern D&D games, it will require a bit of creative game design.

So, you've successfully made a child of Kord...Now for the last paragraph of info on these rare quasi-deities.

"Kord’s children may never be lawful, nor may they be paladins, illusionists, monks, or druids. Any of his children who do not enter his clergy and who reject the fighting profession (by not becoming a fighter or ranger) and any of his offspring who display cowardice will be disowned, which might mean (30% chance) that Kord himself will come to the Prime Material plane to slay the offending character."

No one said being a Child of Kord was going to be easy. For those who hung in there for this long article, here's a bonus Kord comic of mine from Oerth Journal #21. 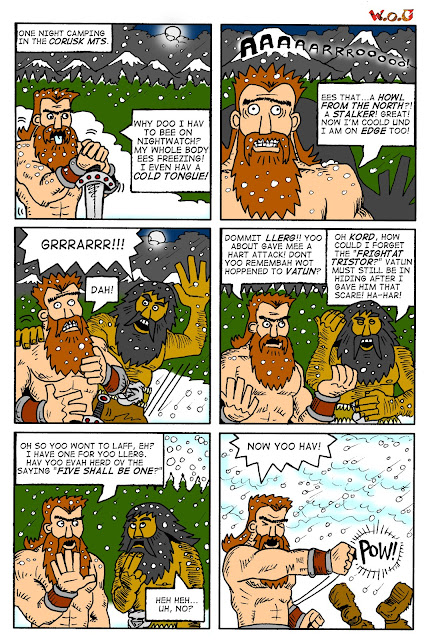 Great piece, Mike. I agree---a child of Kord could make an excellent NPC warlord or other villain. But it owuldn't have to just be a barbarian---could be a brave thief, or fighter/MU, for example, too.

Yes, they are fun, though they lean hard to a high powered, or power gamer style which probably is off putting to some.

I DMed a few back in the day, though. One even had the "demi god" potential.

Oh, BTW, Len's Suel pantheon is the best one in greyhawk. I like several other deities of the setting, but Len made a nice pantheon, one that could be the basis of campaigns all by themselves.

and a final point: human fighter starting age is 15+d4

moreover, I never thought to say a roll of an older character meant success...if anything, I'd assume it meant automatic failure, but I instead would allow the super unlikely potential demi god to start at age 16 (so as to prepare for the challenge by gaining xp for a year), or age 17 (& just start off doing the challenge at L1/xp 0). Auto success or failure never even crossed my mind back then (or now, until seeing your post).

Genghis Don: You sir are amazing. I am not sure I've ever heard of any one using these rules before. I certainly never got around to it (and my players will hate me for it).