Sean Reynolds on The Scarlet Brotherhood 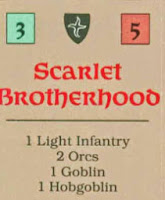 Hail Greyhawkers! In my endless search for all Greyhawk knowledge I tend to come across ancient threads and posts that need resurrected time to time. Today's post is one of these. Prolific D&D/Paizo writer, Sean K. Reynolds is the author of among many things, The Scarlet Brotherhood. This book covered the Tilvanot Peninsula, Amedio and Hepmonaland regions. In February 2009, Mr. Reynolds reposted on his Wordpress blog, a neat retrospective on making tSB and how he came up with many of the NPC names contained in the sourcebook. It's worth another read, so I'll post it here in it's entirety for your reading pleasure. Thanks Sean for your hard work on Greyhawk (and its gods) over the years. Enjoy!


(Trivia & Anecdotes is a series of blog posts I’ve been meaning to make for years now about weird and sometimes funny behind-the-scenes facts about various books I worked on. Yes, the acronym is deliberate.)
(Published mid-1999.)
This book, hmm. There aren’t really any funny stories about it. I remember that in my process of writing it, I had to wrap my idea around the Suel people–a race of what essentially are fantasy-world Nazis: fair skin and hair, racist against all other humans, believing they’re the master race, that as a race they were wronged and that they would rise again to take their rightful place in charge of the world. They do evil experiments on other creatures. They murder and enslave others. They’re pretty much evil bastards all around. And I had to make up 96 pages about them.
Which proved difficult. Fortunately, Lisa Stevens (creative director for Greyhawk, not coincidentally my uberboss at Paizo) was willing to let me explore stuff near the lands controlled by the Scarlet Brotherhood–stuff that had only been hinted at in old old old products (namely, The Hidden Shrine of Tamoachan, which has murals depicting black-skinned humans battling the Aztec-ish humans that built Tamoachan). So the question for the latter part of the book was “who are these black-skinned humans, and what do the Scarlet Brotherhood, living so near them, think of them?” Thus, we got a jungle continent with a thriving black-skinned-human civilization in the south, with black/brown/white mixed villages in the north that had become savages–an ironic twist on the white-supremacist idea that their race was the superior civilization. (I also did it because the Suel have a barbarian-ish god of battle and I needed a way to explain how he was still important to some of the Suel people).
A few notes and inside jokes:
* The southern continent had long been known as “Hepmonaland.” I decided it got that name because of the famous Suel explorer Eri Hep-Mona… named for Erik Mona, Greyhawk guru, loremaster for Team Greyhawk, and now the publisher at Paizo. ;)
* The illo for the Father of Faith, Tyrum, is based on former Wizards ad guy, Mark Jessup.
* The illo for Mother Iridni is based on former Wizards PR person, Lara Dalch.
* Father Renho’s background is based on Duane Maxwell, former editor at Wizards (and former military intelligence guy)
* Foster Uncle Pramas is based on Chris Pramas of Green Ronin, who at the time was another designer on Lisa’s team.
* Doxon, who has several refs in the book, is named for a car dealership in the greater Seattle area. He also makes an appearance in my later book Into the Dragon’s Lair.
* Kerilin on page 24 is name for my sister, Keri.
* Uncle Ikkens in Shulof is named after former Wizards editor Jon Pickens.
* Fort Calmuden is named for my friend Jeff’s dwarf Calmuden Rhizodex.
* Fort Tiru is named for my old Tunnels & Trolls character Tirumulesa, who is named after my high school friend Virinchi’s dad, Tirumulesa.
* The Maxwul is based on and looks like Duane Maxwell.
* Ellinka is probably named for Mike Selinker, game designer, with whom I shared a double cube at Wizards.
* The creation story of the Touv is probably the first creation story to appear in a Greyhawk product.
* The goddess Berna is named for my college friend Bernadette. Likewise, Nola is named for my college friend Nola.
* Hambu Channel is named for an old AOL screen name of mine, “Hambu,” short for “Hamburger.”
* Nila, the great dog of Hepmonaland, is named for my white lab Nilla, who died a few months before I wrote this book.
* The adventure hook “Death on Black Wings” is named for the chapter of that name in the original Dragonlance trilogy.
* Writing the Gods chapter of this book is probably what cemented my role as “the guy who does gods writeups for D&D.”
* Likewise, the Suel Language section probably made me the go-to nerd for various fantasy language articles I did for Dragon.
* The spell devious stares is named from a line in the Marcy Playground song “Sex and Candy.”
* All the interior art is by Sam Wood, coming into his own as an artist for Wizards, and I think soon after he started working on D&D core stuff for 3rd edition.