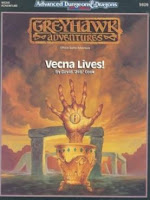 Greetings Greyhawk enthusiasts! I'm here to share an article I saw on my Twitter feed today. Looks like more details of this Dungeons & Dragons movie is developing. The surprising part is the movie is rumored to include the Eye of Vecna! The not so surprising part is the rest of the movie seems much more tied to the Forgotten Realms. Now, don't get me wrong, this is a win-win concerning D&D movies; use your #1 setting and also use one of your most iconic artifacts to set up an inevitable confrontation with the arch-lich himself. I'll be optimistic and wager anything involving Vecna will be a trilogy.

The pessimist in me however, thinks this smart movie making decision will come at the cost of future Greyhawk development which I was just talking about a few weeks ago. The whole Vecna theme is one of Greyhawk's last great story lines left to revisit. Of course, Vecna and his various magical body parts were never totally just a Greyhawk thing, that is until the module Vecna Lives! brought him to Oerth and wove him into its rich history (the article acknowledges this gratefully). Traditionally in D&D lore the Eye (and Hand) of Vecna is a multiverse-level threat, even to the unsuspecting Forgotten Realms. So while I'm super jazzed to hear about the Eye as the objective of this movie, it's sort of my problem with this storyline as well.

You see, as a long-time D&D player, I'm disappointed to see the Forgotten Realms with all its hundreds of novels and sourcebooks, doesn't have anything unique worth making a movie about? Heck, it could only fill one slot in an anthology of classic D&D adventures published with the Yawning Portal on the cover. Now the article mentions an obscure Realms dragon and knights who follow some FR deities, which is great, but unless I see stuff like Waterdeep, Zhentarim or the Harpers in this flick, I'm worried it's going to just be a generic D&D movie like the rest of them. But hey at least the Eye of Vecna is here to save the story. I hope in the movie's opening exposition they can at least allude to Vecna and the origin of his Eye/Hand coming from "another plane".

End of rant! This post will likely require a lot of revision and retraction as the movie isn't due till mid-2021 after all...
Posted by Mike Bridges at 7:29 PM

I hadn't heard about this, thanks Mike!

Forgotten Realms doesn't have anything as iconic as the eye and hand of Vecna, so they have to borrow from a superior setting.

casl: If it's FR though, I wish they would use the IP they already have. You can't tell me RA Salvatore or Ed Greenwood's stuff wouldn't be as good as random D&D script by XYZ.

They are going to do whatever they want to right? It is beyond that worry point for me, and is just the reality of today with corporate D&D.