Welcome back readers of Greyhawk nostalgia. I don't have much new to present so let's muse on some old Greyhawk goodness. Yes, let's look at the hype surrounding the World of Greyhawk setting's earliest ads in the pages of my all-time favorite gaming magazine The Dragon. 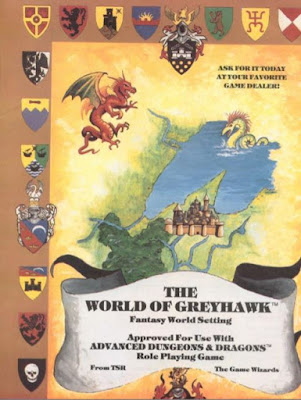 First up is the ad for the 1980 World of Greyhawk "folio" in the pages of Dragon #39. This is the one that started us off. It's basically the cover of the folio without the TSR logo and strategic ad text thrown in. Just a taste of that map, the shields, drawings of monsters and a castle. Yes, that would've sent me to my local game store!

Personally though, I began my love of Greyhawk a few years later with the Greyhawk boxed set and only got my hands on the Folio many years later. In the issue before this ad, if I recall correctly, Gygax had an article that previewed all the Greyhawk products and projects they had in the works. 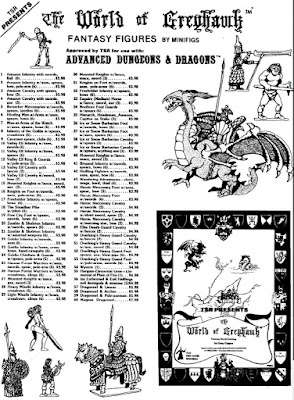 This advert is from Dragon #41. The World of Greyhawk Fantasy Figures was one of these projects that Gary teased in store for the Greyhawk setting. He includes a pic of the Folio in the corner as a tie-in. Back then, mini photography wasn't all that so the ads tended to be illustrations of the minis. I literally did not know about this mini line until well after it was cancelled and to this day I have never tried to collect them. I do know that Joe Bloch is an aficionado of this line and has written about them extensively. Shoot over to Greyhawk Grognard and check out these minis. They are primitive by today's standards yes, but they are very grounded in the lore that Greyhawk supplied back in the 80's.

Gygax the wargamer was definitely setting Greyhawk up to be a wargame. Somewhere along the way dungeons became more popular and the wargame aspect was left for later attempts such as Greyhawk Wars or Battlesystem. Either way, if you ran your Greyhawk campaign with these minis then I award you 1,000,000 Greyhawk cool points!


That's all for now. I couldn't find an ad for the 1983 Boxed Set in Dragon Magazine. I know that from 1983-1984 was a steady stream of Greyhawk deity articles so I know the world was popular as ever, maybe they didn't need to advertise such an in-demand product? If anyone can reference a magazine print ad for the boxed set let me know! More nostalgia another day!
Posted by Mike Bridges at 2:56 PM

This was my go to campaign setting for everything I ever ran. The color maps were amazing and just full of potential. I want it given the 5e treatment it truly deserves.