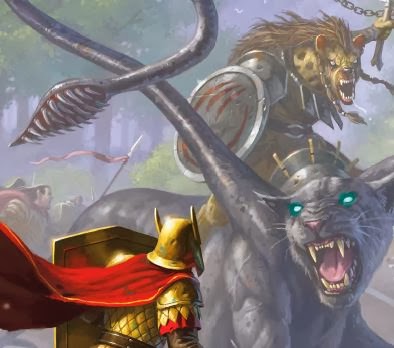 Well folks, the end is here for Dungeon (and Dragon) Magazines in the 4th Edition digital era. When they return and in what form is anybody's guess. Dungeon #221 went out on a high note though, and the World of Greyhawk got some mighty good love in this issue! As always, you'll need a D&DI subscription to see this issue. Until then here is what you're missing out on:

Lowdown in Highport by Thomas M. Reid is set in the lawless Pomarj during the heyday of the Slavelords. This AD&D adventure for levels 3-5 is a follow up to the prequel module A0: Danger at Darkshelf Quarry that you can only find in the recent Against the Slave Lords reprint. Regardless, Lowdown in Highport still works as a stand-alone mission. In this adventure, a cleric of Trithereon named Mikaro Valasteen hires the PCs:

"Ever more desperate to find a new means of escape from Highport, Mikaro has started work on a plan that is both daring and dangerous. He intends to use a series of old sewers coupled with natural caverns running beneath the town as an escape route to the sea beyond the walls. But he needs someone to clear out the creatures and pitfalls he knows lie within."

This adventure has good old school encounters, dungeon crawling maps and even random charts. As always the events and backstory fit well into the greater Greyhawk/Slave Lords story arc. Greyhawk collectors, you won't be disappointed by this charming little mod.

Lastly is a very ambitious adventure that I've been quite eager to see. The Battle of Emridy Meadows is by Christopher Perkins and Jon Leitheusser. The adventure for 5-7 level is made using D&DNext rules, so you'll need playtest material or the published Ghosts of Dragonspear Castle to aid in running this properly. As the title says, it's set during the defining battle of the Greyhawk setting:

“The Battle of Emridy Meadows” is a collection of missions, all of which take place in and around Emridy Meadows (also referred to as the Meadows) before and during the eponymous battle. The Meadows are located south of the Velverdyva River, along the edge of the Gnarley Forest where it meets the Kron Hills, not far from the villages of Hommlet and Nulb. Although the battle takes its name from the Meadows, it is a moving conflict that spills out into other nearby areas. The missions included here take place at different times and in different places over several days, with little time between."

The PCs aren't directly involved in the battle itself, but instead play an important part in aiding the outcome:

"Rather than fight on the front lines alongside the humans, dwarves, gnomes, and (eventually) elves of the Righteous Host, the characters undertake three critical missions to help Prince Thrommel and his forces gain the advantage. How the characters acquit themselves during these missions directly affects the outcome when the two armies meet."


The module also includes well written historical details on the area and info on a few important NPCs from Greyhawk lore such as Prince Thrommel, Viscount Wilfrick and Serten that figure greatly in this story. There is also a map for the village of Nulb and a few other set locations for the missions abroad. Played out, The Battle of Emridy Meadows could possibly have a different result than what is written in Flanaess history. This masterfully crafted module is the perfect gateway for a new era of D&D that I hope will someday prominently showcase more Greyhawk. Download it if you can!

Well that sucks. Hardly seems worth it to subscribe to DDI now, with the magazines going away until the 5E launch.

I imagine it'll all still be there in archive when it starts back up.

Jon gave me a little info about the adventure when I asked on FB: "It takes place in the past of Greyhawk at the historical Battle of Emridy Meadows. The characters are brought in to take on some missions for Prince Thrommel and his war council -- along with Serten. They are given a number of missions to aid in the effort and those missions actually have an effect on the the outcome of the battle. There are three main missions, some side missions, and even some optional missions the DM can add if desired. It should be a lot of fun for players who are into Greyhawk and/or people who want to try D&D Next (it uses the Next rules). Perkins ran a number of playtest sessions and he said people had a great time."

It sounds pretty substantial. Someday I'll pick up a one-month subscription to DDI and then mine it for all of its Greyhawk content. Meanwhile, I appreciate the summaries and pointers that you provide here! :D

That's what I ended up doing, Allan. Unfortunately the archives stop at Dragon 364 and Dungeon 155, which means I now have a three issue gap in my Dragon collection. Grrrr...

No telling for sure if that's a "rolling break" that will keep dropping issues from the archive as new ones are released, but I am guessing that's the case, based on the way the archives are set up.

I can report, though, that "The Battle of Emridy Meadows" is well worth it. An excellent adventure.

Good to know all-around, thanks Joe: I hadn't heard about the issue lag for the archives, sounds like I should wait until the final issue is available in there, before opting for the 1 month subscription.