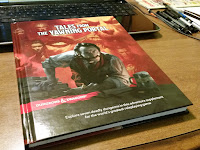 Welcome back folks. This week I finally got my copy of Tales from the Yawning Portal. This 5E book is a compilation of classic dungeon crawls adapted for the new format. I have nothing but admiration for the quality of this work and the art within. Today I'm here to discuss the page count of each adventure as it compares to the original and how this book preserves the Greyhawk content of each chapter. 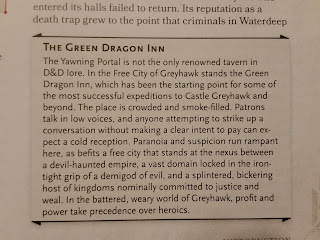 First off the Yawning Portal bar in Waterdeep is the framing device for this anthology, but for Greyhawk fans such as myself, it has an apt replacement for it in the City of Greyhawk's own Green Dragon Inn. From here the adventures can be ran as one offs or as part of a long campaign from 1st to 11+ level. Here they are in chapter order:

The Sunless Citadel by Bruce Cordell.
Page count: 24 (including maps)
Original: 32 + maps
Suggested location in Greyhawk: "The Sunless Citadel is a ruined Baklunish stronghold that was cast into the bowels of the earth when the Suel Imperium unleashed the Invoked Devastation. It is located in northwestern Bissel, in the foothills west of Thornward."

The Forge of Fury by Richard Baker.
Page count: 28 (including maps)
Original: 32 + maps
Suggested location in Greyhawk: "Khundrukar stands in the Pomarj, in the western Drachensgrab Hills. The fortress fell shortly after the Hateful Wars, when a wave of orcs and other evil humanoid invaders swept over the region."

The Hidden Shrine of Tamoachan by Harold Johnson and Jeff Leason.
Page count: 35 (with maps)
Original: 25 + maps and art
Location in Greyhawk: The Amedio Jungle.

Dead in Thay by Scott Fitzgerald Gray.
Page count: 57 (with maps)
Original: 107 (including maps)
Suggested Location in Greyhawk: "Perhaps Rary the Traitor found the Doomvault -yet another vestige of ancient Sulm- under the Bright Desert."

Analysis:  I guess I've always known that 1E modules were short, but compared to later mods from 2E onward, they were thin indeed (due to their convention use). That said it's remarkable that some are increased in page count like Tamoachan and Giants. All in all every adventure seems to have been rigorously redesigned; keeping all the flavor and detail possible of the originals. Only Thay takes a huge page count hit. I never owned that module so I can't comment on what it lacks exactly. There is an additional 20 pages of monsters and magic item stat blocks in the appendix of TftYP which of course would've been found in the pages of the originals further padding these numbers by a few.

I am also happy with the suggested locations in the Greyhawk setting. I'm sure Chris Perkin's hand was involved, but of the three modules not already set here, they managed to find good spots within the central Flanaess. Smart and accessible. I applaude WotC on this effort. Sure, I like the nostalgic stuff better than their original work so far, but I am looking forward to using this book, quite possibly cover to cover.
Posted by Mike Bridges at 7:59 PM

Mike, I haven't got mine yet, but I will probably get in the next month. ~Saracenus

This might be my favorite 5e book to date.
I have been taking my kids through GDQ using the 5e rules and I got this just as they were entering the Fire Giant's Hall.

However, Thor comes second to (and maybe third to Cap) my love of the GotG movies."