Hello Greyhawk and D&D enthusiasts! Today I was digging around in my collection and found this gem, the TSR 1992 Fall/Winter Catalog! In light of D&D's much hyped products and story events, I'd like to tell you millennial gamers that 1992 was a very good era for the D&D. It was the height of 2nd Edition and there was new stuff coming out every month. I remember anxiously going to the nearest game shop (for me sometimes half an hour away) to see what would be on the shelves next (especially Greyhawk). Let's have a look and see what TSR had in store for us 25 years ago! 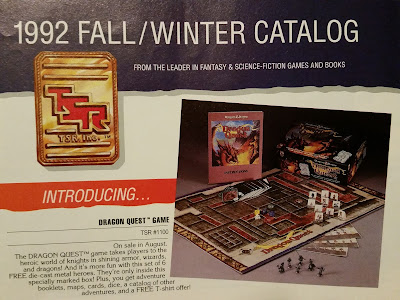 Dragon Quest. Never owned it, however I did have Hero Quest which I suppose was a knock off of one or vice versa. No idea. This set gets you a free t-shirt though! Take note WotC. 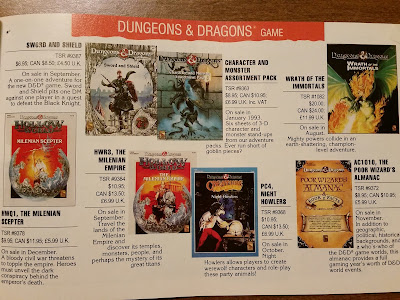 Hollow World and regular D&D products. I did like the Known World and the BECMI sets. After that I didn't collect them anymore. I do wish I had got The Poor Wizard's Almanac though, that looks cool. 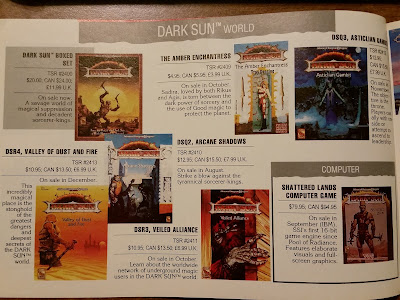 This was a good year for Darksun. Seven products including a computer game for you IBM users. I never got into Darksun, probably because I was too busy collecting the next page... 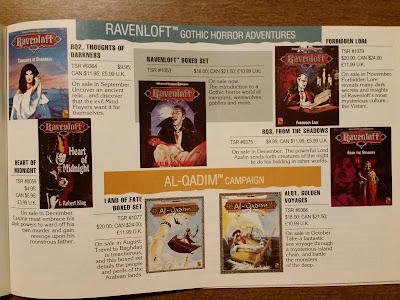 Yes, the 90's was good for Ravenloft setting fans as well. I didn't read the novels, but the source books like Forbidden Lore were my favorite. Ravenloft was always fun to break out on a dark rainy day and I like those books so much I keep them on my shelf rather than stored away. I also admired Al-Qadim. This was a time before it got shoe-horned into Faerun. While I never ran the rules, those books were great inspiration for my own Greyhawk adventures set in the Baklunish West. 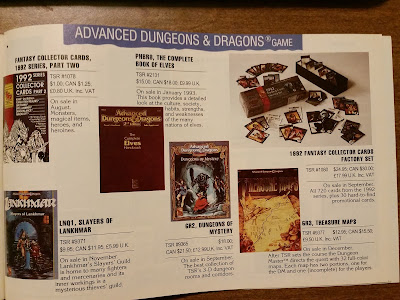 TSR Collector Cards. Good idea, poor execution. They were printed on terrible cardstock, had no custom art (it was all pulled from cropped images out of other D&D books) and in lots of cases had useless information. Sometimes you could find a diamond in the rough, but for canon lore, the cards aren't reliable.
Now, the Complete Book of Elves (Elvis) is the best of that 2E series. It's the book that gave us Bladesingers. Enough said! Lankhmar always made an appearance once in a while. Love the novels, not interested in the setting. 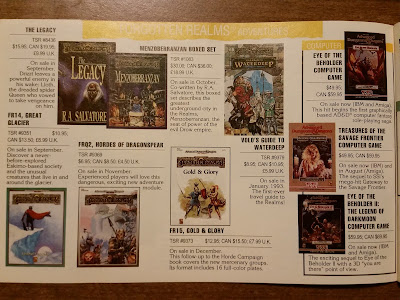 Here we are finally, the Forgotten Realms section. Yes, the 90's was also the ascendancy of FR one needs look no further than The Legacy by Salvatore, Menzoberranzan boxed set and Volo's Guide to Waterdeep. Not to be outdone, FR also had three video games that season (for IBM and Amiga, take that Darksun fans). Enough of that... 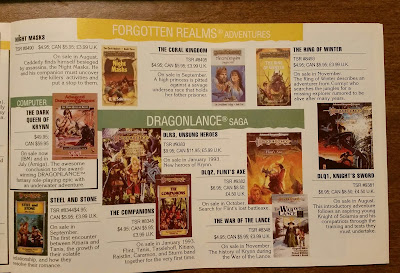 Silly me, Forgotten Realms' novels spill over into the next page belonging to Dragonlance. FR had so many novels that I gave up. I don't know how R.A. Salvatore does it, he writes as much as Stephen King! Meanwhile, Dragonlance still had D&D adventures surprisingly. If any world had MORE novels than FR it was DL. 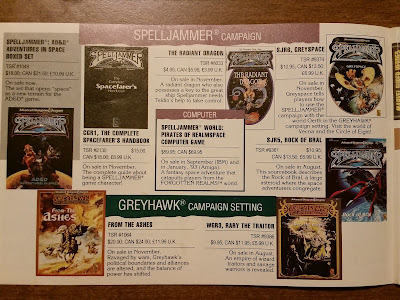 Spelljammer had a good Fall. Source books (Greyspace, woo), a novel AND a computer game. A computer game folks! Below that lineup we then have two sorrowful products for Greyhawk. Just two. No video games for Oerth. What gives? From the Ashes was a nice boxed set, I always liked Carl Sargent's post-war timeline. Rary the Traitor however was garbage. I didn't like the premise of his treachery or the follow up. The book had errors which were later fixed online, it had a terrible cover which was probably intended for something else and just got slapped on Rary last minute, and it had below-average interior art. Rary's only saving grace was that the lore inside on Sulm and the Bright Desert was new to us fans. Later writers would polish this turd to a shine and make Rary's land more interesting. 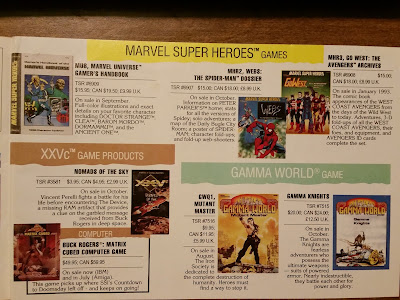 Lastly we have the oddities. TSR's Marvel Super Heroes was the best. Anyone who knows what FASERIP is had fun times in the 90's gaming. I never owned many MSH books, but I always got excited when new heroes were statted out in Dragon Magazine. Back in the 90's we DREAMED of Marvel movies. Nowadays every C-list hero is getting a movie or show. Back then we had to create our own epic stories.

Never got into Buck Rogers as an RPG, but us 80's kids remember the TV show. Then lastly we have Gamma World. This is another game I fondly remember. All we ever had was the base boxed set, none of these supplements, but we enjoyed it alot. It was so weird a setting and the post-apocalyptic genre was fresh in our mind with movies like Road Warrior or toons like Thundarr the Barbarian. Plus, given that we lived during the Cold War, GW seemed like a very possible future to us at the time. Sadly I never bought into the later reincarnations of Gamma World. I guess it's better left in 1992 for me. Thanks for reading.
Posted by Mike Bridges at 12:34 AM

Ahh! Thanks for the memories. Those were the "good old days."

Hi, Mike! JC here (we played together in Carlos and Grodog's games at Garycon) I would be curious to hear more detail on the fixes for Rary the Traitor you mentioned. What blogs, adventures, etc. did the best job of recovering that area?

Scouring the Lands of the Traitor: Into the Bright Desert by Creighton Broadhurst [Living Greyhawk Journal 21 included in Dungeon 98].

http://www.wizards.com/default.asp?x=lg/lgmp/20040810a
Wizards archive of Mysterious Places articles. You can also find stuff on Karistyne Casstle, The Mines of Father Eye and other local sites.

http://www.wizards.com/default.asp?x=lg/region/brightlands
Old Living Greyhawk info, which is probably not available, but focused on heavily back in the day.'

Errata maps from RtT used to be on Wizards site, can't find it there now. Google elsewhere like here: https://secure.profantasy.com/library/default.asp?Product=dd2&PP=9&Start=37&Image=39&OrderBy=

The Spelljammer novels were a concern. They descended quickly into the hero involved in a relationship with a kender (granted she was a radiant dragon) that frankly took D&D to an inappropriate borderland that shouldnt have been aluded to in the slightest.

Sean: That is definitely strange. Couldn't be any racier than the Wolf Nomad novel creepiness that Greyhawk got.

Just read the first 5 Spelljammer novels (can't find the 6th) and the comics. Not good, but nowhere near as awful & creepy as the Rose Estes crap.

The relationship with the Kender didn't really go anywhere and the Radiant Dragon was a distinctly different character. As were the other two or three women that the central character had relationships with.

JC here (we played together in Carlos and Grodog's games at Garycon) I would be curious to hear more detail on the fixes for Rary the Traitor you mentioned. What blogs, adventures, etc. did the best job of recovering that area?