5 Reasons to Visit the Bright Desert 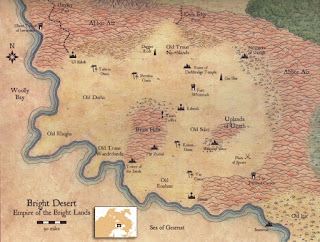 Welcome again Greyhawkers. Today I continue my article series, "5 Reasons to Visit..." If you haven't read my seven previous installments, check this link to the Best of Greyhawkery and peruse those and many more good posts. The subject of the day is: 5 Reasons to Visit the Bright Desert! The Bright Desert is centrally located in the Flanaess and post-wars becomes a nation called the Bright Lands (after Rary the Traitor took the place over). There is a lot going on here besides the wizard Rary (check out Dungeon #98 for more info on the Bright Desert), let's dig in!

1. Shattados Palace. The Bright Desert was formerly the ancient (and evil) realm of Sulm before a cursed crown transformed it into a waste and the people turned into manscorpions. Shattados Palace is one of the few remaining ruins of this ancient time. Found in the indispensable 2E accessory Rary the Traitor, this location is where the last cursed king of Sulm still lurks with his treasures. The location of this place is interestingly not marked on a map which is great for DMs so they can send players on a Raiders of the Lost Ark style desert hunt.

2. Dagger Rock. Other ancient threats lair in the Bright Desert. Deep within the lonely spur of rock in the northern desert, sleeps the blue dragon Volte. Volte is a wyrm (dangerous indeed) who original hailed from the Stark Mounds to the west before being drove out over a century ago. Volte most likely wants to be left alone, but rumor says Rary has been entreating the wyrm to become his ally. A powerful archmage and a wyrm sounds like a deadly combination indeed. PCs will have to be quite experienced to take on this threat before it gets out of hand.

3. Ghost Tower of Inverness. The classic module C2: Ghost Tower of Inverness was first published in 1979 by Allen Hammack and is considered one of the 30 greatest adventures of all time. This is a standard dungeon (tower) crawl where heroes search for the ominous Soul Gem that once belonged to an ancient evil wizard (maybe why Rary was attracted to the region). Though technically in the Abbor Alz Hills, the Ghost Tower is quite close enough to the Bright Desert to get included in this series. This is a good low to mid-level module and can get players started on a campaign that involves the Bright Desert region. Look for a copy online or the PDF if you can!

4. Pits of Azak-Zil. First mentioned in the seminal hardback Greyhawk Adventures, the Azak-Zil (Pureheart in dwarvish) is the site of a meteor crash on the fringe of the desert and hills. Many nations and clans vied to find and establish this mining colony. It was dwarves of Irongate who at last discovered the wealth of iron, platinum, mithril, adamantite and gold at this location. These dwarves became wealthy until one day the flow of ore stopped. What search parties have discovered since then is the pits are now overrun by undead of a strange sort, since they still work the mine and keep it to themselves. What has caused Azak-Zil to fall to undeath is left for PCs to discover. Perhaps they can clear the mines and re-establish operations for a new business interest.

5. The Mines. There is alot of cool adventure locations in the Bright Desert, so if I had one more to choose I guess I'll go with the Mines just cause they have an intriguing ruler, Father Eye. The Mines are a central interest of Archmage Rary because of its connection to the underdark. Scheming duergar dwarves now control and work in these old mines for their mysterious leader Father Eye. It doesn't take much imagination to deduce who or what Father Eye might be. Heroes looking for a good old fashioned mid-level dungeon-crawl would be well-served venturing into the Mines to take on Father Eye and his dastardly duergar.

So there you go. The Bright Desert has so much untapped potential for adventure that I could do two of these articles. To reiterate for DMs, all you really need is Rary the Traitor, Ghost Tower of Inverness and maybe Dungeon #98 to do a full Bright Desert campaign. Much of this source material is in fact underdeveloped so it's also good ground for designing your dungeons or treasures. Have fun with the Bright Desert!
Posted by Mike Bridges at 10:26 PM

I actually have a small group of PC's exploring the Knife Edge Pass, and it's environs, nearby [as far west, as Marstifell]. Generally they've not adventured anywhere near Dagger Rock (though I did have a previous low-level adventure, where some "captured prisoners" were supposed to be rescued). Volte would've been a fantastic adversary!

Well done, you hit all the good ones. I believe Living Greyhawk used all of these locations, as well. Lots of good stuff here to develop and play with!

Yup, Living Greyhawk's Blight on Bright Sands story arc visited all of these places except for the Ghost Tower of Inverness, which was the setting of an earlier module. The relevant titles include at least:

The Blight on Bright Sands series and the three Year 8 modules are all about the conflict between Rary the Traitor and the paladin Karistyne.

Where could we get copies of the Living Greyhawk adventures in the Bright Desert?

Way to go Nitessine! Y'know I think I've read a couple of these now that I read the titles. I wish I had been into LG more just to have these Core adventures to mine.

Yo have got a lot of time on your hands at that front desk. LOL