Hail Greyhawkers! Today's topic is a new one that I felt would be fun to muse about, and that concerns unique or remote locations in the Flanaess for players to establish their strongholds. One of my obsessions lately has been the survival video game Conan: Exiles. In this game, when not fighting undead and dragons, building elaborate castles or bases is my favorite part. Also, one of the hallmarks of D&D is player characters becoming high enough level to build their own strongholds and wizard towers. In either game, choosing a location is important. 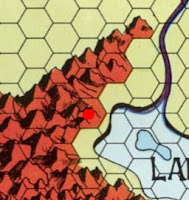 In the World of Greyhawk, finding a cool place to start a domain might be harder than you think. Here is a few suggestions. Mind you, there is hundreds of unused hexes to claim, but you'll see from my commentary why I think these would be nice areas to set up shop. Since I don't have the patience to look up hex coordinates on the Darlene map. Sorry. Instead I've made cut out maps and marked the hex for you. Enjoy!

This first map shows a spur of the Yatil Mountains on the northwest coast of Lake Quag. This hex could either be a highland retreat, much like Mordenkainen's Obsidian Citadel in the very same mountain range or if you prefer, nudge it to the very coast of Lake Quag. This part of the map is north of the also remote Mounds of Dawn, in an area that I'm sure is debatably part of Perrenland. I chose this spot in fact, because its equidistant from Perrenland, Tiger and Wolf Nomad culture. For an idea what kind of monsters may lurk in this wing of the Yatils, perhaps turn to the 1983 Greyhawk Glossography or the AD&D module Lost Caverns of Tsojcanth. 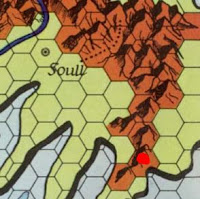 Next up is a look at a region in the Thillonrian Peninsula, specifically the very southeast end of the long mountainous landmass. At a point between what I assume is the lands of the Snow Barbarians (Schnai) and Ice Barbarians (Cruskii) is an inlet or fjord that borders a mountain hex. I think this is a perfect place to situate a private stronghold including a port for a barbarian hero to launch their own nautical quests or raids at Aerdy.

Given the general inaccessibility of this spot, there is a also an opportunity here for some special construction by dwarves, giants or even draconic themes. I like the area politically too, because the neighboring human clans and kings will vie for your character to be on their side in events, or who knows, if you play out the 2E modules Five Shall Be One/ Howl From the North, you could unite these warrior kingdoms from this base of operations! 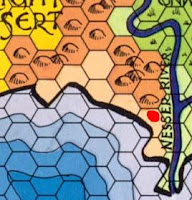 The next map shows a spot in the central Flanaess near the mouth of the Nesser River. This desert-like hex borders the well-trafficked Woolly Bay and is within 120 miles of the Bright Desert (Bright Lands depending on your era). I chose this hex because it may very well be in unclaimed territory. If it is owned by the Duchy of Urnst there is definitely no settlements here. Interestingly, those putting a keep or tower on this hex would be able to search a wealth of nearby ruins such as the coastal remains of Itarr, arid buried temples of Sulm within the Bright Desert or even to the far north, the infamous Maure Castle.

As the hex appears arid on the Darlene map, resources would be quite scarce, so an aspiring lord will have to be very good at trade and diplomacy. If a port is set up here, players could also be involved in the trade that flows to Hardby and eventually to the Greyhawk itself. This sets up some nice interaction then with peoples and pirates across the bay in the Wild Coast and Pomarj. 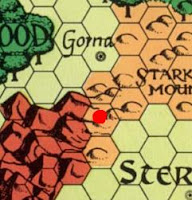 This last location is on the border between the Grand Duchy of Geoff and the Earldom of Sterich within the foothills of the Crystalmists as they turn into the feared Stark Mounds. This hex is a mere 60 miles from the city of Gorna, making it the only selection so far that is not remote. However, the location is deep enough within the Stark Mounds that it is debatably not part of Geoff or Sterich. In either case, resources and trade would be abundant.

The dangers presented in building your stronghold here are many however, so only the highest level heroes should go looking to establish themselves here. This is a region of great turmoil with giant-kind who are continually a threat to overrun entire nations. Unless your stronghold is properly defended, this hex would be among the first affected by a giant incursion. See the classic AD&D adventures, Against the Giants or Liberation of Geoff for a wealth of information.

Furthermore, the Stark Mounds are especially famous for sword wraiths that inhabit old battlefields here. While having undead in your back yard is not a good selling point for most characters, it might be a good detterant for the aforementioned giants. These graveyards could also be a boon for wizards (necromancers) who want a free army for their tower. The possibilities are endless.

Until next time, share some of your own campaign's unique and interesting locations for player strongholds.

I think that anyone building a fortress in the Stark Mounds is going to have to contend not just with swordwraiths but also with gnome neighbors. Not sure which would be worse

Did you realize there's a 12 word phrase you can say to your crush... that will trigger intense feelings of love and impulsive attraction for you buried inside his heart?

Because hidden in these 12 words is a "secret signal" that fuels a man's instinct to love, cherish and protect you with all his heart...

This instinct is so built-in to a man's brain that it will make him try better than before to take care of you.

As a matter of fact, fueling this all-powerful instinct is so mandatory to having the best possible relationship with your man that the second you send your man one of the "Secret Signals"...

...You'll soon notice him expose his soul and mind to you in a way he never expressed before and he will see you as the one and only woman in the galaxy who has ever truly attracted him.