Ring of Five Questions: Round 11 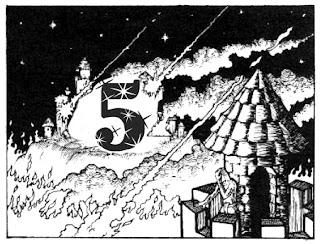 Greetings, Heroes of Greyhawk! If you've been following this blog in recent weeks, you'll know this is the eleventh round of my ongoing Return of the Ring of Five Questions column! If you happened upon this column for the first time, well put simply this is a community participation feature of Greyhawkery. Search back and read the previous installments then email me at mortellan@gmail.com with your own five responses. Remember, you can be as short or wordy as you like in these responses. Disclaimer: I will keep taking entries until the end of 2020 so hurry up and respond before Needfest is upon us!

Let's jump into another fiery Ring with two more readied participants! In this epic clash of Greyhawk enthusiasts we have in one corner, Michael Rooney and facing him in the other corner is Kevin "suprunown" Peden. Let's get it on!

Q1. What is your favorite realm or region in the World of Greyhawk setting?

Michael: After mulling it over to make sure, I must go with my first instinct: the SEA OF DUST.  It's the first thing I learned about the setting on opening the original gazetteer, with Erol Otus' dramatic drawing of the end of the Suel Imperium on the second full page of text. An absolutely perfect hook for the beginning of a book, straight from the pulps, full of mystery (what would a colorless fire look like?) and horror (it rained magical fire that reduced the HILLS THEMSELVES to ASH, goddamn!).  Yet the Suel capital (oddly located deep inland, near the mountainous frontier of the empire) was nearly intact!  Can you say LOST CITY DUNGEON EXPLORATION in the heart of a LIFELESS DESERT, my friends? Seven years of anticipation were rewarded by Gygax's sketch of the Ashen Desert in his third Gord novel, complete with slug-made tunnels, weird plant monsters, and degenerate Suel derro worthy of Shaver, Howard, or Beneath the Planet of the Apes. What of Uattho, indeed?

Tough question. My go to region for using when starting a campaign is usually the Duchy of Geoff, but the region that grabs my imagination the most is actually Zeif.

Wow! Where to start? Kevin goes with Geoff which after recently talking to members of the Living Greyhawk: Geoff Triad on stream, I have been really intrigued to play in this nook of the Flanaess. It's one of the few places left I haven't tried out. Zeif on the other hand is -always- on my mind as well, because they are always trying to exploit poor little Ull. Fools! Michael is no fool though, he crushes this answer with another good choice, the Sea of Dust. He shows some old school Gygax roots here with references to the Gord novels and evoking classic lit that surely inspired this post-apocalyptic region. Michael is right, this is the place that kicks off the boxed set. So yes, I have used the Sea of Dust, but never for long. Why? It has to remain mysterious and feared! One more thing before moving on, Erol Otus might be my favorite D&D illustrator (Trampier is a tie I think).

Q2. If you could actually be one Greyhawk deity which one would it be?

Michael: Boccob's 26 Intelligence is very tempting, but the peaceable, reasonable nature of Rao sounds more pleasant.  Plus, I've always assumed that Rao is the same being as Krypton's supreme deity, and it'd be useful to have the respect of a species of Supermen.

Kevin: Boccob. Definitely Boccob. My longest surviving PC is a mage, and I love playing wizards.

Oh, snap! Kevin and Michael almost took the same form of Boccob! I suppose two avatars of Boccob could've made sense, he is his own best company. At any rate Michael changes last second into Rao, a rare choice being a peace deity, but then he ties Greyhawk into DC Comics? I've discussed the Rao connection before with my friend Jayson who loves Superman, but I've never mused about it on this blog. A superhuman move, sir! Kevin sticks with the 26 INT, ensuring that he is the ultimate mage in all of the multiverse. Comparing the two, Boccob has a staff, Rao a crook. Rao has the country of Veluna (Kryptonians in disguise) and Boccob has um, Zagyg? Like the honey badger, Boccob doesn't care!

Michael: The obvious choice is replacing Greyhawk Ruins with Gygax's own Greyhawk Dungeon.  But while on the topic, I have a wish list: Gygax's City of Greyhawk, the Stoink supplement ("Wasps' Nest"), Skip and Gary's WG7: Shadowlands.  If you object that these are more unpublished vaporware rather than fixing published works, I will cede the point.  For just one "fix," then, I wish that WG4 The Forgotten Temple of Tharizdun had been illustrated by the regular TSR staff artists (ideally Otus, Trampier, and Dee, or at least Easley and Holloway) rather than the artist who made the published module bizarrely uninspiring and utterly incongruous with any other TSR work.

Kevin: Oooooh...toughie. Do I actually try and fix some of the really broken modules, like Child's Play and Puppets? Or do something else? The obvious answer is, redo WG7 Castle Greyhawk to actually BE Castle Greyhawk, but the one thing that keeps jumping out at my and bugging me the most is the From The Ashes boxed set. I cannot STAND the idea that all those generals got turned into souped-up undead monstrosities...really tore the soul out of the game. Actually...pretty much anything they did from Fate of Istus on could probably stand redoing.

LOL both Ring guests had some strong feelings on this Q. Coincidentally, Kevin and Michael both mentioned Skip Williams who was a recent guest on Legends & Lore #73. Go check it out, if you want to hear about what happened with Shadowlands and some other TSR era developments. Good stuff. Anyhow, Castle Greyhawk seems to be the consensus on this part, a Holy Grail that many strive for, but will never be fully realized. I think Allan Grohe or Joseph Bloch are your best champions of this crusade. Kevin hates the animus from the Greyhawk Wars. Ditto. Do I dislike all developments since Fate if Istus? Heck no. FoI should've been reworked though. Michael finishes off this tough Q with his actual wish, classic D&D illustrators in FToT. Hell yes I can get behind that! What happened there?

Michael: Gravestone, from the later Gord novels, is about the toughest NPC villain who isn't an outright quasi-deity or better.  I remember writing up a version of his prismatic monster spell and I had to make it take up two ninth-level spell slots because it was so badass.

Kevin: Hmmm.... well, I would love to have Murlynd leading the charge, but I would settle for one of the lesser members of the Circle of Eight, like maybe Otiluke or Bigby.

Michael picks Gravestone, who I must admit I know nothing about because I've never read (or own all) the later Gord books. Prismatic Monster? Two 9th level slots? WHUUUU? Okay sir, I'll defer to you, if he is that bad ass and not a quasi-deity. Well done! Speaking of quasi-deity, Kevin nearly took Murlynd on his team, but then modesty overcame him and he took Bigby or Otiluke (I'd have to favor Bigby on this one, what has Otiluke really done that is significant except die alot?) Question for Mr. Rooney, can a Bigby Hand Spell hold off a Prismatic Monster?

Michael: The Head of Vecna! Just kidding. Most artifacts and relics are extraordinarily dangerous.  About the only ones I'd be willing to risk keeping are the Cup and Talisman of Al-Akbar, whose malevolent powers only affect neutral or evil users.  I guess that would keep me Good!  The weekly curative magic (if I were a cleric, which I guess such an artifact would persuade me to be!) would be worth it.

Kevin: Actually, the only artifact I would want is the one my longest surviving PC owns (in my plane of gaming...) - Queen Ahlissa's Marvelous Nightingale.

Kevin closes out the Ring with a surprise choice that I haven't seen before, the Nightingale! Very nice! I have never used this item sadly. Artifacts are the best because they weave ancient history into the present timeline. Mr. Peden shows he has a sense of history by holding onto Queen Ahlissa's most treasured item for a long time. I would expect that from a guy who embodies Boccob and hangs out with the Circle of Eight. Michael finishes off this incredible round of the ring with a set of artifacts: The Cup and Talisman. This is one of the few sensible choices out there isn't it? He must be a really Good person if he is an avatar of Rao and uses those items. His right hand man is kinda sketchy though...

Alright folks, that ends this round. Thank you to Michael and Kevin on some thrilling answers. Stay tuned for some more Ring of Five Questions action!

Gravestone was probably the most memorable mortal adversary of Gord's.

It's actually "Peden", not "Pederson".... but close enough. 8) And I go by many aliases.... suprunown and The Badger King being the two most common right now. 8)

Kevin: I apologize for the brain autocorrect of your last name. In my line of work last name accuracy is essential, I will fix it now.

Also, I am most familiar with the name "suprunown", not sure if I have interacted with you as Badger King, but I dig the nickname!

Has anyone else noticed the "Rive of Five" thing yet?