Rive of Five Questions: Round 12 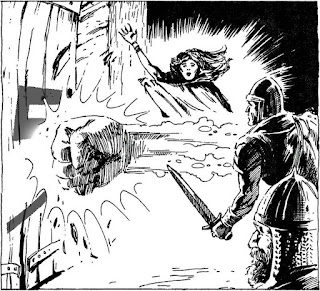 Welcome again, fellow Greyhawkers! If you've been following this blog in recent weeks, you'll know this is amazingly the twelfth round of my ongoing Return of the Ring of Five Questions column! If you happened upon this column for the first time, well put simply this is a community participation feature of Greyhawkery. Search back and read the previous installments then email me at mortellan@gmail.com with your own five responses. Remember, you can be as short or wordy as you like in these responses. Disclaimer: I will keep taking entries until the end of 2020 so hurry up and respond before Needfest is almost here!
Let's slide back into the Ring with a couple more willing participants. First is a new reader to Greyhawkery, but nonetheless a very knowledgeable fan of Greyhawk, Rich DiTullio. And sharing the spotlight with him is William "Giantstomp" Dvorak of Wicked Studios; Greyhawk blogger, streamer and Oerth Journal author. Let's see what these two have to say...enjoy!
Q1. What is your favorite realm or region in the World of Greyhawk setting?

William: This is a tough one as I like adventuring, and running, all over the Flanaess. If you were to hold my feet to the fire though I'd have to say the Bandit Kingdoms. There is a ton of diversity there before and after the war with the different Free Lord realms. Of those of course my favorite has to be Rookroost. What better place to place adventures with characters that have flexible morals.

Rich: I love the Ulek states for the start of an adventure especially the Principality.  The realm being controlled by demi-humans makes almost any combination of heroes makes sense to be from there.  You can strike out in so many directions: north to the Suss Forest, Wild Coast, or Celene, south to take to the sea and encounter the Sea Princes and Saltmarsh, and of course who can resist heading east to try and find the hidden treasures of Pomarj from under the noses of the goblinkin.

William like many of us have travelled all over the map and find it hard to pick a favorite. But yes you can't go wrong with the Bandit Kingdoms and Rookroost. The map and info on that city in Fate of Istus is the only reason to get the module IMO. BK is right in the middle of the action from Greyhawk Wars to White Plume Mt to Age of Worms. Good choice! Rich going with the tri-states of Ulek is also a smart decision. I always imagined the realms like Tolkien. The duchy is Rivendell, the county is the Shire and the principality is Moria/Iron Hills? Well said Rich, its a great launching place for heroes.

Q2. If you could actually be one Greyhawk deity which one would it be?

William: Brandobaris. He's a great god for adventurers and he's a halfling so what's not to like? He is the ultimate trickster god and playing tricks and being able to get out of a jam in a pinch would be helpful.

Rich: Zagyg, no question.  He saw Greyhawk in a way that no one else ever did or will again and followed that crooked path all the way to godhood.

Rich brilliantly goes with Zagyg. He again shows some insight I haven't seen in the Ring before. Zagyg indeed is the driver in much of Greyhawk lore so what better god to embody, even if he is mad as a march hare. Will OTOH goes a humorous direction as well, but instead he reveals that he's a little prankster at heart. IMO Brandobaris is a very very rare choice for the Ring or even for a character patron, kudos sir! Moving along...

William: Well, I have to go with the one that is freshest in my mind and that would be WGS1 Five Shall be One. In the adventure, that sets up the Greyhawk War, Iuz tricks adventures into collecting the 5 Blades of Corusk. Well, if you collect all 5 it's said that it would free Vatun from his imprisonment. The blades are collected but Vatun isn't freed. Instead, they simply disappear, and then Iuz pretends to be him. Boo, I say! If the 5 swords came together then Vatun should have really come back and then put a beat down on Iuz for trying to dupe his people.

Rich: Fate of Istus.  I remember the first time I tried to run it.  We finished the first encounter and now they are heading to Rel Mord for the second encounter.  They need to be at a higher level when they arrive but they ignored every adventuring hook because of the threat of the plague.  That is when I realized this one just wasn’t going to work as written and I never did quite figure out how to get them hooked on the mystery of the plague and so that they would continue to follow it from city to city. It still disappoints me to this day.

Five Shall be One (and Howl from the North) is a popular sentiment for me and others in the Ring. I love the concept, but the pay off was not there I agree. Iuz duping PCs and entire nations always left me wondering, is Vatun supposed to be real or a figment of the barbarians? I mean, Carl Sargent did create him without prior development. Who knows! Meanwhile, Rich brings Q3 back to what I was saying earlier, FoI is only good for the source material. It's a concept that could work, I imagine Paizo could've done better with their APs, but as wishes for a redo go, yeah please Istus rewind time.

William: Obmi. What can I say I've been a fan of this guy since I read about him in the Gord books. Besides that he's had a long career working for Giants and Iuz, he's just a great bad guy. Girdle of giant strength, dwarven thrower, boots of speed, and a murderous attitude, what's not to like.

Rich: Bigby.  With all the plotters, schemers and cryptic mages out there, it is refreshing to have a mage dedicate his life to making bigger magical fists to punch people with.

Rich cracks me up. Yeah, Bigby does have a simple charm to him. Don't mess with Bigby. Also those hand spells are good to keep the team in line! Mr. Dvorak gets serious now with Obmi. If he's putting together a team led by this evil dwarf then it must be a hard hitting team indeed! On to the last Q...

William: Blackrazor! Hands down man, the scariest and baddest sword in the game!. All you have to do is keep it fed and it will be happy. :-)

Rich: As dangerous as it would be, I’d want the Codex of Infinite Planes.  The lure of instant travel to so many other worlds would be irresistible.

William the avatar of Brandobaris isn't all fun and games after all. He wants to possess a soul sucking sword?! Well with Obmi leading your NPC team (probably out of Rookroost) then I suppose you'll have a ready supply of victims for Blackrazor. Maybe he can outfit Obmi's team with more magic blades, say...five of them? Rich finishes off this stimulating round of the Ring by selecting the Codex! Like William, Mr. DiTullio likes to flirt with danger. He is crazy as Zagyg after all! The Codex may be fun and have all these powers to see other planes and stuff, but eventually, fate, Istus y'know, catches up to those who use the Codex. However, with Bigby and his Ulek friends involved, maybe Rich can convince Istus to re-write his fate. Okay enough riffing for now!

That was a great round! Thanks to William for your responses. See you on the streams! And thanks to Rich, don't be a stranger! If you or anyone else reading who wants to get more involved in the community or would like to just hang out with Greyhakwers go to Twitch where you will find a wealth of community activity like LordGosumba channel or on Facebook's many Greyhawk groups. Until next time!