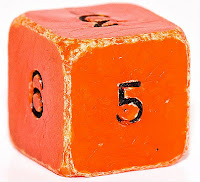 Welcome back fellow greybeards to another installment of the Ring of Five Questions! Last time we got some insightful answers from Living Greyhawk's Creighton Broadhurst. Facing the Ring today is another of the Greyhawk community's finest and most knowledgeable old school fans, Allan "grodog" Grohe. Allan is best known in Greyhawk circles for his long running fansite The Grodog's Greyhawk Adventures and an incredible run of articles on the fansite Canonfire! Allan was also once fortunate to have a Greyhawk article published in Dragon Magazine #299 titled All Oerth's Artifacts. Presently, Allan is still heavily involved in the old school gaming scene and is co-founder of Black Blade Publishing. Now without further ado, let's put Mr. Grohe to the Ring of Five Questions:
Q1. As a long time Greyhawk fan, you should know the Darlene map by heart. What is your realm of choice in the World of Greyhawk?

Allan: In terms of my favorite place to run Greyhawk campaigns, I really do prefer the central Flannaess:  from the Nesser River in the east to the Lortmils and Whyestil in the west, and from the Pomarj in the south to the Rift Canyon in the north. In terms of my favorite places that inspire adventures in Greyhawk, the Valley of the Mage, Rift Valley, and the Land of Black Ice have piqued my curiosity and interest since I first discovered them in the Folio.  Carl Sargent's Isle of Lost Souls is equally fascinating!

Q2. If you could be one Greyhawk deity which one would it be?

Allan: Hmmm.  I've always had a lot of interest in Olidammara and Phaulkon, and Kuroth once he was promoted.  I found Marc Tizoc's portrayal of the priestesses of Wee Jas very compelling, too.  So likely one of those four.

Q3. Greyhawk has had it's ups and downs over the decades. What do you think was the biggest mistake made in published Greyhawk?

Allan: Wow.  That's a tough one---there are so many to choose from!:
- the failure of TSR to publish Castle Greyhawk and the City of Greyhawk when Gary was still in control of TSR.
- the cancellation of WG7 Shadowlands by Skip Williams, and of Steve Marsh's Starstrands planar modules.
- the publication of WG7 Greyhawk Castle by TSR after Gary's ouster.
- the failure of New Infinities to publish Castle Greyhawk and the City of Greyhawk.
- the decision to stop publishing Greyhawk and focus on the Forgotten Realms during the 2e era, despite the two product lines being nearly equal in sales.
- the "Return To..." series of products, which set the example for 3.x and 4.x's inability to produce quality new Greyhawk adventures (instead relying on the rehashing of old standbys)
- the decision to not follow-up on the popularity of the Living Greyhawk Gazetteer with more published Greyhawk products.
- the decision to not publish Living Greyhawk RPGA modules.
- the decision to close the Living Greyhawk campaign at the height of its popularity.
- the decision to mine Greyhawk as a source for names in the multitudes of 3.x rulebooks (and perhaps 4.x, I'm not really in touch there).
- Gary's prioritization of Yggsburgh for Troll Lord Games over the publication of Castle Greyhawk.
The failures to publish Castle Greyhawk probably irk me the most personally, but I think that the most damaging mistake to the Greyhawk setting and fanbase was the 2e era decision to shut GH down in favor of publishing FR content:  I think that set the stage for the 3.x strip-mining of Greyhawk NPC and deity names, locations, and such---so, it's a double-whammy of sorts.

Q4. Judging by your writing credits, you know your Greyhawk artifacts. Which is your favorite?

Allan: Hmmmm.  That's a tough question, since I like so many different aspects of artifacts:  I love the historical snippets in The Codex of the Infinite Planes and the Vecna/Kas items; the mythological and literary ties to Baba Yaga's Hut and The Silver Key of Portals; and the fun in creating new artifacts or adding to the history of others, like Druniazth or Kuroth's Quill.  (In my regular column From Kuroth's Quill in Knockspell magazine, I often create new snippets of lore extracted from The Fables of Burdock, The Demonomicon of Iggwilv, and similar sources). In the end, I think that Tenser's Fortress of Unknown Depths captures the spirit of all of these qualities, and it's probably tied with Kuroth's Quill as my favorite artifact.

Q5. If you could publish a new Greyhawk megadungeon where would you place it?

Allan: If I could publish any Greyhawk mega-dungeons, my first choices would be Castles Greyhawk and El Raja Key, of course.  Followed by Castle of the Mad Archmage and my own version of Castle Greyhawk.  But, if I'm to be publishing a brand-new mega-dungeon, I think some sort of large ruined ice city set in and
below the dusky glaciers of The Land of Black Ice would be quite fun (although pretty remote, of course...). 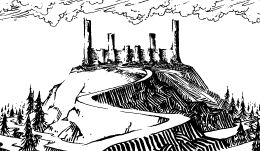 Grodog was next in line. I like these fast five questions interviews.
Keep them coming mort.

Mr. Grohe nailed it on the Greyhawk strategic errors.

As Scottsz has already pointed out .. Grohe was dead on with the GH stratigic errors... it left to a mass exit by most ( myself included) Only by finding Canon Fire have I returned from the shadows.

I wish I ran WotC: one of the first things I would do is cut Grohe a very large check and put Canonfire on the payroll...

I'd make Greyhawk have different campaigns in different time periods of that world, so people could play Boot Hill-like games on the shores of Nyr Dyv (they would call it North Dove), or jump to a Gamma World campaign in the Hommlet.

Glue it all together like Time Bandits... and let the players and DM's go nuts with it.

Thanks guys!: you warm the cockles of a grognardly DM's heart :D

I think the failure of Greyhawk at TSR post Gary came in part because nobody "owned" it. FR has been successful in part because Ed Greenwood has never left TSR/WoTC (albeit he's always a freelancer), and there's a sort of built in "approval" and access to his lore. Between those two areas, if I was going to support the setting, I'd choose to work with the guy I still had good relations with. Since Gary's departure the GH fan base has always been divided. Add the initial disrespect of the earliest post-Gygax projects and you can see how divided some of the fans are. Even with people like Sargent and Mona working on it, there'd always be this tension.

As far as failures to public Castle Greyhawk by Gygax, it was always a lesser priority, and Yggsburg was him creating a home base. I think we would have had levels if Gary's health didn't take a turn for the worse--and if Gary didn't end up "leaving his baby behind" in a creative sense. (Plus, no matter what, for some people if it wasn't official TSR/WoTC Greyhawk it wasn't Canon).

I definitely agree with Allan on the "strip-mining" of Greyhawk into core D&D. By doing that, they've pretty much hurt any chances of potentially saving the property. If you move all the key figures and personages into D&D core and then change the D&D core, there is no hope of this ever being sold off or licensed to another producer, since now everything is blurred together from a legal perspective.

Thank you, Grodog, for your willingness to offer us your insight and opinion. We really appreciate all you do for our Greyhawk community.

Good comments everyone. My thanks go out to Allan for his lengthy answers!

Reviving this article after being directed from Kuroth's Quill.
Anytime "grodog" is mentioned, my ears perk up and I often find a pen or pencil in hand to jot down a few notes. Since this article is almost 9 years old, I have to ask...are these still going on?
Good gaming to all!

Gary: As you have pointed out I have not kept doing these interviews. It's a good call out though because through Twitch I've made many contacts who would fall over themselves to do this column. I'll have to ponder this moving forward.

Having a monthly or bi-weekly guest on Twitch would be great. Thanks for responding.

Having a monthly or bi-weekly guest on Twitch would be great. Thanks for responding.

Very kind of you, Gary. Thanks!

Mike: it might also be fun to update with people---either some of the same Qs to see if answers have changed, or different Qs too! :D