Sea Princes #15: To Be Continued 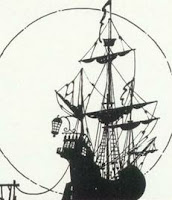 I got some slightly bad news. Due to some scheduling issues with another campaign I'm in and other obligations involving the gaming podcast I am involved with on game night, the Sea Princes campaign is being put temporarily on hiatus. This of course is a rarity for me, to stop at 3rd level and only after about 14 or 15 weeks. My campaigns usually span a dozen levels and last full calendar years, but the bright side is, the Sea Princes campaign has been such a success that I am confident we'll be back on it the first chance I get. This is in large part due to my serializing the guy's weekly adventures here on Greyhawkery, and the wealth of additional campaign material I've done (like the South Seas map) and still plan do in the near future (NPC sketches and more).
So don't fret readers, sails will be unfurled again and quest for the Well of All Heals will will resume.

In the meantime, since last time, here is some more information gleaned at the meeting with Captain Rennaud and Count Tydan of Port Torvin...

Count Tydan was given Rennaud's coded map to the Well in trust while the Bird of Prey was repaired in Torvin. The damage caused to the Bird (before the PCs had joined it) was caused in a battle at sea with the Crimson Fleet ship Malady. Captain Rennaud told the Count all about the venture and his benefactor eagerly decided to invest in it, but first he tested the captain's loyalty by sending him on a test run to Narisban, sending Tydan's less-than-appreciated son Araxo along. Rennaud was not worried about being double-crossed because the map is indecipherable to even him.

Now presently, Rennaud has revealed that the map was made by a sage from Gradsul, Keoland who specialized in ancient cultures and holy sites, named Lockard Meek. somehow the map was possessed by his father, then brother and was then passed to him when he fled to the Hold. Lockard however had moved on as well and hasn't been seen in the west for many years. Captain Rennaud now knows the sage lives in the port of Scant in Onnwal and plans to sail there and consult him on the mysterious map. Araxo of course being young was skeptical about a hunt for the fabled Well for it has been heard of in all races and cultures.  It is generally agreed that the Well is some sort of water source of such power that it can heal the slightest wound or affliction, even restore severed limbs and possibly even bring the dead back to life! The captain assured him that he believed in these same children's stories:

Once a blind mother,
And her lame brother,
Went to heal at the Well.
Child, if you are Good,
I'm sure that you could,
Find it, if you don't tell.

His belief was further reinforced by the cryptic evidence on the map and another more ancient olven rhyme he heard from his crewman, Piper Kellin:

Your bones have been broken;
Many wounds, how they sting.
But your faith has awoken,
A crystal healing spring.
Hidden by dark trees.
Far beyond the Seas.

With the goal set and ship readied, Count Tydan then declared that he would send Lord Ronaldo Key, Araxo's bully of a cousin, as his representative on the voyage. Any harm to him would be a slight to the Count so the captain vowed that he and his officers would protect him. Secretly however, the scheming Araxo began formulating a vindictive plan of his own to somehow derail the quest for the Well of All Heals and thus spoil a victory for his father.

Sorry to hear about the hiatus, Mort.

Looking forward to the gang's return. sounds like the "story's" still going get and getting more interesting.

I have been enjoying the campaign so far. Hopefully it will return soon.

If I have anything to say about it, we'll return to it ASAP. We're all enjoying the campaign and we wanted to devote ourselves to it fully, without distractions or skipping sessions here and there.

There you have it! I think it could potentially be our greatest campaign in years.