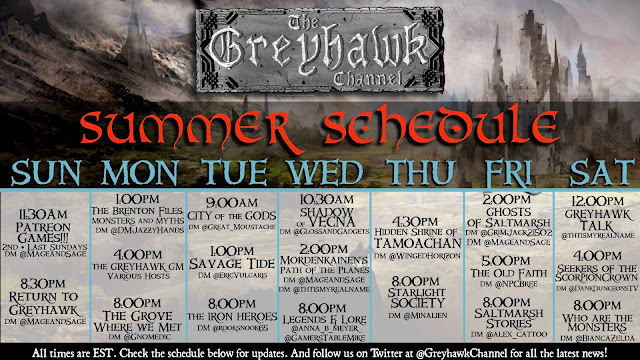 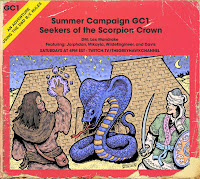 Welcome Greyhawkers! Summer is heating up on the Greyhawk Channel at Twitch. There is literally a Greyhawk show every day of the week and then some. Besides staples of the channel like Return to Greyhawk, Mordenkainen's Path of the Planes and of course Legends & Lore with Anna Meyer and myself, there is some new faces and stories to check out.

So far my favorite new entry is Seekers of the Scorpion Crown DMed by Lex from the youtube show DankDungeonsTV. This adventure is set in the Bright Desert and has some clever title graphics and maps to go along with it.


The map for Seekers is by Daniel F Walthall who is an aspiring fantasy cartographer. This is a well researched and colorful rendition of the region first popularized in Rary the Traitor. 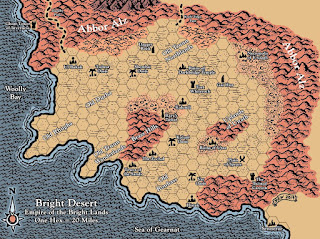 Do you like high seas adventure? Eric Vulgaris' Savage Tide game continues on Tuesdays, but this time there is more! Friday, there is two, count em, two Saltmarsh shows. Ghosts of Saltmarsh earlier in the day is handled by the veteran duo of Grimjack and DMShane. Then later in the day is Saltmarsh Stories which haven't seen yet, but from the sounds of it, adds even more nautical adventure to the lineup.

I also have to point out a couple other shows ongoing this summer by original GHC cast members now running their own games. Sandwiched between the two Saltmarsh shows is The Old Faith, a creepy romp in the Dreadwood Forest, DMed by NPCBree. Then there is the Hidden Shrine of Tamoachan ran by WingedHorizon.who is probably the best person I know who can capture the feel and fear of this Greyhawk classic.

Also, these two and many more of the stalwart fans and cast members of the Greyhawk Channel (not me) should be descending on Indianapolis very soon! Gen Con 2019 fast approaches on Aug 1-4 and they will be there in force running a bunch of games and hopefully streaming some content for the rest of us who can't attend. There is plenty more shows to tell you about, some I haven't even got to see yet. Give them all a look, hang out, meet the cast, maybe throw some love their way. Who knows, maybe you could have a show on the Greyhawk Channel someday!
Posted by Mike Bridges at 7:54 PM