My Ghosts of Saltmarsh Review 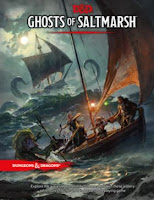 Ahoy, Greyhawkers! I don't review just any D&D product as you know. I often promote them, but I'll only dig into them if there is a really good Greyhawk angle to discuss. Well, Ghosts of Saltmarsh is really good and as you've heard it's VERY grounded in the World of Greyhawk.

First, it bears repeating here that Ghosts' "Greyhawk pedigree" is amazingly good given the path of classic adventures that comprise the book. The Sinister Secret of Saltmarsh, Danger at Dunwater and The Final Enemy are all firmly located in the Keoland/Hool Marshes area. The Styes by Richard Pett was made with Prymp in mind and Tammeraut's Fate by Greg Vaughan is set in the south coast of Nyrond. Mr. Vaughan is a stalwart having written many Greyhawk themed adventures in Dungeon back in 3.5E. Salvage Operation is by Mike Mearls, the head-honcho of D&D, but also an avid Greyhawk fan.

Saltmarsh is perfect for a coastal setting book of course, not because it's big and iconic like Waterdeep, but because it's remote and generic. These traits are often why Greyhawk is the setting to turn to for D&D campaigns. Needless to say the ship sailing rules are effective and easy, building upon info already presented in previous 5E books, not superseding them. I am also jazzed about the ship upgrades in Ghosts, because it can get boring for one sailing vessel to pretty much be identical to the next one. This book also gives players some new character backgrounds that tie wonderfully into a nautical themed campaign, and then update familiar ones from the PHB to also work best with Saltmarsh's region.

A fun feature of Ghosts is the three factions which fit neatly into the setting. Traditionalists like the way things are in Saltmarsh and have been there a long time. Loyalists are fairly new to the town or favor bringing the region back under control of the Kingdom of Keoland, and then the Scarlet Brotherhood faction is well, the Scarlet Brotherhood we all love, sneaking and spying! This Saltmarsh is clearly set in the pre-Wars era because otherwise the backdrop of this book would look difficult, not to mention, most of these modules were written before the publication of Greyhawk Wars anyhow. I personally approve of this early part of the time line for it is has a high emphasis on adventures and exploration, less so on pointless war and destruction. Indeed it's the era that I've based my Hold of the Sea Princes campaign upon and will continue to now that this book is in play.

Ghosts really does emphasize the Greyhawk setting. Maps in this book are done by Dyson Logos and Mike Schley. The section on geography is a huge boon to anyone wanting to learn more about the setting because there is info on the town of Burle and Seaton. The Dreadwood and Hool Marshes are heavily detailed, along with encounter charts. The Azure Sea is even given some good encounter charts, including my favorite bit, a few unique pirates of the region. When I say unique, I'm not kidding either. You won't find these crews in any pirate movie you've seen before!

Furthermore, Ghosts offers DMs many, many wonderful charts to help create mysterious islands, ocean dangers, random ships to keep the campaign going beyond the adventures presented in between. This is a must own book whose usefulness can go beyond 5E rules. 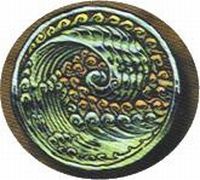 Lastly, go check out DMsGuild now and you'll see Saltmarsh is an approved "Story Line" for 5E authors. Indeed, there is already several new Saltmarsh publications on the site which I have yet to check out. At any rate, sorry folks, according to WotC staff it's not a true setting, but yes you can write about, uh, let's just call it the "World of Saltmarsh" perhaps? Just be sure to keep your Greyhawk references coming from a Ghosts of Saltmarsh perspective. I mean if Procan (in the book) is worshiped in Saltmarsh, why not nautical deities Osprem and Xerbo as well? Oh, and those priests brought the religions to the port town from across the Azure Sea (in the book) in the neighboring Sea Princes (in the book) port called, um let's see, I got it, Monmurg. Meanwhile, here's a bunch of useful NPCs from Monmurg who are visiting Saltmarsh (some could be Scarlet Brotherhood spies, shh), and hey you already finished the six modules in Ghosts, well these guys have heard of some other places to adventure very close to Saltmarsh like Beyond the Crystal Cave, the Sentinel or Baltron's Beacon. See, I can do this all day. Come on Wizards, open up Greyhawk to the fans!
Posted by Mike Bridges at 5:16 PM

Love the fact that they incorporated The Scarlet Brotherhood in there. I wonder if that means we could write an adventure specifically for the Brotherhood and sell it on DMsGuild. In any case, this is great collection of adventures. Too bad there is only one Schley color map. It's wonderful as usual. The rest are either B&W Schley maps or the primitive Dyson maps. All the 5E books had beautiful maps until 3 books ago WotC decided to be cheap, hire Dyson and go the B&W road. That's fine for 1E or 2E, but it feels really shoddy for 5E.

Nebbiolo. I can see your complaint. As an overall work of art, the color maps tie the art and all together. As an adventure I'm going old school here and saying B&W is easier to read and DM. Sometimes color maps are too busy and are no help if my players won't get to see them anyway. It is something to think about.

Ah, but this is the age of VTTs (Fantasy Grounds and the like). Players *do* get to see the map, and believe me they're not happy with B&W maps once they've run a few campaigns with beautiful color maps.

Touche! I had not thought of VTT. Damn my old school ways.

Thanks for the review Mike! I've not checked Ghosts out yet (didn't make it out to Free RPG Day today, since we don't have any participating stores in Wichita), but your review sounds promising given the new Greyhawk material in the book.

What's your estimate on how much of the book is new vs. reprinted stuff?

grodog: My estimate on new vs old is 50/50. The context is old stuff, but like a song remake its a new arrangement. Hard to really say.