Welcome back fans of Greyhawk! By now you've seen that I've been posting updated notes and narratives on my old 1990's 2E campaign. Back then we didn't need Carl Sargent to blow up the Flanaess, we did wars and we did them frequently. If you're just visiting this column for the first time go back and read from my list of wars below (yes I realize I didn't do them in chronological order). Once you're caught up revel in the fantastic disaster that is the 3-Month "Scarlet" War. Enjoy! 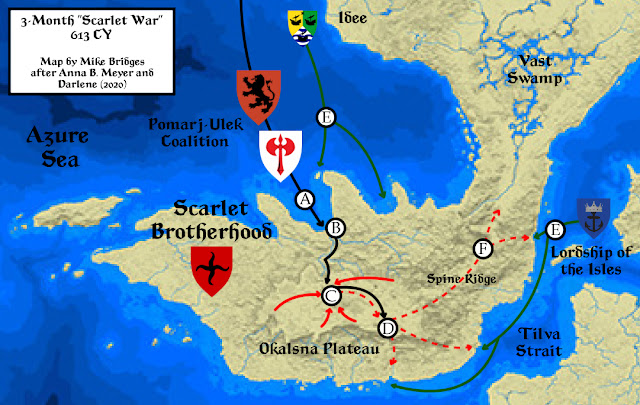 In the months after the defeat and capture of despot warlord, Turrosh Mak, the Pomarj (Poor March) and its untapped natural resources again attracted a multitude of honest, hard-working peoples from the Wild Coast to the Principality of Ulek and beyond the Azure Sea. Under the watchful eye of forces from Celene and the Ulek States, the remaining Pomarj humanoids tribes were kept at bay in their remote territories on the peninsula, while cities like Highport, Blue and Stoneheim were being rebuilt. All of this prosperity and reconstruction was initiated under the administration of elven Archmage Mortellan, the heroic conqueror of the lawless Pomarj.
While the region recovered from three years of war, Mortellan was not so complacent. Acting without consultation from his liege, Queen Yolande of Celene, the fiery wizard surprisingly declared war on his old personal enemy the Scarlet Brotherhood1. Though the Brotherhood had not been heard from since their navy was destroyed by the Iron League in 611 CY, Mortellan proved a threat existed to his allies; he exposed the Scarlet Brotherhood as secretly controlling the Hold of the Sea Princes, a strong seafaring nation that had briefly attempted to side with Turrosh Mak not that long ago. Confirmed by the Kingdom of Keoland, the Sea Princes were in fact building up an armada of warships along with remnants of Wild Coast pirates and pirates from Kro Terlep to strike at every port on the Azure at the Father of Obedience’s command2.
Queen Yolande objected to Mortellan’s war declaration and withdrew all elves back to Celene. Despite her vassal’s insolence, allied contingents of the Wild Coast and the coastal Principality of Ulek stood to be affected, so remained with the new Pomarj regent. As Archmage Mortellan gathered his troops, he gained a new alliance in Keoland, whose merchants feared warfare from the Sea Princes the most. King Skotti lent the aid of a fleet of warships and marines to help in the coming war.

Like in his Pomarj Campaign, Archmage Mortellan again shocked his generals with a bold strategy. The coalition forces would not confront the Sea Princes as expected; instead they would strike at the heart of the Scarlet Brotherhood homeland, its hidden capital Hesuel Ilshar. This course of action naturally troubled the allied commanders, who had never heard of such a place. Mortellan’s previous encounters with the Brotherhood’s assassins however, had provided him information and maps of the city. Indeed, he had personally been to the plateau city not that long ago3.
With the assistance of the Keoish navy, the allied army was transported along regular trade routes on the eastern Azure Sea. The Iron League, initially unaware of this war, allowed the warships to safely pass through their waters, especially if it meant sticking a dagger in their enemy.

A): The Brotherhood port of Kro Terlep was unprepared for an invasion. Mortellan’s magic had afforded his fleet many tactical advantages and the allied warships easily dispatched what resistance they met at sea.
B): With Kro Terlep taken, the hidden capital would surely be warned by the Brotherhood’s network of forts and watch-towers, a defense meant to slow any invading army on their ascent up the Okalasna Plateau. Archmage Mortellan along with his lieutenant, the former knight Angus Ulrich, spearheaded the army’s column, tearing down the Scarlet Brotherhood’s defenses with a devastating combination of fire and steel.
C): The wizard had guessed correctly that the Brotherhood never expected anyone to actually attack their home, much less locate the hidden city. The opposing armies of the Scarlet Sign were no match for the allied attackers, losing decisively in each skirmish. Their army was a mixture of imported Hepmonaland shock-troops, paid humanoid mercenaries and inexperienced Suel-blooded levies, all driven to fight by domineering red-robed monks. By the end of the month, the Ulek-Pomarj army was now arrayed outside the beautiful walled city of Hesuel Ilshar. While Lord Ulrich raised a siege, Mortellan and his allied spellcasters began to use magic to weaken the defenses of the scarlet city using the advance information he had acquired.

D): The mysterious tripartite rulers of the Scarlet Brotherhood refused all Mortellan’s offers to negotiate a surrender. Left with no other option, Lord Ulrich launched the final attack. The defenders attempted to repel the allied assault at first, until it became apparent to Mortellan that the Brotherhood was not going to allow their city to be taken whole. In a show of fanatical defeat, the inhabitants of the capital were ordered to burn and destroy their own city before abandoning it. After a full day of battle, what remained of Hesuel Ilshar was conquered.
E): Meanwhile, some members of the Iron League had responded to news of the Pomarj-Ulek invasion and rallied their fleets to join the war effort. Ships from Idee and the Lordship blockaded every known port, fort and fishing village on the peninsula to allow no escape or reinforcement. Pirate ships loyal to the Elder Cousin of the Brotherhood were thus turned away, fleeing west into the Olman Isles without any other safe harbors.

The Keoish Navy and warships of the Principality of Ulek then redirected their focus in an impressive show of brinkmanship, effectively ending the Sea Princes build-up. The Hold fleets returned to their ports, assured that the scarlet monks and assassins could no longer pull their strings. F): Meanwhile, the last loyal refugees of the Scarlet Army had fled into the rugged Spine Ridge.
Throughout the peninsula, the civilians of the former Scarlet Brotherhood, largely oppressed or enslaved to begin with, were now rejoicing for their fair conquerors who promised to rebuild. Much to Mortellan’s displeasure though, the rulership (except the Elder Cousin, who surrendered) had vanished completely from the city, along with a thousand-years’ worth of Suel wealth and artifacts4. The Scarlet War was over and Archmage Mortellan renamed his newest domain, Ilshar5.

1. For reasons not known, “Flame” Assassins sent by the Brotherhood’s Foster Uncle had harassed Mortellan and his compatriot the barbarian hero Valkaun Dain for years. It was no surprise then that Mortellan would leverage his allies into this retributive campaign.
2. Korenth Zan, the aging head of the ruling Brotherhood monastic order was insanely distraught after the stunning loss of their navy in 611 CY, included the death of his oldest son; a relationship unknown to few outside the tripartite government. This loss drove him into isolation, effectively leaving control at that point, to the Foster Uncle and Elder Cousin to pursue their agendas including an alliance with the Sea Princes (speaking on behalf of the Father of Obedience of course).
3. Archmage Mortellan, with help (Lord Ulrich or Valkaun?) had discovered Hesuel Ilshar through divination and went on a secret mission to dissuade the Brotherhood from meddling in their affairs. Their raid on the Monastery of the Scarlet Sign resulted in the assassination of seven ranking monks before they teleported away.
4. It was eventually learned that the monastery and ruling elite had facilitated their escape by well-made secret tunnels and teleport circles. While many lesser members were later rounded up in villages and jungle hide-outs, the leading monks and assassins could not be located. They would go on to seek their revenge against Mortellan.
5 Mortellan ordered new castles to be built in Kro Terlep and Hesuel Ilshar. Ever restless for more power and prestige, the Archmage appointed his trusted commander Angus Ulrich as ruling lord of Ilshar and the Pomarj. Mortellan then returned to the Greyhawk domain where he and Valkaun Dain, started their greatest project, rebuilding Castle Greyhawk’s three great towers over the played out ruins of Zagig Yragerne’s dungeon. 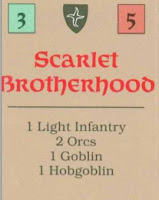 Yeah...I was still using the Greyhawk Wars rules when this war was played out. However, it was likely ran in the same game session as the Pomarj-Celene War (which ran concurrently with the Great Kingdom War of Succession) with Brian taking no break in his action. My narrative of course makes all of this seem more engaging than it really was.

My friend Brian (who has passed away so many years ago) was a character himself. His portrayal of Mortellan was flighty as he was in real life. He conquered the Pomarj because we were wrapped up in a war story line and it gave him something to do, but he really had designs on being top wizard in Greyhawk City. Cause screw the Circle of Eight. He was no friend of theirs. I always kept them above Mortellan like a yardstick to measure his power-level. If Mort wanted to be top archmage in Greyhawk that meant he would also need to top Zagig (and yes, he does eventually run for mayor). The point is, I kept pestering the players with assassins for what ever reason. They pretty much hated anyone in black leather or red robes by then. Whereas my friend Jayson's fighter Valkaun ended up marrying one of the assassins to get them to stop, Mortellan went for the jugular and decided to take over the Scarlet Brotherhood entirely. Yup, that's how we rolled back then.

Lord Angus Ulrich was Brian's other PC/NPC, one he used for jousting tourneys and stuff like that. Angus is who would watch over anything that Mortellan acquired. When he conquered "Ilshar" he put Angus in charge and moved on to his next project, rebuilding the three towers from Greyhawk Ruins (a story unto itself). Needless to say, once Brian had the Scarlet Brotherhood, he must've forgot all about the Pomarj (or just profited off the resources).

I am fairly certain the players never encountered the Father of Obedience. Sort of like how I never had them battle Rary the Traitor. He was a BBEG I'd tease, but to have them actually face the boss and beat him would demystify the entire organization. Well, so would destroying their hidden city. But I digress.

The Elder Cousin, head of all thieves in the Brotherhood (not named in the box set, not sure I used the Scarlet Brotherhood names) surrendered to Mortellan and lost in this narrative is that he is allowed to stay on to help rebuild Ilshar and attract its citizens back to the new order. This of course is a bad idea. But hey I was persuasive.

Tune in for the next installment, the Schnai and Aerdy Civil Wars. Will Mortellan finally get ahead? Sort of...See you then!