Cold Iron Avail You, Greyhawkers! This is the third and final installment of my old 1990's 2E war campaign based on the map and troop figures published in Iuz the Evil and the Marklands. If you haven't read Part 1 and Part 2 yet, catch up real quick, but hurry back because Furyondy is in big trouble right now. Iuz has broken through the Flare Line and has the capital of Chendl under siege... 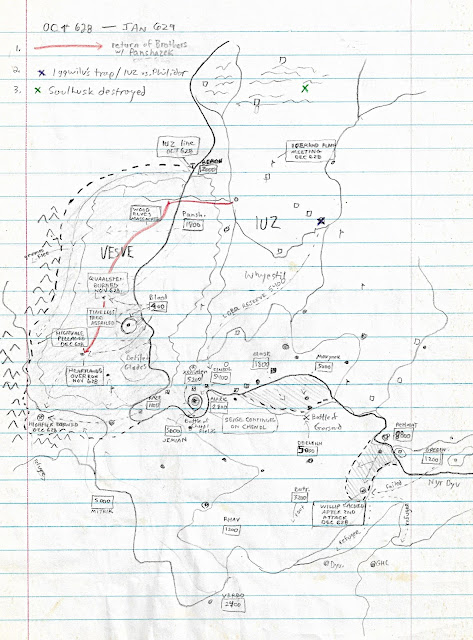 Comments: First off I apologize to all my reader who have stuck with me while I talk about my boring home game, because I have no data or narrative result for the end of this War. This is it. I'm going to keep digging, but I'm at a dead end. More on this in a bit while I cover some other tidbits.

What happened to Panshazek after he was captured? I don't recall. I guess he was interrogated then executed. Hard to say, but it didn't prevent Iuz from overruning the Vesve and wrecking Highfolk.
What was the significance of rescuing Riggby? I don't really remember this either. Was it symbolic? Was he going to help with the Crook of Rao to banish all the demons in the war? Did I at any point even do the Flight of Fiends? Was it a favor for Mordenkainen? Don't know, but Riggby is suggested as one of Iuz's targets in Iuz the Evil though so I must've ran with it.
How was Philidor betrayed? How was he captured? How was he even fooled? Does anyone care?
After I started writing up these war accounts I found one of my old DM notebooks, it says Graz'zt wanted Iggwilv and Iuz dead for trying to ally with Pazrael. This explains alot with the planar travel behind the scenes.
In these notes I also made General Sindol, who was also a cambion, the half-brother of Iuz, well really, a simulacrum invested with some of Iuz's power. I still like this idea.
Kermin Mind-Bender of the Boneheart turned traitor in this war after he was given information on the Soul Husk Caverns by Graz'zt, so Kermin in turn gave it to the PCs. The idea here was Kermin wants to make Sindol into the new Iuz. An alliance was made with Prince Lakaster in Aerdy who would run the east, Sindol the central Flanaess and Kermin the west. I don't think this exactly transpired in my campaign.
Critwall Bridge being fixed implies it must've been destroyed in the original Battle of Critwall from the Sargent-era storyline. If this happened maybe I did have a previous Flight of Fiends that soon was undone?
Icehand Plain is pretty cool, read about it. Philidor duked it out with Iuz, I assume Phil lost because he is never seen again. The PCs however are on a trajectory to end Iuz going after his Soul Gem and his Soul Husks. Do I have any notes on either of these? Nope, I looked. I don't keep my old game stuff as well as I thought I did.
The worst part of this exercise is not having the final reports on the Battle of Gorsend and the Battle of Chendl Fields. Gorsend had a result, I just didn't record the losses. Chendl Fields however, from the sounds of it was billed to be my version of the Battle of Pelennor Fields from Return of the King. I was (and still am) infautated with Tolkien back then and I especially loved the cartoon which features this battle. I have it on VHS. I have a vinyl record of the audio. This was the superbowl of fantasy war for me so I am positive this is where my campaign was headed. And yes kids, this was before the movies.
So again, I apologize for having ZERO results on how this war ends. Chendl Fields is clearly the climatic battle of the war given it's the last thing I put on paper. Furyondy turned the tide and Iuz is weakened. It had to end with Iuz on the run, or maybe wth Iuz falling and Sindol-Kermin suing for peace? If I ever find out I will finish this story I swear!

One last announcement, as I was digging for info on this Iuz-Furyondy War, I amazingly found more wars and battles I did prior to this war in my 2E campaign. They are all less data heavy and more on the narrative side though. So, yes I will be writing up more battle stories for you all in the future. Huzzah!

Thanks for reading. Until the Starbreak!