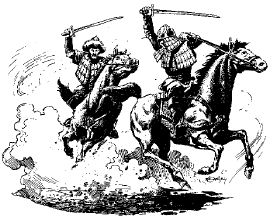 This in depth topic came to mind today. In a fantasy campaign world, be it the World of Greyhawk, Mystara, Dragonlance and so on, does it benefit having a war going on as a backdrop? In my experience it does even if the plot of your adventures never end up engaging in those conflicts directly.

Wars create a palpable tension in every location that heroes travel. Naturally the larger the war, the harder it becomes for characters to cross heavily defended boundaries on personal quests or to avoid being conscripted by one side or the other. Wars also create scarcity for goods, weapons and magic, which can affect PCs economically for good or ill. Furthermore, their best intentions, characters entering a warzone could be mistrusted by both good and evil rulers as spies or profiteers.

We all know Gygax built in many political hot spots in the Flanaess for the early publication history of Greyhawk, then in 2nd Edition those seeds were taken to their next logical steps with Greyhawk Wars/From The Ashes. By 3rd Edition and the Living Greyhawk Gazetteer many of those gains were undone and overall the Flanaess enjoyed a relative peace (Living Greyhawk Campaign developments notwithstanding). During those three or four timeline advances the face of the map changed politically, but adventure went on unabated. The wars between the Shield Lands and the forces of the Bandit Kingdoms or Iuz never deterred heroes from searching White Plume Mountain. Even though the Scarlet Brotherhood and the Great Kingdom were attacking every major port and city in sight, the unassuming Tomb of Horrors still lay nearby for anyone daring enough to travel there.

With things on edge once again at the end of published Greyhawk's time line, here is some potential new wars that could erupt if you want to have something epic going on in the background (or up front depending on your DM's mood):

The Rise of the Mahdi: Besides the crossroads land of Ket, not much has transpired west of the Yatil-Barriers range in many generations. The mysterious Mahdi of the Steppes has been rallying the faithful to his banner as foretold in the Prophecy of the Phoenix. Now that he has the nomads of the plains behind him, his sights are set on the civilized lands of Zeif, Tusmit and Ekbir.

Reunification Wars: Oeridians are a warlike culture and the fractured Great Kingdom of Aerdy is still a sore subject to many noble contenders from Ahlissa to the North Kingdom and even their cousins in Nyrond who can trace their lineages back to Aerdy's founding. Sooner or later these ambitious rulers are going to try and piece the puzzle back together and if it can be achieved, the center of power in the Flanaess could change dramatically.

The Great Jihad: Either the Mahdi of the Steppes, or a noble such as the Sultan of Zeif or Caliph of Ekbir has managed to unite the Baklunish states as their Padishah. The Bakluns' renewed zeal has led them to enter Ket and push back against the evil infidels to the east such as Furyondy-Veluna, Iuz and Keoland who have warred ceaselessly for centuries. It could also be a cultural grudge, the reborn Baklunish Empire seeking to avenge the ancient wars that brought their lands to ruin so long ago.

The Azure War: The major sea faring nations on the Azure Sea (Keoland, Sea Princes, Pomarj, Scarlet Brotherhood, Iron League and so forth, have become enflamed in unbridled naval actions over trade routes, resource acquisitions and unfinished past wars. Piracy further complicates the dangers of traveling by sea as they are hired by all sides to be privateers. No port is safe on the Azure.

The Real Greyhawk War: The Orcish Empire of the Pomarj, Rary's Bright Lands and possibly even a resurgent Temple of Elemental Evil could all spell trouble for the Domain of Greyhawk. With so many evil forces building on every side, could they possibly march on the Gem of the Flanaess itself? Such a siege could disrupt life throughout the central Flanaess and lead to a lot of intrigue within the city.

I always love having some kind of war happening in the background of a campaign--large or small it doesn't really matter. In addition to the economic issues it creates and the potential for adventures, it also helps to justify normal adventuring.

After all, why would this village need help defending against goblins? Should the militia or local lord be able to take care of it? If there's a war going on, then the Lord, his knights, and a good number of the trained young men in the village are away battling rebels or the infidel or what-have-you, and the only thing than can save the town is if a rag-tag group of strangers can put aside their differences!

Well said Todd! I had forgot that wars take away defense from towns. So true.

The tension can really mount if the players experience the golden era of peacetime first, only to be embroiled in a continent-wide conflict. They will see how things change, people's they have gotten to know perish, quaint lands they once knew ravished, etc.

That's what I liked so much about running the Blades of Corusk campaign years ago. Those adventures took the PC's right into that transition.

I'm glad you brought up the 5 Blades. I really felt that was going to usher in a new force in the flanaess, a united barbarian horde. It kind of fizzled after howl from the north.