Hello Greyhawk fanatics! Today marks my 750th post on Greyhawkery! Wow! So I've been blogging for two editions of D&D now and doing art for three. For this milestone post I'm going to display my finished color map of the Kester Environs that I drew during my art-stream on Twitch last week. This map shows the details of a single hex taken from the Darlene map (paper courtesy of Blackblade Publishing). Namely the town of Kester in Ull. If anyone is interested I have the original black and white file too. Also, hopefully next week I will have another art stream (still working out the bugs), just click my link and follow GreyhawkMike. Until then check out Kester's Environs.
Update 06/24/2021: Sorry folks. While my art stream was short lived, at least I put out this beauty in one session! Enjoy! 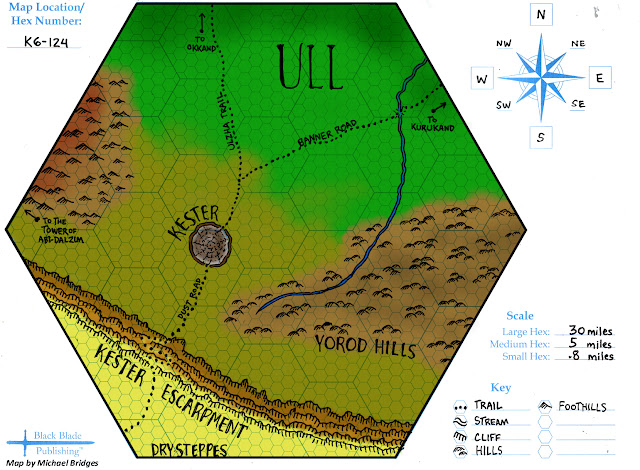 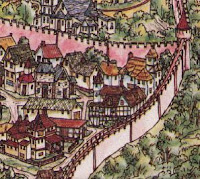 Welcome again Greyhawk fans. Today I'm taking a break from otherwise more important projects to discuss a random subject that came to mind while I was reading about the Free City of Greyhawk. In the lands of the Flanaess, Greyhawk is considered the largest single city in population. It's a hub of trade, knowledge, adventure and more given its central location on the map. For those reasons the World of Greyhawk setting bases everything around this city's point of view. Put simply we are supposed to consider Greyhawk as the most important city. But if it wasn't the largest city in population would that take away from the Gem of the Flanaess' grandeur?

In the United States, where D&D was originated, we consider New York City as the finest, most important metropolis in the world. That's our point of view here. It's certainly the most populous city in the US. But in the world? It's not top ten. It's not even top 20. It's not even the biggest on its own continent. Does any of this census stuff lessen the city's standing in the world to anyone? It is definitely more influential than over half the cities ahead of it. Let's look at the Flanaess' biggest cities and see if Greyhawk holds up in the population department.

Looks like having the biggest population does matter for the City of Greyhawk as it stays in first. The actual population of Rel Astra in the Guide is questionable, could be 63,000 making it 1st overall but since the LGG has it at 61k I believe the 39,800 is correct or is at least an attempt to clear up that confusion. Irongate and Dyvers are consistently top 5 as they should be. Both these cities could easily be alternative urbans centers for DMs tired of the same Greyhawk setting.

Dorakaa's inclusion in the Top 10 of the LGG is dubious since its only 10k in the 1983 Guide. Rauxes falls out of the list because it is blown up after the Greyhaw Wars. And lastly, why does nearly every major city in Greyhawk get a population boost by the authors of the LGG except Rel Mord which stays exactly the same? Ekbir got a huge population boost knocking the capital of Nyrond down the list. This is unfortunate because Rel Mord in many ways should be 2nd only to Greyhawk. At any rate, draw your own conclusions. For now, Greyhawk is and shall remain king.
Posted by Mike Bridges at 7:38 PM 2 comments: 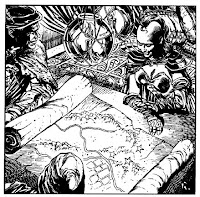 Good day Greyfriends! It's a slow week, but I am heartened by the uptick I've been seeing of Greyhawk community interest online. Whether its because of the token announcement of a Mordenkainen book I don't know, but hopefully the likes of Anna Meyer, Return to Greyhawk, Greyhawk Grognard, Greyhawk Reborn and various Facebook groups can keep pushing Wizard's buttons. For my own part, you know I have more projects than I can handle, so let's create some more. Here is some ideas for various Greyhawk themed maps I'd love to see or create myself:

Updated Resource Map. The small map in the 1980/1983 Greyhawk Guide showing regional resources of the Flanaess is one of my favorites. The LGG updated each nation's resources with new entries like livestock and ship building. A new map with this info is high on my list of DM utility maps.

Battle Maps. This one is also a long term dream of mine. We've all seen the Flanaess map that shows the migrations, but it would be just as interesting and informative to see the direction of various battles and wars. Just hearing about the Battle of Emridy Meadows, the Short War or the Hateful Wars is nice, but where do these forces originate and what direction do they advance or retreat? A simple themed map with arrows can teach players about the conflict faster than a long, boring treatise on the subject.

Ancient Flanaess Maps. Another handy map for history lessons on the fly. What did Eastern Oerik look like 500 years ago? 1000? and so on. I've meddled in making one before but the research of canon often shuts me down. A good example, someone once made an amazing series of maps showing the evolving size of the Great Kingdom of Aerdy. (map to the left) I need to find the link to this map. Also what DM wouldn't like to know what the Flanaess looked like when elves and dwarves held sway? Or ancient Flannae civilizations? There would even be geographical differences, like larger forests or cities that are now ruins. The applications for such maps are unlimited.

Update: Got a link to those historical maps here courtesy of Greyhawk Grognard (thanks Joseph).

Magic Aura Map. This one is extreme so bear with me. It would be daunting to research but fun to see all the magical sites (such as Tovag Baragu and other permanent gates) and ley lines (sites of druids, lost lands, wizards towers, etc) and lingering auras (Dry Steppes, Sea of Dust)  present in the Flanaess, all charted on the map somehow in levels of intensity. The utility is that wizards would know which areas to go or avoid in a general arcane knowledge sense.

Monster Hunting Maps. How about a reference map for common D&D monsters for PCs use in game? You could have areas marked where dragons or giants are found and what type. Heck you could even get create and tag owlbears, ogres or otyughs. Anything! Hand that out to hack n slash players and let them pick a destination. 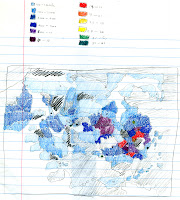 Population Density Map. This one I've done before with a color coded population density map of the Great Kingdom based on data from Ivid the Undying; unfortunately it was hand drawn and crude (see to the left). I'd love to see one of the entire Flanaess someday. This type of map is more informative and esoteric, something only a hardcore Greyhawk DM's could care about. However, such a map would be easy to show to players to tell them, yes you are traveling to a populated area or no you are heading into wilderness, without need of a history or politics lesson.

That's all I got for now. Anyone else have some crazy ideas for a Greyhawk themed map?
Posted by Mike Bridges at 9:51 PM 8 comments:

Watch Me Do Art on Twitch

Hey faithful Greyhawkers. I'm gonna try out something new: live streaming art and map making. I've been into Twitch lately (you may have seen my interview on the Green Dragon Inn) so I'm going to try and bridge some of my audience, namely streamers and Greyhawk fans. Be sure to check me out and follow. I'll most likely be tying alot of my Greyhawkery and Castle Greyhawk comic content into this channel with the added bonus that you can chat Greyhawk and stuff with me live! Hope to see you then, enjoy! 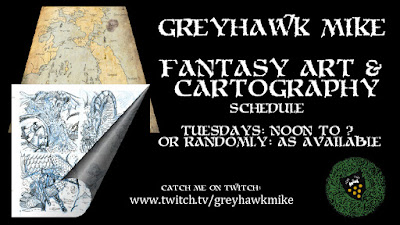 Update 06/24/2021: I'll leave this up here guys, but no I am not cut out for solo streams. Being on LordGosumba's Greyhawk channel doing Legends & Lore with Anna Meyer is plenty satisfying.
Posted by Mike Bridges at 12:37 PM 4 comments: 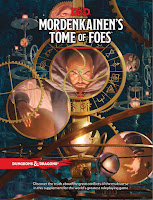 Good morning Greyhawkers! I had to get up extra early to talk about this breaking news already scorching across the internet: In May, D&D is releasing Mordenkainen's Tome of Foes. Following on the heels of the very good accessory, Xanathar's Guide to Everything, this book is surely going to be a hit with fans of 5E. From the product's blurb:

"Discover the truth about the great conflicts of the D&D multiverse in this supplement for the world’s greatest roleplaying game.

This tome is built on the writings of the renowned wizard from the world of Greyhawk, gathered over a lifetime of research and scholarship. In his travels to other realms and other planes of existence, he has made many friends, and has risked his life an equal number of times, to amass the knowledge contained herein. In addition to Mordenkainen’s musings on the endless wars of the multiverse, the book contains game statistics for dozens of monsters: new demons and devils, several varieties of elves and duergar, and a vast array of other creatures from throughout the planes of existence."

So let's get this out of the way, this is a multiverse book not a Greyhawk book. I highly doubt it has anything remotely to do with "foes" of Mordenkainen. We do know from 2E Mordy likes to study planar subjects though so I fully expect alot of old 2E era  Planescape, Blood War type stuff to appear in this. The elf and duergar race bit is probably the stuff they've already been playtesting via their Unearthed Arcana articles. They claim its not a Monster Manual, but it feels like one, or at least half-monster/ half-planar guide which wouldn't be bad. I would also hope there is some cool magic items. Can't go wrong there. So yes I'll buy this book and not just because the cover has Mordenkainen shilling for it (I never bought 4E Mordenkainen's Magnificent Emporium).

Not so idle thoughts beyond the book: what does this mean for the DMsGuild and content creators yearning for Greyhawk? Keep an eye on that site for next several months I guess. If I see Mike Mearls at Garycon in March though I'd be keen to ask if having Mordenkainen's name slapped on the cover makes him viable to use by DMsGuide rules? (not to mention this is his second 5E appearance, ahem) I've mused Tales From the Yawning Portal could be a loophole for Greyhawk creators due to the books content, so if not then, surely now with this book's cover? How much Greyhawk can they tease us with and still keep it buried? Let's hope Tome of Foes is a groundbreaking publication in more ways than one...
Posted by Mike Bridges at 5:03 AM 15 comments: