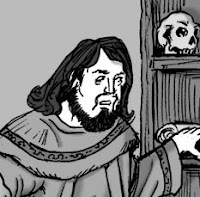 Posted by Mike Bridges at 8:52 PM No comments:

As I mentioned recently, I'm a bit late to the phenomenal novel Ready Player One. It's a small spoiler, but Greyhawk and the Tomb of Horrors features prominently in the story that is soon to be a movie in the next year I hear. As such, to sate my obsession I found an official site that has been posting photos and fan art. I thought my Greyhawk fans would love to see the old lich Acererak having some fun. Make what you will of the images. If you haven't read the book I highly highly recommend it.


Posted by Mike Bridges at 1:07 PM No comments:

A week or so ago I saw a link to LoreMaps and their wonderful interactive fantasy maps of Faerun and Game of Thrones. This project is a combination of geotags and linked wiki information, but trust me see it for yourself. It's only going to get more advanced as they go along with search functions and more. I for one am also going to contact them and obviously nominate the World of Greyhawk for their next fantasy map, cause why not?
Update 06/19/2021: It seems this site hasn't added any new maps since I last posted on this. Too bad.
Posted by Mike Bridges at 3:57 PM 1 comment: 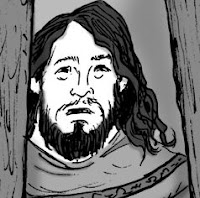 It's very interesting that Rary is a local wizard to this story in Greyhawk City. I don't know his Gygax campaign origins as well as Scott so I'm sure the precedence is there. I've only ever been familiar with the game setting version where he hails from the Baklunish West and somehow ends up in the Circle of Eight. It will be fun to see where Ehlissa's gambit takes her now that she's consulting a higher level mage (Higher than Tenser I assume). Stay tuned.
Posted by Mike Bridges at 7:32 PM No comments: 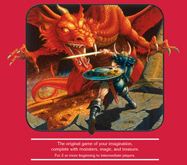 Let's talk nostalgia. For many of us who enjoy Greyhawk and D&D, we grew up in the 80's. For this reason I can be awfully sentimental when I read or listen to anything relating to that decade. I have a feeling the 80's is hitting a nostalgic high mark currently.

Who hasn't already read a blog post or new article about the popularity of the show Stranger Things? It touched on a lot of people's nostalgic heart strings and has inspired a new generation or two to go back and see what was so great about "back in the day". Building on this most recent development and working backward, we have long been in an 80's renaissance era with movie franchises like G.I. Joe and Transformers, not to mention innumerable cartoon remakes like Voltron. The list goes on and there is no way I can even touch on it all.

Back to gaming, WotC has been enjoying ever increasing popularity with 5E D&D largely, in my opinion, by catering to the nostalgic fun of older editions and material rather than trying to reinvent the wheel. This effort bleeds into the 90's of course since it concerns the Forgotten Realms, but Ed Greenwood's world does have roots farther back as we all know. With adventures based on Castle Ravenloft and notably Tiamat it would not surprise me one bit to see a remake of the 80's D&D Cartoon.

One last thing, for the last ten plus years, I've closely followed the goings on of D&D and Greyhawk. So imagine my surprise that I just now found out about the 2011 novel, Ready Player One because it has a VERY strong 80's nostalgic vibe. Not to give away the plot, but it references AD&D, Gygax, and Dragon Magazine quite liberally. It also specifically mentions and uses Greyhawk material in its plot more times than all of 4th edition! Author Ernest Cline has to be an old Greyhawk fan! As of writing this I haven't finished the book, but I hear Steven Spielberg the director of my favorite 80's movie of all time, Raiders of the Lost Ark, is making the movie version. Seems fitting.
Posted by Mike Bridges at 12:20 PM No comments: 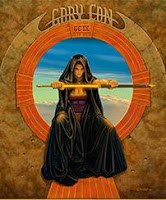 Hey guys, I would be remiss if I didn't point out my friends over at the new Trench Monkeys RPG Podcast recently interviewed the famous Luke Gygax and talked a bit with him about GaryCon, Greyhawk and old school D&D. You have got to check this out.
Posted by Mike Bridges at 12:12 AM No comments: