In Memory of Two Greyhawk Sages 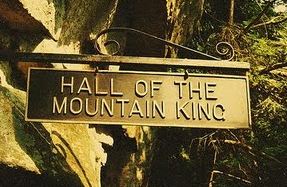 Welcome back readers of Greyhawkery. Yes, this is my 1002nd post overall, and my second since going on hiatus last year. If you are new to the blog, well, thank you for joining in. You have a lot to catch up on! If you are reading this as it's posted, thank you for keeping on top of my activity in the Greyhawk community. I haven't gone anywhere, and I appreciate those who encourage me to get back to blogging.

This post is special however, so no promises. As many in the Greyhawk community know, we lost two friends over December 2021. It took me a while to process the loss, to decide if I wanted to blog about them, or leave it at sharing kind words on Legends & Lore stream. Well folks, I'm finally in the frame of mind to do a post.

Michael, or Leahcim the Learned, was a kind soul, witty and quick with a bit of Greyhawk lore. Michael was a fixture in the Greyhawk community and on streams. I remember first meeting him through the Greyhawk Channel, as he was quick to educate the new players in Greyhawk lore through the chat window, and later he got involved through Lord Gosumba channel and the community Discords. I was lucky enough to play some Greyhawk with Michael before he died, and I could tell he relished every session playing a Suel wizard. Michael was also a contributor to Canonfire, Oerth Journal, and I'm sure more if only he had more time. I wish I had got to know more about the man behind Leahcim, maybe at a convention, or guesting on a stream. Now he'll just have to remain a legend, along with the pantheon of other learned Greyhawk deities.

Jason Zavoda by contrast, needed no introduction in our community. Or if you didn't know him, one only had to point out his body of Greyhawk work. If I was to sum Jason up in on word I'd say "prolific". He is first and foremost known for his Zavoda Index a tool that has no equal in the D&D community. There is no one writing in fandom who hasn't used his index for reference. If that was all JZ did, he'd still be a legend to me. But no, he also started a blog Hall of the Mountain King which in his words, was inspired by Greyhawkery. That's an honor. Of course, Jason grew tired of Blogger. Yeah it's not the best, I agree. Well, he moved his posts to Canonfire Journal: Hall of the Mountain King where Jason had already been a long-time member of Canonfire. In fact, Jason used to post Greyhawk fiction there such as Nosnra's Saga

Speaking of fiction, I don't know anyone who loved Gary Gygax's Gord novels more than Jason Zavoda. Anytime Jason would guest on Legends & Lore or Gabbin' streams, he was ready to dispense sagely lore about these books. His love of these novels led him to another innovative idea: Jason Zavoda Presents: Reading and Annotating the Gord Novels, with Chris (Cthaeh). Audio readings of Greyhawk novels (or any D&D book for that matter), is an incredible idea, and with annotations makes it even more fun to experience. I hope Chris and someone else can take up where Jason left off and finish this project. And I think that's what drove Jason to be so prolific. We all knew his health wasn't the best (nor was Michael's) and he was posting blogs, reading books, and talking in streams and voice chats daily. He knew his time was limited and was making the most of it. Now, Jason can kick back and have a drink with Gygax, Arneson, and all the other legends of the game.

Let these two guys be your motivation to contribute your fan work with the Greyhawk community (or any D&D community). You may start small, but if you are consistent and your body of work grows, people will be inspired by you in turn, and that's a fitting reward for being a part of this community.