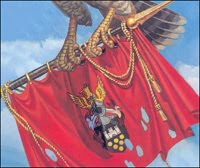 Hello Greyhawkers! It's been a decent year for Greyhawkery. This has been my highest post count in about three years. I credit the Greyhawk community for giving me plenty to talk about, because it has never been stronger. Here is a couple cool links to some Greyhawk-related stuff you have to check out. Enjoy!

My good friend and professional cartographer, Anna Meyer is mentioned on a YouTube video, "9 Cartographers You Should Be Following" by WASD20. I'm proud anytime Anna gets recognition around the internet. I cannot wait till we start up our next Legends & Lore show in 2020.

Second is an astounding series of articles about "Mythic Greyhawk" on the blog Mythlands of Erce by Anders H. While not a dedicated Greyhawk blog like my own, Anders' latest article is a VERY interesting and new take on the background and nature of the demi-god Iuz the Evil. I highly recommend you read this blog and consider his ideas for your own campaign. I am looking forward to more from Anders.

Posted by Mike Bridges at 9:04 PM No comments:

Happy Needfest Greyhawk fans! Well today I'm in a slightly artistic mood so I did one of my hastily drawn maps of a portion of the Flanaess. This time I had a special idea in mind though. The map before you is based on the Principality of Ulek region of Jay "Lord Gosumba" Scott's long-running campaign that you can find weekly on Twitch. I don't know much about the Free City of Altimira or which other parts are Jay's creation (I like the heraldry!), but with the assistance of Anna Meyer's 598 CY map update of Jay's campaign I was able to combine their work with that of Darlene into my own sketchy style. Enjoy and Happy Holidays! 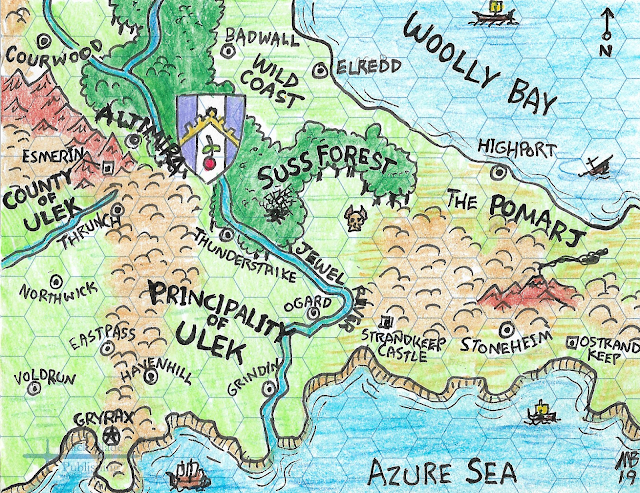 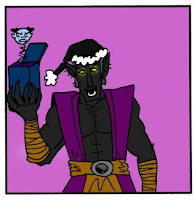 HAPPY NEEDFEST GREYHAWKERS! Back in the day when I did a weekly Greyhawk comic strip, my year always ended with a blowout special during the Christmas (Needfest) season. Many of you will remember my timeless classics, A Needfest Story or How the Gruumsh Stole Needfest. As I don't make these anymore (I ran out of material I think), the next best thing is to show them off again to a hopefully new audience of D&D and Greyhawk enthusiasts. So let the good times roll. Enjoy, this classic Needfest Musical Extravaganza from the misty memory of 2011!
Posted by Mike Bridges at 9:49 PM 2 comments:

Greetings Greyhawk maniacs! Needfest is fast approaching and I don't have much new to show you, but I can muse about a strange thing I notice about the Flanaess map. If you've been familiar with Greyhawk and the community as long as me, you'll know the celebrated Darlene map, with all its artistic flair, has some dubious geographical features if applied to real life. In my youth I didn't care about that stuff, but now decades later my brain has ran over the map millions of times and I can't unsee the fact that Greyhawk-Duchy of Urnst is an island. 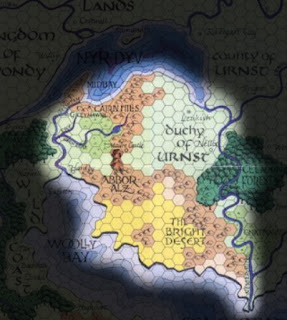 Look it at! The Nyr Dyv and Midbay area is the north coast, the meandering Nesser River is the east coast, the Woolly Bay is the south-south west coast and the short Selintan River is the west coast. This island encompasses the "port city" of Greyhawk, the Duchy of Urnst and the Bright Desert/BrightLands. I hope someone can explain me wrong about this, because without researching it, I'm sure there can't be a real life instance of an island bordering a lake, a sea and one or more rivers at the same time. Fantasy maps, gotta love them.

Running with this island idea though, it's fun how the geopolitical nature of this area is unchanged for the most part. Greyhawk seems more like a low land swampy domain nestled in its NW portion shielded by a range of highlands that runs the length of the islands from the Cairn Hill through the mountainous Abbor Alz middle that encircles the desert third. The Duchy is largely plain of course save a section of highland Celadon Forest. The Bright Desert (formerly Sulm) with the Brass Hills in the center is likely the highest elevation on average in this hypothetical island. Those southern cliffs don't seem to sport any ports unlike the bustling port of Hardby up the coast.

My brain tells me that the east and west river segments ruins the islands premise, but if you consider two swamps, the Mistmarsh and Gnatmarsh border these river systems, then one well placed flood can make this island even more noticeable! Crazy Zendrelda the fortune teller may be onto something. At any rate, the point of this island is, when you've played with the same fantasy map for nearly 40 years, its fun to sometimes turn things on a head and see what new you can do with it. Comment, refute and enjoy!
Posted by Mike Bridges at 7:16 PM 4 comments:

Hey Greyhawkers! Today I'm boosting the signal for Greyhawk Online as they preview the upcoming winter issue of the Oerth Journal:

PREVIEW OF OJ#31!! "FACTIONS" of the Flanaess!! Here's a look at some of the articles coming later THIS MONTH!! For you authors, there's still a *little* time left to write and submit an article on an organization in the Flanaess, either already known or homemade!

Be sure to keep an eye out for this new publication to be released in the coming weeks. Enjoy!

Posted by Mike Bridges at 11:44 AM No comments:

Hello fellow Greyhawk fans! Today I'm giving an early preview of some Greyhawk events that will be available at GaryCon XII on March 26-29 at Lake Geneva, WI. Note, that registration for all events and games does not begin until February, but keep an eye out because they sell out fast. As for Greyhawk related events be sure to sign up for these four seminars:

Fantasy Cartography with Anna B. Meyer (Friday at 10 am)
This seminar is hosted by Anna Meyer, professional fantasy cartographer and co-host of Legends & Lore. Anna's Greyhawk Atlas is world renowned and in this seminar she will share her experience and answer questions on making maps.

Greyhawk Online: Creating & Sharing in the World of Greyhawk (Friday 1 pm)
This seminar is put on by W. Kristoph Nolen. It showcases the fansite Greyhawk Online, ezine Oerth Journal and wiki The Great Library of Greyhawk. All attendees get a printed copy of the OJ magazine!

Celebrating Greyhawk: A Fandom Renaissance (Friday at 3 pm)
This seminar is the second annual celebration of Greyhawk hosted by fans (including myself) who have been integral in sharing content and organizing the community. Be sure to come hang out and share stories, ask questions and see what news is happening in the Greyhawk community.

DMs Roundtable-Streaming and Technology in D&D (Saturday at 10 am)
This seminar is paneled by experienced game streamers Jay Scott (Lord Gosumba channel), James Duffie, Frank Schumacher and Carlos Lising. They will cover the ins and outs of streaming and RPGs.

If you plan on attending Gary Con be sure to at least track one or more of these events or possibly sign up for one of their convention games (times to be determined). We love to meet other Greyhawk fans so don't be shy, stop in and join in the celebration.
Update 06/27/2021: Alas, the COVID pandemic cancelled this event. I really was looking forward to meeting Jay Scott, and all my Greyhawk panel friends from the previous year. Maybe in 2022...
Posted by Mike Bridges at 1:10 PM No comments: