Howdy Greymavens. It's a light news week for me so I thought I might spotlight a couple articles currently on the front page of Greyhawk fan site, Canonfire!

First up is an original nation by author Sutemi. The Kingdom of Qinlo is an island realm in the Sea of Sharks off the east coast of Hepmonaland. Sutemi writes:

"East from Hepmonaland lie the islands of a powerful Touv civilization called the Kingdom of Qinlo. Magic, mystery, gladiators, sea monsters, jungle druids, doppelgangers... This and much more awaits for you in this African-themed lost world."

Check out this article if you're looking for an exotic tropical land to send your characters.

Next up is a new map by frequent contributor Wolfsire. His Rockburg-on-the-Marsh map details a location in the southwest of Greyhawk seen in the obscure module Gargoyle. Check out and download this town for use with Gargoyle or any campaign location if need be.

Last but not least is the triumphant return of long time author, Grodog to the front page of Canonfire! His Excerpts of the Demonomicon of Iggwilv series are among the most read features on the site. This time around Grodog brings to us some demonic lore, appropriately about Gresil, the Demon Lord of Demonic Lore. This diabolical article also includes stats on Gresil's librarian servants, the Stagrynax. Be sure to check out this addition to the outer planar pantheon of evil. Be warned: Grodog has more in store.

That's all for now.

Posted by Mike Bridges at 3:03 AM No comments: 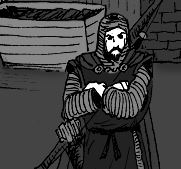 Well met Greyhawkers! It's high time I remind everyone to check out page five in the second chapter of our ongoing Castle Greyhawk graphic novel. Follow the link above to read some important literary extras by author Scott Casper. Alternatively you can view the first page HERE, courtesy of Maldin's Greyhawk.

Artist's Commentary: This page took a bit longer to get out than I expected due to Gencon, but it was well worth it. I drew the first panel twice from two distances and the fifth and sixth panels took multiple tries. Sometimes it's hard to get the perfect angle or expression. Practice makes perfect though. If you're wondering about the guy following Robilar and haven't read all the exposition yet, yes he is an homage to Conan so you know that's gonna mean trouble.
Posted by Mike Bridges at 7:43 PM No comments:

Ull, Ekbir and the Finish Line 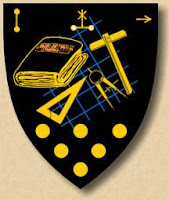 Anna Meyer has been working feverishly toward the end goal of her massive World of Greyhawk atlas. With the Dry Steppes nearly behind her she now has posted previews of my beloved land of Ull and Ekbir! It's been a personal joy to see Anna map Ull not once but twice. The first time was for my Oerth Journal #19 gazetteer back in 2006.

That map was pretty sweet but since then she has logged hundreds of hours in the Flanaess honing her skill at mapping. The results this time around are staggeringly beautiful. I'm especially happy to see the Ulakand mesa worked into the terrain. There is so many little nuances in this map that I'm rather excited to see what more I can place in this small corner of the world. So yeah, it's a rare honor for Anna to yet again, use my exhaustively developed (yet barely canonical) work on Ull for her atlas. Enough gushing about Ull though...

Now Anna can see the finish line of her cartographic marathon run. This newest preview map shows that she has rendered almost the entirety of the Flanaess at last. All that is left is minor tweaks and revisions, easy stuff for her. I applaud Anna's tireless efforts over the years and I look forward to seeing what more Greyhawk she has in store.
Update 05/23/2021: Updated broken links due to changing websites and downloads.
Posted by Mike Bridges at 12:37 AM 1 comment:

Crosslinked from the Canonfire Crier blog, here is a summary of some items from Gencon 2013 that may be of interest to the Greyhawk community. Enjoy!

Posted by Mike Bridges at 4:04 PM No comments: 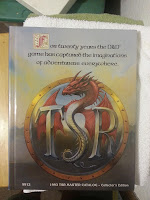 Howdy folks. It's the day before Gencon and I have nothing new yet to report, so let's get nostalgic instead. A couple weeks ago a friend of mine found this gem and didn't want it. It's a near mint copy of the "Collector's Edition" of the 1993 TSR product catalog. This book is quite amazing. Not only is it a hardback, glossy paged catalog (wow), it's from the heyday of D&D during second edition when TSR was pumping out so many games and product lines it will make your head spin.

For example, Forgotten Realms, Greyhawk and Dragonlance are at their height of course, but here we also have Al Qadim (this was the year it got official stuck to Faerun), Dark Sun, Ravenloft and Spelljammer still going strong. There was also the regular Dungeons & Dragons line that had your Mystara products such as Champions of Mystara boxed set (building off the famous "Princess Ark" Dragon Mag articles). 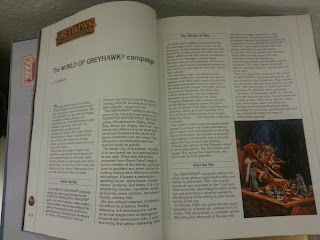 Not only was 1993 good for those D&D mainstays, TSR was showing off new material for the Buck Rogers High Adventure RPG, Gamma World and many board games like Dragon Quest. 93 saw the release of some notable books, supplements and adventures for D&D like the Book of Artifacts, City of Lankhmar, the Complete Gnome and Halfling Handbook and Dragon Mountain (wink).

What was Greyhawk debuting in 1993? It was the follow-up to the Greyhawk Wars so we saw some of Carl Sargent's most prolific works rolled out: 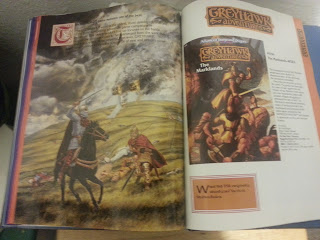 WGR4 The Marklands: "The foundations of the Greyhawk world have been shaken by disastrous wars. In the aftermath, the adventure intensifies!
Once the pre-eminent power of the north, Furyondy has been bled by years of war against the evil empire of Iuz. Borders once secure are now wastelands, dotted with isolated villages, struggling to withstand the tide of evil. The Marklands sourcebook combines years of background with new excitement and presents all the information needed for the Dungeon Master and players to adventure on this war-stricken frontier."

(A succinct blurb, it of course didn't have room to mention that the book also details Nyrond and the Vesve Forest)

WGR5 Iuz the Evil: "Iuz's empire of conquest and evil is detailed for the first time!
Surrounded by his fiendish minions, Iuz the Old, Iuz the Evil, has emerged as the greatest threat to the good lands in the World of Greyhawk campaign setting. This sourcebook provides complete information on Iuz's lands, his fiendish armies and the horrid dungeons beneath Dorakaa. Only the bravest adventurers would dare infiltrate Iuz's blood-red empire."

(I wouldn't say WGR5 details any dungeons below Dorakaa, that is what this next one was for) 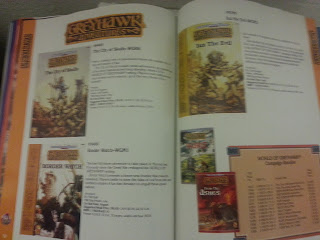 WGR6 The City of Skulls "Here, a daring crew of adventurers braves the capital city of the evil empire of Iuz!
The City of Skulls module sends adventurers up against one of the most diabolical and long-standing villains of the World of Greyhawk setting. Players must infiltrate the city on their secret mission, up to the very throne of Iuz himself!"

(I don't recall the module playing out that way, but hey it sounds impressive)

WGM1 Border Watch "The first full-blown adventure to take place in Nyrond and Furyondy since the Great War reshaped the World of Greyhawk setting.
Border Watch presents a brave new frontier that must be mastered. Players battle to stem the tides of evil from the vast northern empire of Iuz that threaten to engulf these good nations."

(As I recall this mod was only set in Furyondy. Not sure. The modules that followed Greyhawk Wars fell flat in my opinion and I imagine probably led to the greatest travesty in Greyhawk history, worse than the joke Castle Greyhawk - Ivid the Undying not getting published.)

All in all this was a fun book to thumb through and read. Now I'm off to Gencon to find out what the future holds for D&D. Stay tuned! 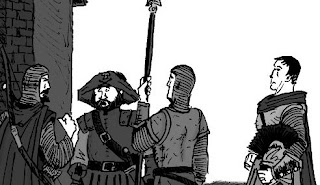 Hola Greyhawkers! Gencon is fast approaching, so I better get in a plug for page four of the second chapter of the Castle Greyhawk graphic novel. Follow the link above to read more exposition from our relentless author Scott Casper. Alternatively you can view the first page HERE, courtesy of Maldin's Greyhawk.

Artist's Commentary: This page was quite fun to put together. Scott is populating the story with some cool characters and quirky homages. It goes without saying by now that the bandits are a mixed bag of styles in armor and armament. I can't wait to see how this plays out.
Posted by Mike Bridges at 8:36 PM 2 comments:

It's always a good week for the Greyhawk community when an article comes out on the setting, but when a Greyhawk ezine is made, that's a huge event! Following in the foot steps of the venerable Oerth Journal comes Canonfire! Chronicles. This collection of hawkcentric adventures promises to be the Dungeon to OJ's Dragon Magazine. The staff of CC (who will also be the force behind future Oerth Journals as well) is a cast of capable authors and artists from of course, the fansite Canonfire! (where I hang my own hat). To aid in the promotion of their very first issue, there is also a new blog dedicated to both publications.

Congrats to all involved in this project and those to come. Now go and download this issue and enjoy!
05/23/2021: The download link to this issue is broken and removed. Go to Canonfire at the link above and inquire about CC if you're interested in a download of the project.
Posted by Mike Bridges at 2:25 AM 1 comment: