Heya Greyhawk fiends! Quick shout out and signal boost for my friend Carlos Lising as tonight he hosts a stream discussion about IGGWILV the Witch Queen of Perrenland on Twitch with fellow Greyhawk luminary Allan Grohe on caslTawk. I won't be there due to previous gaming obligations, but if you are into Greyhawk, Demon Princes, Demonomicons or hell anything AD&D be sure to tune in, hang out and say hi to these two old school aficionados. Enjoy! 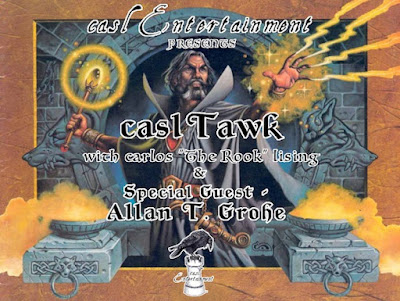 Update: Here's a video replay of the discussion for those who missed out like me.

Hail fellow fans of Greyhawk! Just a quick shout out this week because it's the start of Fall (is it Brewfest yet?) and that means a new slate of shows and times on the Greyhawk Channel seen on Twitch. Now some of these groups have already started weeks ago (while Legends & Lore took a hiatus), but as usual for the folks who run games on the GHC, there is always bound to be a game going on a day you are free. So stop in, say hi, follow the channel and hang out for a spell. In fact, you may learn something about the Greyhawk setting along the way! Enjoy! 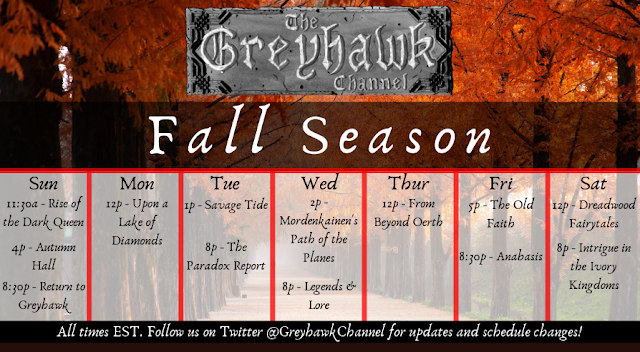 Posted by Mike Bridges at 2:51 PM No comments: 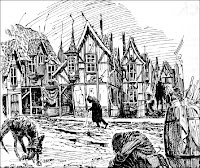 Hey Greyhawkers! The cross-over stream with Jay Scott, Anna Meyer and myself on Lord Gosumba Channel was great fun. One good thing that came out of it that I need to pass on is the original adventure downloads available at Canonfire. I often forget that Canonfire was much busier back in the day and was more than a forum and occasional postfest. Jay mentioned a module set in Greyhawk's run-down part of Old City whose title is CGA1 - Case of the Meazels by Brian Dougherty. This adventure is found in the Download section of Canonfire. Go check out Case of the Meazels and much more. What's old is new!
Posted by Mike Bridges at 1:19 PM No comments:

Howdy Greyhawkers. Anyone who follows me and Anna Meyer on our Twitch Greyhawk show, Legends & Lore will know we are on hiatus, but next week we are going to be on Lord Gosumba Channel for a cross-over episode. Check us out next Monday at the times listed below! Bring your City of Greyhawk questions!
Update 06/25/2021: Spoiler, Anna and me end up going on Lord Gosumba's channel a lot more. 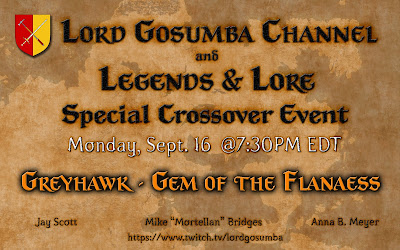 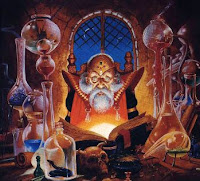 Howdy Greyhawkers, it's been a lazy week for this guy and with Legends & Lore on hiatus till the Fall, I need to get back into writing some content for you fans. Speaking of the Greyhawk Channel, they have another big line up of new live games scheduled for Fall. Starting times will vary of course and I will try to promote them soon.

So as  was perusing my game shelf for something topical, I pulled down my old AD&D Unearthed Arcana. For anyone who has never owned this book, it was sort of a follow up on both the Players Handbook and Dungeon Masters Guide. It has never classes, spells, deities, rules and most interestingly to me, new magic items! D&D has tried to replicate the feel of this book in later editions either in print or in digital articles, but in my opinion, nothing is like the original UA. That's why I'm sad I didn't utilize it more often back in the day. Today I'm going to feature some Greyhawk themed magic items from this book that need an update (5E or otherwise). Enjoy...

Zagyg's Flowing Flagon: There are plenty of items in UA that have kept up with the times like the Quiver of Ehlonna and Hewards Handy Haversack. This is one I don't think got an update. It's a well-made silver wine container with a toast etched on its side. Whenever it is read the flagon fills with a potent potable. Each time the magic is used to refill, the alcohol content gets stronger. A good item to give players to create a rowdy, drunk game night. Probably an uncommon item.

Ring of Boccob: This fancy ring does not radiate magic, and indeed any magic item that strikes the wearer of Boccob's Ring has to make a save or become nonmagical! Basically Mordenkainen's Disjunction by touch? This would be a mean item to give to a villain. I'll say its a rare item.

Wand of Force: This would have to be very rare. It's a wand that has a few functions, One creates a 4' long blue-white energy blade to appear equal to a sword +5! It's a freaking light saber! Second, it can create Wall of Force. No-brainer there. The third creates other planes of force. What's neat about this wand? It drains other force spells, like Bigby's Forceful Hand or Mordenkainen's Sword to recharge it. It's awful specific in its applications, but cool sounding. 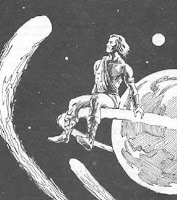 Mantle of Celestian: Black clothing that's main function is protect from the cold of outer space. (Like we all were doing that in AD&D back in the day?) The Mantle also provides food, drink and storage pockets. Bonus, if you are a cleric of Celestian (rare enough) then you can also see people's auras. More like an Insight check rather than detecting alignment though. I'd say this one is in the very rare category if made in 5E.

Shoes of Fharlanghn: Magic shoes that never wear out and cause the wearer to never fatigue when walking. Suitable for the god of travel. Furthermore for neutral/neutral good types the shoes make the wearer more sure-footed in hazardous or trapped conditions. Like above, if the person "attuned" is a worshipper of Fharlanghn then you can never get lost or surprised. You gain jumping and movement increases, and climbing/balancing is significant easier. Very rare again!

That's all. After having mused over these items, it makes me want to create some original items based off other Greyhawk gods or notable NPCs. You know something like Nystuls' Magical Net or Hextor's Hellish Halberd or Telchur's Fur Vest. Run with that if you want. Until next time...
Update 06/25/2021: Updated link to YouTube archive. L&L has moved on to LordGosumba channel.