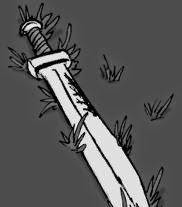 Welcome back Greyfolk! As usual I'm a week behind in promoting our latest, page twenty-seven in the second chapter of our ongoing Castle Greyhawk graphic novel. Follow the links above to get more descriptive discourse from freelancer Scott Casper. Alternatively you can view the pages HERE, courtesy of Maldin's Greyhawk.

Artist's Commentary: The tension is ratcheted up a notch as Drake tangles with Terik and Robilar up close and personal. Tenser meanwhile has to think fast or Gronan will surely cleave him in half.
This page was a challenge by Scott, several smaller panes showing frantic action. After my initial hesitation and some re-reading it all flowed quite nicely. Stay tuned for the next installment!
Posted by Mike Bridges at 3:54 PM No comments:

Article: What is The World of Greyhawk? 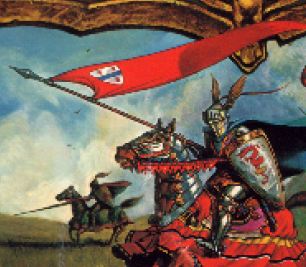 I nearly missed this bit of Greyhawk nostalgia from a few days ago. Over at The Cred Bureau, Brian Patterson (artist behind the webcomic d20 Monkey) wrote a short guest piece titled What is The World of Greyhawk?

Brian, who is a major Greyhawk fan, serves up a charming tale of Greyhawk's formation and it's core concepts; arguing the case why you should play in this setting. It's a rather good, humorous read worth checking out.
Posted by Mike Bridges at 11:35 PM 1 comment:

I was looking back through my six years of weekly Greyhawk themed comics today. It's been almost three years since I did the old World of Greyhawk Comic and many of the early ones were pretty corny I admit, but as they went on my subject matter got more sophisticated as well as my methods of delivering the comic (even if the punch lines remained corny).

This one from July 2010 I am particularly proud of for this reason. After you read it, be sure to click on the link at the bottom of the comic page for the special 3D version. Enjoy! ;)
Posted by Mike Bridges at 12:39 AM 1 comment:

Welcome back Greyhawk fans! Yikes! I'm way behind on promoting the latest, page twenty-six in the second chapter of our ongoing Castle Greyhawk graphic novel. Follow the links above to get more dynamic dialogue from fictionist Scott Casper. Alternatively you can view the pages HERE, courtesy of Maldin's Greyhawk.

Artist's Commentary: When's the last time you saw a wizard take on a fighter in a blade to blade duel? Yeah not often I wager. Tenser is a martial mage though, perhaps he always yearned to be a fighter. Tenser is also apparently not afraid to play dirty. Those spell components really come in handy!
Poor Captain Drake has been through a lot in this chapter what with being tricked, his fort looted and burned and with him inside it. And now Drake's ire is so great not even the combined steel of Rob and Terik will stop him. We shall see...
Posted by Mike Bridges at 11:51 PM 1 comment: 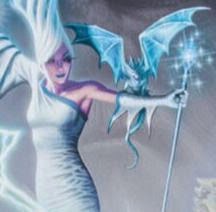 Just when I think Gygax Magazine (quarterly) has been too quiet, I see that issue #4 will feature a new cover done by my all-time favorite Dragon Magazine cover artist, Den Beauvais.

Beauvais has done illustrations for many games, books and cards over the years. I particularly like his cover for DA2: Temple of the Frog. In Gygax Magazine, he yet again revisits his famous chess board theme: 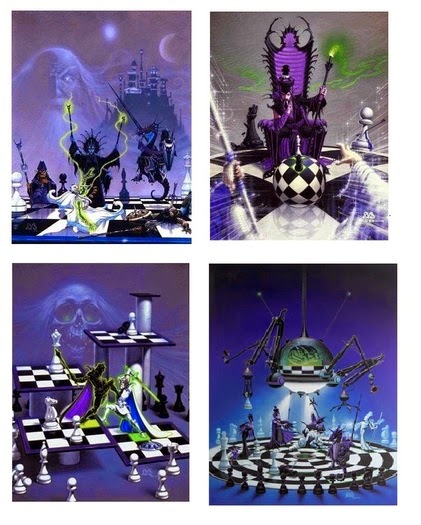 I for one can't wait for this issue to come in the mail. I feel like I'm back in school again. I'm not sure when the issue will be available, but I am sure by the time Gencon rolls around in August it'll be ready for the public. It'd be fantastic if Mr. Beauvais could be there in artist row as well.

Update 6/12/2014: I missed a press release by GM from a couple days ago concerning their delayed issue. Evidently subscribers are supposed to get an email to a free PDF download. I haven't got mine so far. Hrm.

Over at Wizards they have posted part two of Shannon Appelcline's retrospective history of D&D when it comes to creating cultures and settings. You can read part one HERE. Beyond Feudalism: Innovative Settings covers a dazzling array of settings from the late 80's up till 2000. Among them he mentions From the Ashes' place in this era:

"From the Ashes (1992) offered a new take on the Greyhawk setting. It was still a feudal, medieval world, but like so many of the settings of the 2nd Edition era, it adopted one of the genres that TSR had played with in the 1970s and ’80s; Greyhawk was now a world of dark fantasy, where evil had advanced to become a dominant force. Unfortunately the change wasn’t enough to save the old setting. After a short run (1992–1993), From the Ashes was retired; when Greyhawk returned it would once more be a gonzo Medieval world."

That's an apt description of things I guess. Strangely after reading this I realized that I never talk much with friends and other gamers about FtA being a dark fantasy theme. It felt like a timeline advance to me, but not really any darker. Was Greyhawk trying to imitate the utterly dark Warhammer setting (which given the writer I could believe)? We all knew the Wars advanced things in evil's favor, but the changes were so temporary or tenuous that those DMs who concentrated on just adventures could easily ignore FtA altogether, so that by the time 2000 and the Living Greyhawk Campaign came along things were rolled back to a degree of how they were in Gygax's era. Gonzo though? I hardly think 21st century Greyhawk compares to the Greyhawk of Gygax's day. I'd love to hear others' assessment of Greyhawk's dark fantasy turn.

So Many Projects So Little Time

This is usually a New Years resolution type topic, but sitting here thinking of a topic during an otherwise slow day I realize now there's so much about Greyhawk that I want to do and there's so little time in the day, week, month, etc. Here's a run down of a few projects that I have going on or have put on the back burner.

Castle Greyhawk: Scott Casper and I have been diligently working on this for nearly two years and we've done near sixty pages of graphic novel goodness. This project is no problem except I wish I could increase my output. However what the real sub-project is, I do want to make a full PDF compilation of chapter one and eventually two.  Degree of difficulty: 4/10.

Canonfire Articles: Canonfire article writers are few and far between. We don't often actively search for Greyhawk fans, though new ones join the site regularly. The barrier I see is the longevity of the site has caused most of the juicy topics to have been done long ago. It takes dedication and imagination to find a niche to write about, so if you're one of those individuals, check out Canonfire and share your own Greyhawk material.
For my own effort, I write on Greyhawkery so much that I no longer think of applying the same content to the site that I got started on. I could easily cross post things like Mysterious Places From the Fringes or any of my serialized Sea Princes campaign posts. This one should be easy, I just need to apply myself. Degree of difficulty: 2/10.

Speaking of Canonfire articles, I have the most wonderful and laborious series in mind titled Battles of the Flanaess. I've talked about it on this blog more than a few times, it's a long series of military histories of canonical battles. There is TONS of them. I have researched a few major battles but there is a lot going on with these beyond just writing them up. This is on the back burner but right now - it's way in the back. Degree of difficulty 9/10.

More on articles, I have a completed Ulakand Gazetteer that I direly need to put out there for every one to see. Originally intended for Oerth Journal, I still need a map for this one to be suitably finished. Some day I'd like to pair it with a Kester gaz and hell maybe a write up of all Ull's villages. I could throw them on a PDF while I'm busy doing the Castle Greyhawk graphic novel compilation. Degree of difficulty: 7/10.

Greyhawk campaigns: Of course I actively run Greyhawk and when I do I usually write my own stuff or adapt published stuff to fit. When I run Greyhawk I also tend to add a lot of extras. Before my last campaign, the Mines of Hokar went on hiatus I made locals maps of Hokar town, the Suss Forest and numerous other hand outs like wanted posters. Before that I did things like the South Seas Map. When one of my three Sea Princes campaigns revives I'll easily be sidetracked from the previous entries by these more immediate DM projects. Degree of difficulty: 4/10.

Concerning the overall south seas setting, I have a long range plan to do a campaign guide of sorts on the various power groups and ports I've used, both canon and original (such as the Fivefold Council). I'm know there's a lot fan written stuff on the Sea Princes already, but how about the Lordship of the Isles or the Olman Isles? Someone get on that. Degree of difficulty: 7/10.

So yeah, all this seems like a lot, but it's actually possible to do. Prioritizing is the key. So is self promotion. If I talk about starting a project, and I'm always looking for new ones...most of the time I will finish it. Stay tuned!
.
Posted by Mike Bridges at 3:16 PM 2 comments: