Howl From the South: Banquets and Bandits 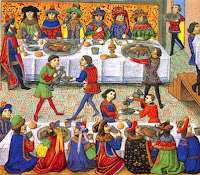 Welcome home fans of Greyhawk, today is the fourteenth installment of my ongoing 5E Hold of Sea Princes reboot of the 2E modules Five Shall Be One and Howl From the North, set in the south seas. What sort of high adventure will the crew of the Envy get into this week? Note, don't worry about spoilers, we've gone so far off script from the original adventure that any resemblance to the module HFtN is fleeting.

When last we saw the crew they were presently ready to go to Prince Varek IV's birthday banquet at his palatial home in Port Toli. Cullen wanted to impress upon the self-appointed nobility of the city so he made a run of the town's finest clothing imports and bath houses. Though pricey the killer-captain looked like a completely different man afterward. Most of the rest had decided to come as they were such as Tyrrus and Lash. Ostyn and Kuma felt uneasy about attending a high society function so they decided to drive the others in a carriage (borrowed from the sanctuary) to see the palace at least. Sabriel on the other hand was not going to go without looking good, but money was tight since the mine venture, so she enlisted helpful Kuma in getting her cleaned, dressed and hair done. In the end she looked just as haughty as any of Toli's finest ladies yet she also bore a magical rapier and Kuma's scimitar both for safe keeping. She easily talked Ostyn into being her bodyguard rather than stay outside.

The Princes palace was the most ostentatious place in the city, a small keep built on the cliffside facing Toli bay. Nobles and captains from all the allied ports and islands were arriving on time and as each entered with fanfare, a chamberlain would call out their names and over the top titles to the crowd assembling over drinks. Notably there was the Baron Harriven of Hokar, a man who would need to be dealt with over their new ruby mine, Lady Penelope, the sickeningly voluptuous dame of Poniard, Captain Jarrad of the Trident, whose ship they bested at the Prince's regatta in Monmurg, the prince's advisors Brother Vesh of Xerbo a scraggly dressed cleric and Lord Harlun the Cruel. Of course the aged Prince Varek IV was swarmed by admirers as he stood with his princess consort, the regally quiet Madelyne of Sulward.

Kuma wasn't sedentary he slipped around to the servants entrance looking unassuming enough to get thrust into the serving staff. Soon he was carrying a tray and passing out drinks to his own comrades! the announcer called for the throng of guests and the prince to convene on the Verdant Terrace, a lawn outside of the great hall. Here they sat in chairs and were served biscuits while a marionette show was played for their decadent enjoyment; a gory tale of a barber and baker who kill customers to make pies. Sabriel wanted to get near Madelyne with intent to pose some blackmail question about a letter she recently acquired from the ransomers, but she was too far away during the show. While puppets, Sabriel a bard and Ostyn nearby seemed uneasy about the quite real blood being shed by the wooden actors. The Prince was called out on the performance afterwards by Captain Cullen much to the quieted shock of the guests. The prince in a calm demeanor deflected any concern and assured his esteemed guest the bards putting on the play were just resourceful artistes.

The crowd wad then ushered to the Forlorn Balcony where Kuma and others waited to pass out samples of glazed birds. On tables here overlooking the rocky bay, sat many repeating crossbows, a rare enough sight as blackpowder guns; these were next to cages filled with expensive tropical birds. The prince challenged any who cared to a competition, ten shots, the most birds felled wins. Kuma the druid served during the ghastly game and felt ethically queasy and Sabriel too felt a tinge of unease at the display, yet his friends Lash the sharpshooter, Cullen and Tyrrus were all eager to test the exotic weapons. Bolts rang out in all directions and when all the clips and cages were empty Cullen had won the game by a single shot. For his effort the prince handed the famous sailor a repeating crossbow to keep. During the game Sabriel was headed off from seeing the princess again by another guest they had overlooked, Thelenkar the Grey, court wizard of Monmurg. The wizened mage had many agents in the Hold and with Ostyn watching him carefully he conferred with the lovely bard about being wary of dealing with his rival, Drawmij of the Circle of Eight. Whatever business they had would surely be turned to the archmage's favor somehow. In lieu of Drawmij's council Thelenkar gave Sabriel a token of his own should she ever come to the capital for his advice.

The throng had moved on since then and the sea elf "Lord Driftwood" was challenged by the prince to a bloodsport of an unusual sort: cockatrices controlled by magic rings. As a ranger, Lash had no love for these monsters and he was sure he could control them easier. The two creatures battled through a dozen cats in a pit and once all the felines were petrified the two cockatrice battled for a tie-breaker. Lash narrowly won, defeating the amused prince, who gave him a cockatrice feather as a keepsake. As this went on Cullen was approached by salty Brother Vesh who gave him a dire warning about seeking answers in the lost Kingdom of Shar. How had he known they planned to go there? The assembled crowd moved on for the last pre-dinner event, Bowling for Jack. a notorious mutineer, One-eyed Jack Price was trussed up on a lawn painted with a target. Several marked and skulls and a guillotine sat here. Each guest who had the dark humor to try could bowl their skull toward the pirate, the closest would have the honor of pulling the rope to sever his head! Sabriel cared not to try this so she had Ostyn go for her and after many messy, bumbling bowls, the dutiful deckhand got closest to the man. It was known amongst the Envy crew that Jack was a traitor to the rival pirate organization the Crimson Fleet and that his ransom could be lucrative. Sabriel and Cullen thus negotiated with Prince Varek to instead take him as a slave instead of beheading him. The crowd seemed disappointed but Varek was honorable and respectfully turned him over.

From here the party moved inside where there was drink, dance and braggery. Kuma made sure to overload an "ogre sack" with rich foods to take back to Ogie on their ship. Ostyn got cooped up into a drinking competition with guards and was drunk out of his mind, while Sabriel again distracted from Madeylne couldn't resist the chance to sing for the nobles and earned a good ovation, including more than a few invites to after parties especially one from Lord Harlun the Cruel. Tyrrus left the feast with grotesquely big Lady Penelope to tour the palace. That tale is not told here. Lash told tales of he and his crew's adventures to the Sahuagin city and how he recovered a fabulous magic sword. This quite real boast caught a lot of attention as well given Port Toli's sword culture.

Perhaps too much attention for when the crew left the palace finally, it was split in two different groups Sabriel (who never got to see the consort) wearily got a ride back to the ship rather than an after-party while the inebriated Ostyn tried to drive two stubborn horses (with Jack tied up in back) and Kuma rode in back with an armload of goodies for Ogie. Meanwhile, an exhausted Cullen walked back to the school with Lash and Tyrrus (who had missed much of the feast). Both trios were then set upon by bludgeon-wielding thugs on the late-night streets of Toli. Though hundreds of yards apart, both sets of bandits threatened them to give their "swords" or their lives. They were referring to the Blades of Corusk of course. This arrangement ended badly for the bandits as waves of thunder and stabs from Sabriel were matched by murderously accurate slices from the guys on foot. One bandit managed to strip Greenswathe and tried to make off with it, but was cut down by the charging windmill of Ostyn's hammer and mace. The bloody encounter was quickly over and both teams searched the assailants to find little but pocket change and trinkets of a mostly lesser magical nature. Too tired and drunk to care and unaware their allies were similarly accosted, they continued on to sleep off the long night of debauchery and blood.

Rest didn't come for long however, as the windows of their rooms at the sanctuary or the port hole of their bunk on the pinnace was busted in by a shower of stones with notes tied to them. when the startling attack was over everything was silent. Lash would dash to his window and even with dark sight, he saw no source of the vandalism. Each would eventually look and see the notes all had the same message to them (in mirrored script no less):

Ahoy scallywags!
You earned yer respite mateys, but now it be time to give it the heave ho again lest ye be known as landlubbers forevermore. Secure thy booty and set sail at once for the last two swords. Neglect our decree and ye will be feeding the crabs.

The Fivefold Council, the enigmatic group that set them on the quest for the swords with an accursed black spot was now pushing them to leave their mines and mingling and leave at once for Shar and the fourth Blade of Corusk.

Game notes: The itinerary of the Princes' party is adapted directly from the Age of Worms adventure Prince of Redhand. There was some mechanical benefits to dressing up for the party in advantage rolls for any skill in the next 48 hours. I had to go online for some rules on repeating crossbows in 5E, can't recall where I got them now but I imposed disadvantage even on the archer for it being an exotic weapon. Lastly, the mirrored notes from the FFC was real and I tied to a rock to throw at Tyrrus' player. All in all a fun night. Next time, onward to the seas again!