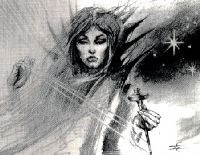 Greetings fans of Greyhawk. Today I'm going to muse about Istus, the Lady of Fate, Great Deity of the World of Greyhawk pantheon. Istus is pivotal not only to the destiny of heroes as her portfolio and the module Fate of Istus would suggest, but she is also a mean combatant according to the 83 Boxed Set.

Back in the days of AD&D, it was entirely possible for PCs to take on gods. The 1E Deities & Demigods is loaded with stats and rules on the powers of these beings. This template carried over to the early Greyhawk products and articles thus giving the DM an option if divine wrath ever needed to be carried out. These gods were damn tough but not impossible to kill. Hit points capped out at 400, AC never went higher than -10 (AC 30 by today's rules, thanks Matrox*) and most had very high magic resistances.  Let's examine how ridiculous it is to tempt fate herself in combat.

Istus resides on her own pocket plane most of the time, but when on the Prime Material Plane she assumes various forms from ancient crone to noble lady to simple shepherd girl. While amongst mortals, Istus never carries an obvious weapon, though her spindle, from which she creates her webs of fate is her true weapon. Despite this, any object she uses always hits; she controls fate after all. So yes, she could kill you with a cloak pin. Also, forget trying to sneak up on this little girl, she is the goddess of future events, she already knows whether you're attacking or not.

Provided you are still persistent enough to push Istus, her spindle has the following powers (insert your own rules).

Strand of Binding: You're trapped in iron chains. Istus is being nice.
Strand of Cancellation: Your favorite magic item? Never existed. Even artifacts are only partially affected.
Strand of Death: I like to think of this one as rapidly aging your character 1,000,000 years instantly.
Strand of Hostility: Suddenly its your destiny to protect Istus, even against your friends. Yikes.
Strand of Passage: Pesky hero, let's send you away to the Plane of Shadow, or the Ethereal Plane, or heck, Faerun.
Strand of Sending: She's feeling nice and just sends you several years into the future.
Web of Enmeshment: Whoa you're trapped in a maze of your own mind!
Web of Entropy: Great! Now she's just drained all your magic and spells in this area.
Web of Stars: This one transports everyone including Istus to her bizarre homeplane of webs and starry portals. Good luck finding your way out unless you are a genius level intellect.

So Istus basically toys with opponents or outright slays them. Even if you got a few hits in, she has 377 hit points (a ton in 1E terms) and is only harmed by +4 weapons. Even if you loaded up with big blades like the Sword of Kas and Blackrazor, she can once per day move into the future and back to heal herself. Congratulations for making it this far foolhardy adventurer. It is lastly mentioned she is served by a strange companion, a time elemental prince. As far as I know this type of creature doesn't exist in any other D&D rules, so I expect it can do all the above and then some. (*and now I know they do, thanks ProfArmitage, see comments below) Perhaps your PCs should pick on someone else easier, say Hextor or Erythnul.

A time elemental shows up in the Mystaran D&D adventure module eternal stairs.

Sean: Awesome! Should've known they'd be in Mystara. Now I wonder if time elementals are in the Immortals Set?

I tend to think of Istus as the One True God of Baklunish religion, a fantasy parallel to Allah of the real world. There are some other Baklunish "gods", who I think of as angels serving Istus. Of course, this is largely because an arabesque society that isn't monotheistic seems really odd to me - even more odd than a medieval European society that isn't. And anyway, I can definitely hear Baklunish merchants saying something like, "Insh'Istus" or "If Istus wills it".

Oops... to my eternal shame I got the name of the adventure wrong.

Its CM8 The Endless Stair.

Gary Gygax included Time Elementals when Istus was published in Dragon #69.
Anywhere from 12 HD for common to 28 for royal, AC 2, +3 weapons to hit. Summon duplicates of itself to gain 1-4 additional attacks. 1" movement, +1" per HD as they shift through time. No time-related magic works within 3", and any spell only has a 10% chance of affecting a time elemental.
Nobles can cast Time Stop, make creatures 1-2 years older or younger, age non-living vegetable matter 10-200 years, age mineral material 100-2000 years, and travel instantly to any time or place, all once per day.
Royal can use the powers twice and summon other elementals.

fao: Yeah Istus should've been played up more. It's a shame Fate of Istus involves the Flanaess but not a single Baklunish nation.

Sean: Ah that I have heard of, isn't there an Eternal Stair in FR?

Armitage: Touche, sir. I was too lazy to check back on the article when I started this. They are just as deadly as I imagined. Thanks!

If you're looking for additional ways to expand Istus's time-related powers (or those of a time elemental, Cyndor, Lendor, et al), Lewis Pulsipher's Timelord NPC class from Dragon #65 offers lots of good ideas.

I significantly expanded up on Lew's Timelord since my brother Phil played one in our regular campaign, and their powers informed, in part, a lot of my thinking about gates and planar architecture BITD (later expanded into my Knockspell #3 and #4 articles @ https://grodog.blogspot.com/2017/05/the-theory-and-use-of-gates-in-campaign-dungeons.html and https://grodog.blogspot.com/2017/05/the-theory-and-use-of-gates-in-campaigndungeons-part-2.html.

I was lucky enough to get a copy of the Dragon Magazine Archive before it was discontinued, so it was just a matter of checking the CD.

As the Chosen Of Istus, I am obligated to remind you that Time Elemental appear on page 120 of Monster Manual II. Much easier than combing through old issues of Dragon Magazine.

As for fighting Our Lady...what could be greater folly? To Her, every grain of sand on every beach in existence, every mote in the sky, is a universe of its own — replete with its own beaches and sky-motes. In all these places, She is an empress without peer. To battle Her would to be to bear the weight of all these places and times at once.

And to be crushed beneath their infinite immensity.


casl
(The Colorless Mage of Perrenland
Chosen of Istus)

MM2? Wow, and here I thought it was some diamond in the rough monster. That's what I get for not checking sources. Did the Time elemental ever get published beyond 1e/2e?

They were included in Fourth Edition, and there is a Pathfinder version in the SRD too. I can't find a 3.X entry for them, but they may have been published in some obscure corner of that massive undertaking.

I wonder how a high level Chronomancer would fair against Istus?