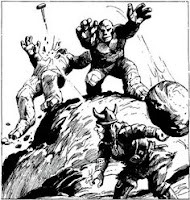 Welcome back Greyhawkers. Following up on my last post about battling Istus, I'm going to have some fun discussing the same scenario with Ulaa, the Stonewife a Greater Deity first seen in the original World of Greyhawk Guide. Ulaa (pronounced OO-lah) is the goddess of Hills, Mountains and Gemstones. She has an uncertain origin, appearing to have traits of human, dwarf and gnome alike. Ulaa is also the wife of Bleredd god of mines, metals and smiths, a nice synergy because in AD&D rules she is very tough. To recap from last time: in the old days of AD&D, PCs could potentially take on gods (despite what canon says about gods staying off Oerth). The 1E Deities & Demigods was first to give stats and rules on the powers of immortals, later referred to as avatars in the Greyhawk Adventures sourcebook which gave players a better chance to somehow prevail over a deity in combat. That said we are going with the full-power Ulaa in the boxed set; let's examine how hard it will be to cut down the goddess of gems in battle.

No matter her appearance, Ulaa is armored head to toe in adamantine chainmail (-7 AC) and carries just two weapons:

1. A military pick +5 (which she declines to name cause a +5 weapon isn't as cool as her other one)

2. A hammer of thunderbolts named Skull Ringer which is the meanest weapon in the game. Ulaa can throw this weapon every other round. so the pick does get some love. It's important to note how deadly this hammer is when hurled; Skull Ringer will instantly kill giant-kin and golems if thrown and against small/medium humanoids it will instantly kill as many HD worth as there is damage. So if Ulaa is fighting pesky orcs, she can kill 25 in one throw (not sure how that works in D&D rules, like an area of effect?), or instead, pretty much annihilate your 25th level fighter in one hit. No save.

Now it is possible to get the jump on Ulaa. She is just a 14-level fighter with an 18 dexterity after all. If your PCs are lucky enough to hit the Stonewife, she has a rock-solid 321 hp and 90% magic resistance. Ulaa might let you hit her in fact, since she is only harmed by +5 weapons and heals 1 hp/round while in contact with the earth. I suppose one could try to steal her pick and use it against her...

Even unarmed, Ulaa has powers at her disposal such as...

Earthquake: One of the sickest cleric spells in AD&D. Among its devastating effects, it opens a crack in the ground that can possibly insta-kill your character. 1 in 4 for small and 1 in 6 for medium. Good luck!

Dig and Move Earth: In case the earthquake didn't get you the first time I suppose?

Wall of Stone, Stone Shape and Passwall: So she can avoid your attacks you know, then open a hole to throw Skull Ringer at someone or just pass through and use that military pick for fun.

Summon Earth Elemental: Of course a goddess of earth would have an elemental buddy. This one is 24 HD. Don't think of turning him against her either, harmful elementals flee in terror from Ulaa.

There you have it adventurers, respect and run away from Ulaa. She is definitely an under-appreciated, underestimated deity in Greyhawk publication. As written, Ulaa sounds like she has more in common with Thor than Bleredd. Hm, now there's a thought!
Posted by Mike Bridges at 9:52 PM