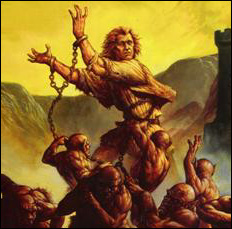 Greetings, Greyfans. As some of you may or may not have noticed, there is no Greyhawk Comic this Thursday. Well it's Thanksgiving holiday, not that a holiday has ever stopped me from putting out a comic mind you, but this year I've literally been slaving away at a lengthier comic for issue #298 (Spoiler, it has to do with Spinecastle). The next three in fact should be lengthier and thus require some substantial writing in addition to art. This is why I have Greyhawkery now, to fill the dead time between Greyhawk-fixes. Ain't that grand?
Everyone have a good weekend and stay tuned to the blog for more Greyhawk matters and the eventual release of comic #298.
Posted by Mike Bridges at 11:53 PM

Email ThisBlogThis!Share to TwitterShare to FacebookShare to Pinterest
Labels: Greyhawk

Well, I don't like this, I don't like this at all...You should be able to put out a weekly comic, even during holidays, while thinking up and creating lengthier ones for your Trilogic Finale...You need to try harder, Mort!...Ooh, Spinecstle (Bone March or Furyondy?), nifty...
Kwint