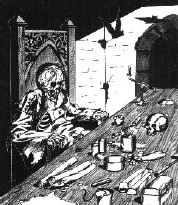 It's already time for another weekly report from my "Hold of Sea Princes" campaign, when we last left off the PCs were still snooping around in the cellar of a haunted house outside the village of Saltmarsh. As always, if you are playing U1: The Sinister Secret of Saltmarsh, please stop reading now as this post contains spoilers. Still here? Carry on! In the attic, the PC's barely defeated an assassin out for their blood and then there was the stirge to contend with! Could things possibly get worse? Here are the dramatis personae:

The four came upon a wine cellar and much to Vic's surprise (chagrin) all the bottles of wine and rum were broken. Secondary to this discovery was the dead body in plate armor, face down in the middle of the floor. As Araxo looked on from the stairs, Vic searched the body, Cuahto searched the man's backpack and Pickles, well he rummaged in a metal bin of trash. What all three had in common was rot grub infestation. Barely avoiding that 'trap' they moved on to follow some tracks to a secret chamber beyond the cellar.

The scoundrels hit the jackpot this time. Ten beds, ten footlockers, ten stools at a large table, plenty of rum...Pickles had his hands full with fresh links of sausage, a side of mutton and more. Victor however was drawn to an adjoining door barred on his side and marked DANGER! Like a moth to flame the door was too tempting. What skeletons lurked in this closet? Oh. There were actual skeletons lurking in that closet. The animated undead attacked once released, wounding near everyone (Araxo went to root in another room, finding scraps of paper, some flasks of oil (foreshadowing) and more. Pickles was strangled unconscious by bony hands and Vic was scratched up. It took the heroic efforts of Cuahtehmoc to finally bust the skeletons up into pieces. Of course while all that noise was going on....

A group of pirate looking scum had emerged from yet another secret room behind them and were ready to take the wounded, winded PCs prisoner much like they had done to the poor NPCs that were barricaded down in the cellar before them. The threatening group were fellow Holders and what operation they had going in the haunted house they didn't know, but at that point Araxo began to parley with the pirates and offered for their gang to join theirs. The leader of the "pirates" was impressed and agreed to give them one chance, a duel to the death between one of them and one theirs. Vic, being the least injured and the most foolhardy stepped up. For the pirates, they called out a gnoll!

With the battle engaged, Araxo used the time to think of an escape plan, Cuahto found a hidden treasure room behind them in the skeleton chamber, and Pickles? He just laid there unconscious, it was his only defense. The Olman ranger found the lost laboratory of the alchemist, who still sat there decomposing in his chair. Arrayed in front of him was a thick volume entitled Ye Secret of Ye Philosopher's Stone and several solid gold objects including an apple and a skull. With little time to spare Cuahto took those items and returned to the life or death battle. Vic was losing and gnoll was relatively untouched, now was the time to act!

Something remarkable happened, almost as rare as an eclipse or Halley's Comet. The protagonists fled and a chase scene began! The ranger carried Brother Pickles while Araxo used the oil he found to create a blazing fire and cover their mad dash for the cellar stairs. Vic trailed behind while the shouts of pirates sounded as they went to put out the blaze. And the axe weilding gnoll? He gave chase. Hot on their heels the gnoll ran after the group, bouncing and stamping until all of them were outside by a well. The party then split into three directions agreeing to meet back up in Saltmarsh, yet the gnoll gave chase to the weakest of the three, poor blood drained Araxo. Araxo quickly got winded and had to turn and fight. Cuahto being much more heroic, set Pickles down and turned back to help, firing a warning shot from his bow over the gnoll's shoulder. This got the humanoid's attention and it turned away from Araxo and started after the Olman. The ranger led him into a wooded area, hiding up a tree, until the hyena-man got lost or returned to the house. Crisis averted.

Going back for Pickles, Cuahto caught up with Araxo who had already shuffled back to the bar they started in. Victor, having had enough went back to their ship and crashed in his hammock. At the tavern, the bartender had been running bets on who would make it back or not. Araxo called the Town Council back to the tavern and then laid it on thick, lying to them about how they defeated the "pirate ghosts" and so on. Thoroughly bamboozled, the townsfolk celebrated the heroes and the rather shady merchant Doal Critchlow took it one step further, offering to double their reward for such a dangerous job and then he briskly wished them a safe journey home in the morning. Araxo knew he was behind the sinister secret at Saltmarsh but for now they were all too weak to do anything about it. So back to the ship the rest went, to count their loot and lick their wounds. The pirates would have to wait another time. The four would be back in Port Torvin by the next evening where a new ship and a new crew awaited them.

Campaign note: There is no rot grub stats in 3.5e? What gives? Also, we only got through half of the module (As written is a two-parter). I'm not sure on how I'll run the rest if ever, but it is nice to have some loose plot threads so soon. The guys are itching to get to sea so expect some high seas stuff next installment.
Posted by Mike Bridges at 1:21 AM

Good job Mort. I was also taken aback by our need to flee. I'll be choosing Gnolls as my next favored enemy.

Fleeing is a good plot mover. And I don't think I ever had a gnoll survive combat before. This guy needs a name!

And the gnoll still lives?

Rot Grubs finally made it back into 3.5 in Dungeonscape, as both the CR 6 Rot Grub Swarm and the CR 4 Rot Grub Hazard.

Meanwhile, I would note how this showcases the difference expectations between the 3.5 "15 minute workday" (i.e. 4 encounters then rest) and the AD&D standard of 10-20 encounters at a time.

Nice find Sam. I do see your point. I never got into Dungeonscape as I was let down by the 'environment series' after the initial success of Frostburn. A hazard is what I expected they would be, much like Green Slime.