Rejoice fellow Greyhawk fans, it is time for another installment of the Ring of Five Questions! In previous episodes we have checked in with great authors and artists of Greyhawkia like Creighton Broadhurst, James M. Ward and most recently Rob Lazzaretti. Our next entrant to the Ring, though modest, is among the most recognizable names in D&D lore and he continues to lead the way for open gaming content today: Wolfgang Baur. Mr. Baur got his start working for TSR on Dungeon Magazine. From that humble beginning he catapulted into editing Dragon Magazine and designing for nearly every game world such as Dark Matter, Alternity, Al Qadim, Planescape and Birthright. Wolfgang is the author of fourteen adventures for Dungeon including a few for Greyhawk: Raiders of the Black Ice, The Clockwork Fortress and A Gathering of Winds. Following the demise of Paizo Publishing's print versions of Dragon and Dungeon Magazine, Wolfgang started his own award winning gaming company and magazine, Kobold Quarterly, to fill the void. A pretty impressive bio, but let's see how Mr. Baur fares in the Ring...
Q1. I know you're familiar with the Darlene map. What would you say is your favorite land in the World of Greyhawk?

Wolfgang: That's almost impossible to answer, since there are so many good choices! But I would say that I used to be a huge fan of the Great Kingdom's decadence and decay, and then I had a thing for the Bandit Kingdoms, and then I liked the western lands like Zeif and Ekbir. The European influenced lands seemed more real to me. These days, I like the Lands of Black Ice and the Sea of Dust, because hey, lands of pure adventure and true killer-DM despair. I'm turning into a killer DM again in my middle age!

Q2. Greyhawk has a god for every type, but if you could actually be one Greyhawk deity which one would it be?

Wolfgang: Er, it's hard to go wrong with Pelor. When I'm writing adventures, I like the dark side and the quirky hero-gods to some degree (go Kelanen go!). But who to be? I really want to be living on the light side. And hey, Pelor made it into the core pantheon from AD&D to 4th Edition. Can't do better than that.

Q3. You have quite a resume when it comes to D&D magazines. Did you or anyone else ever pitch a Greyhawk related project that didn't make the cut?

Wolfgang: Nope, most of what I pitched that didn't make it was generic rather than world-specific. There was not a lot of love for Greyhawk outside a small circle (most of the magazine editors were fans), and the Realms always sold better. So... If you really wanted a pitch to go over, the smart freelancer would pitch the New Hotness or the Realms. The Greyhawk articles and adventures were mostly labors of love. I think that style has made a comeback in some places, but it may still be a minority taste.

Q4. You did a couple intriguing adventures for Dungeon Magazine set in the Land of Black Ice. What do you think is under all that ice?

Wolfgang: Demons in a spaceship? A lich king from beyond the stars? One of the Elder Elementals? I don't know for sure, and in some ways that is the point. When I was younger, I was sure that knowing the answer was always better than not knowing. Now, I think that the mystery and the tease is a lot of the appeal of places like the Land of Black Ice. Knowing would sort of kill it for me.

Q5. Are you for or against the "silly and anachronistic" aspects of Greyhawk?

Wolfgang: I hate that silly stuff, even when Gary did it (I'm thinking Murlynd or the various punny bits of Magic Mirror). I can stand a little anachronism, but really, once you get into lasers and spaceships, why not just call it Star Wars and be done? Although.... I loved Expedition to the Barrier Peaks. I guess I'm inconsistent on this. I'm happy to play robots vs. wizards as a one-shot. I just don't want it in my home game, the somewhat Greyhawkian world of Midgard (I like to think that Gygax would have loved the cantonal dwarves). 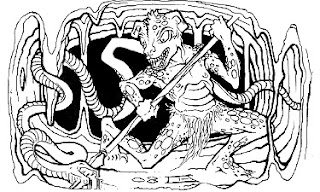 Another great interview. I struggle with sci-fi meets fantasy. It is not to my liking not even as a one shot. I am one of the few people that did not care for expedition to the barrier peaks.

Great interview.
I was actually flipping through some old copies of Dungeon just last week when I ran into one of those Black Ice adventures, and saw the name. It was neat reading Baur's early work with the knowledge of what he's gone on to create.

Yes, great interview.
Makes me want to look up some of these Black Ice adventures. Silly is as silly does. It can be fun or famine, depending on the DM & players.

Thanks guys! Yeah Baur has always been one of my favorite writers for the magazines and to actually meet him at Gencon then do the interview here has been a dream come true of sorts.