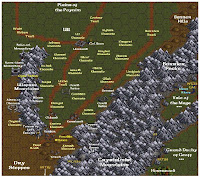 Fresh off the heels of map-maker Anna Meyer's Ring of Five interview, I have the pleasure of introducing the start of a new map series, available for download at Canonfire, that will prove to be monstrously phenomenal in the annals of the Greyhawk cartographic community. The Greyhawk Adventurer's Atlas is the magnus opus of Braggi a long time contributor to fansites such as Canonfire and formerly Harvester's Heroes. Braggi was also recently behind the old school adaptation and expansion of my own Ull series with the Wonders of Ull Old Skool Edition.

Braggi has gone to great lengths to research, map out and catalogue what he calls "one possible version of the Grand Unified Theory of the World of Greyhawk". Braggi's atlas breaks down the setting into many thematic regions each with their associated canon and fanon sources. Braggi strives to make the best setting atlas possible from all the best sources available. For this reason you will see in part one of the Atlas, dealing with the Baklunish West, that he has liberally referenced my Ull campaign articles and maps from Canonfire as a credible work alongside the base gazetteers and modules found throughout all editions.

There is alot to see just in this first part, more than I can comment on in one post. You will have to download them all as they are released to see the amazing detail Braggi has put into his vision of the Flanaess. Coupled with this first download is another feature of Braggi's, the Greyhawk Adventurer's Atlas: Appendices. This amazing pdf compilation shows the depth of Braggi's Grey-madness. He has ordered lists of published Greyhawk adventures by level and location. Plus he has also included a dizzying array of links to Greyhawk related sources. Trust me, you'll want to download these (see below). Stay tuned for more parts of the Atlas from Braggi in the coming months ahead...

My apologies to Braggi. I had the link to Part 1 screwed up. It should be working now. Enjoy, folks!

That is awesome work Braggi!

Hey! I know this is super old but I would appreciate it if you could fix the link, I would like to use this as a resource in an upcoming game for my friends.

Hi Mike, the link for the appendices appears to be down again. I would be grateful if I could access the document. Many thanks

I can't seem to fix it. Whatever dropbox its in now I don't have access to. Sorry :/

I downloaded Part 9 a while a go for a campaign and was interested in the rest of the series, as stated above the Dropbox link has issues. Anyone know where the rest of the files can be located, I tried some Google searches but always end-up back here.