Mysterious Places From the Fringes 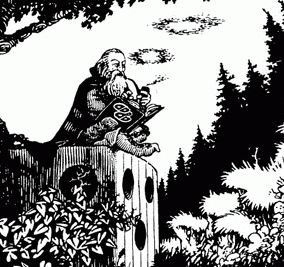 Nothing is particularly striking me today so I'm going to try to brainstorm/post about one of my favorite topics from Living Greyhawk and Canonfire, mysterious places of the Flanaess. None of these adventure locations exist on the map (yet) but I will say I'm sticking to the fringes of the Darlene map since there is less canon on these regions. All sites have been created by me off the cuff. I ask readers to please use and develop them at your own convenience (if I don't myself at a future date). Let's see what pops in my brain. Enjoy!

The Hidden Aerie of Sorontir: Somewhere among the tallest peaks that make up the Rakers where few have dared climb, is a breathtaking region of cliffs and nests belonging to an ancient convocation of giant eagles. Deeper yet within tunnels off of this aerie is the secret hold of a time-lost order of eagle riders loyal to the elven city of Eriadan. What ever befell these elite warriors and what remains of their legacy is still waiting to be found by eager explorers.

The Ghost Gate of White Fanged Bay: Fishermen and ivory hunters have dwelled in relative obscurity along the coasts of White Fanged Bay for centuries. These semi-nomadic peoples have many legends to tell and one is about the occurrence of the Ghost Gate. Every generation or so the native herds of the region are drawn to the coastline of the frigid bay at night where they madly howl, growl and stamp at a mysterious light on the water. Many hunters who have witnessed this phenomena make wild boasts of their catch that night, but true accounts tell of a strange song emanating from a glowing disc balanced on the waves. A few claims say fishermen have tried to row out to the ghostly gate but what they saw is only speculation.

The Maw of the Burneal: Far to the north bordering Blackmoor and the cursed Land of Black Ice is the primeval Burneal Forest. Many questions are still asked as to what cultures once thrived in the frontiers of the Flanaess and to some sages, the Maw may hold some answers. Lost somewhere in the leagues of trackless forest, the Maw is known best by the native Uirtag tribes who say the site is haunted and death is certain if entered. What little information that has been gathered tells of a squat building made of blackened metal but covered in centuries of foliage. Natives call it the Maw because animals and people who have dared to enter the opening of this place awaken the ghosts inside and their bodies are eviscerated; their bones spewed out in all directions.

The Great Shell: There is few adventurers who haven't heard of the Tomb of Horrors or that it resides in the midst of the Vast Swamp. The swamp is called vast for a reason and things have crept there for eons before Acererak's arrival. One such site often looked for is the Great Shell if bullywug legends can be credible at all. As their stories go there is a lost hillock that is actually the corpse of a titanic dragon turtle god who lived in the Age Before Ages. According to the bullywugs it was slain by the spear of another elder god who trespassed into the turtle's territory. So it goes, fragments of the divine spear still can be mined from this hill and used to create smaller magic spears, javelins or arrows.

The Grand Mirage of the Dry Steppes: Traders and explorers of the exotic know that beyond lawless Ull is the old decayed lands of the fabled Baklunish Empire. The Twin Cataclysms left the area a blight, but many magical mysteries persist to this day such as the Grand Mirage. Those foolhardy travelers who have strayed from caravan trails have come across a site unlike any other in recent memory. An area manifests randomly within the boundless steppes as if a mirage, but witnesses are all too adamant it is a real place. What is stumbled upon is a tiny market and water well seemingly preserved from ancient times. The serene occupants of this Grand Mirage are friendly, helpful to travelers in need of healing and food, though they are blissfully unaware of what transpires outside their village. Sages speculate the Grand Mirage is the work of Istus the goddess of Fate. Items have reputedly been brought back from this place but the entire location and its denizens always vanish by the next dawn.

Lovely and inspiring! Thanks for these!

I had fun making these. I wonder for the future if I should keep doing 3-5 of these blurbs or just do one full write up?