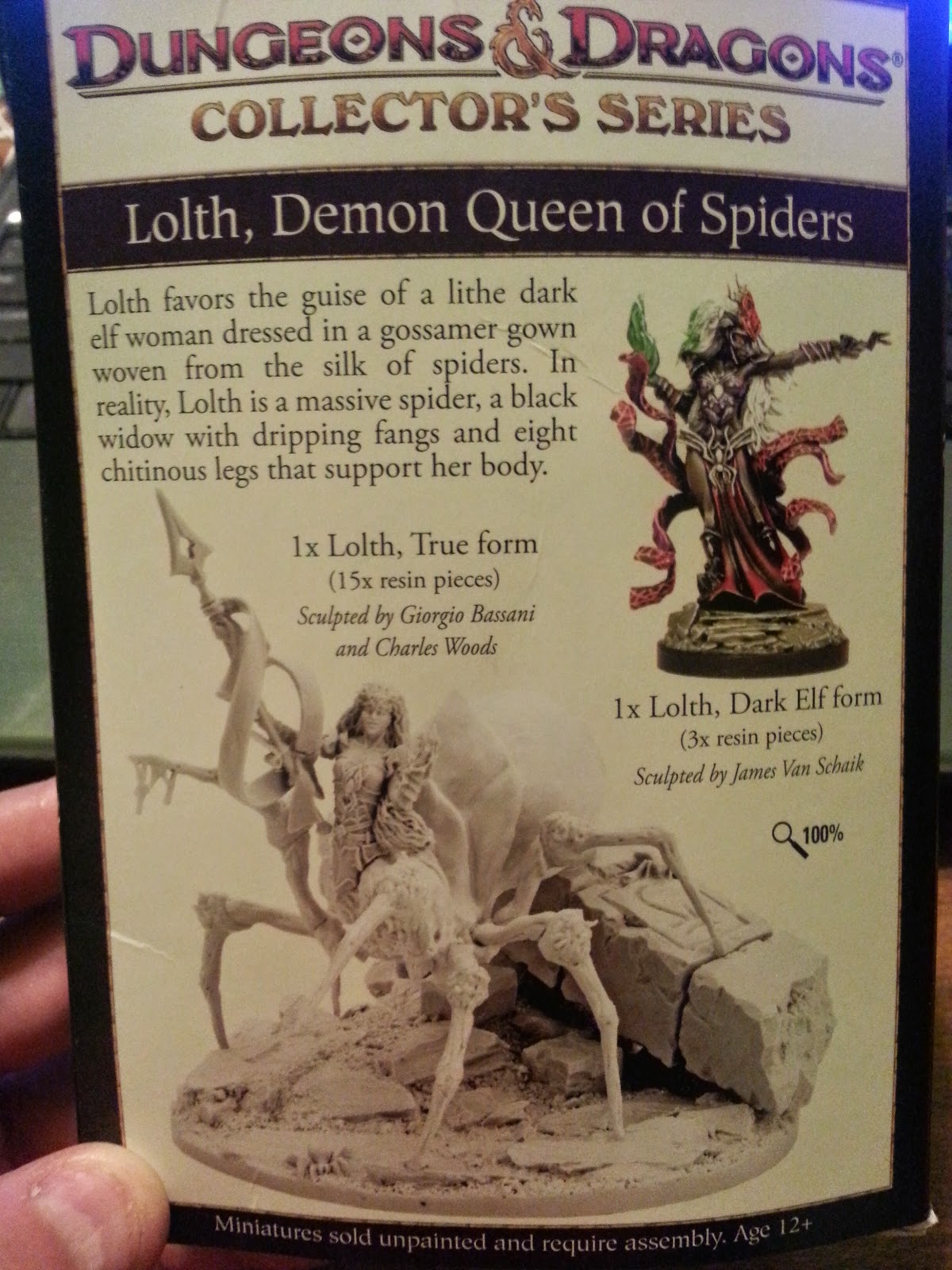 Hey Greyhawkers, Gencon is fast approaching and I'm reminded that I have some minis to put together from last year! One is the way awesome D&D Collector's Series limited edition Lolth, Demon Queen of Spiders mini set by Gale Force 9. This is a resin cast model considerable size with a large sturdy base. Follow along, let's see how it goes together... 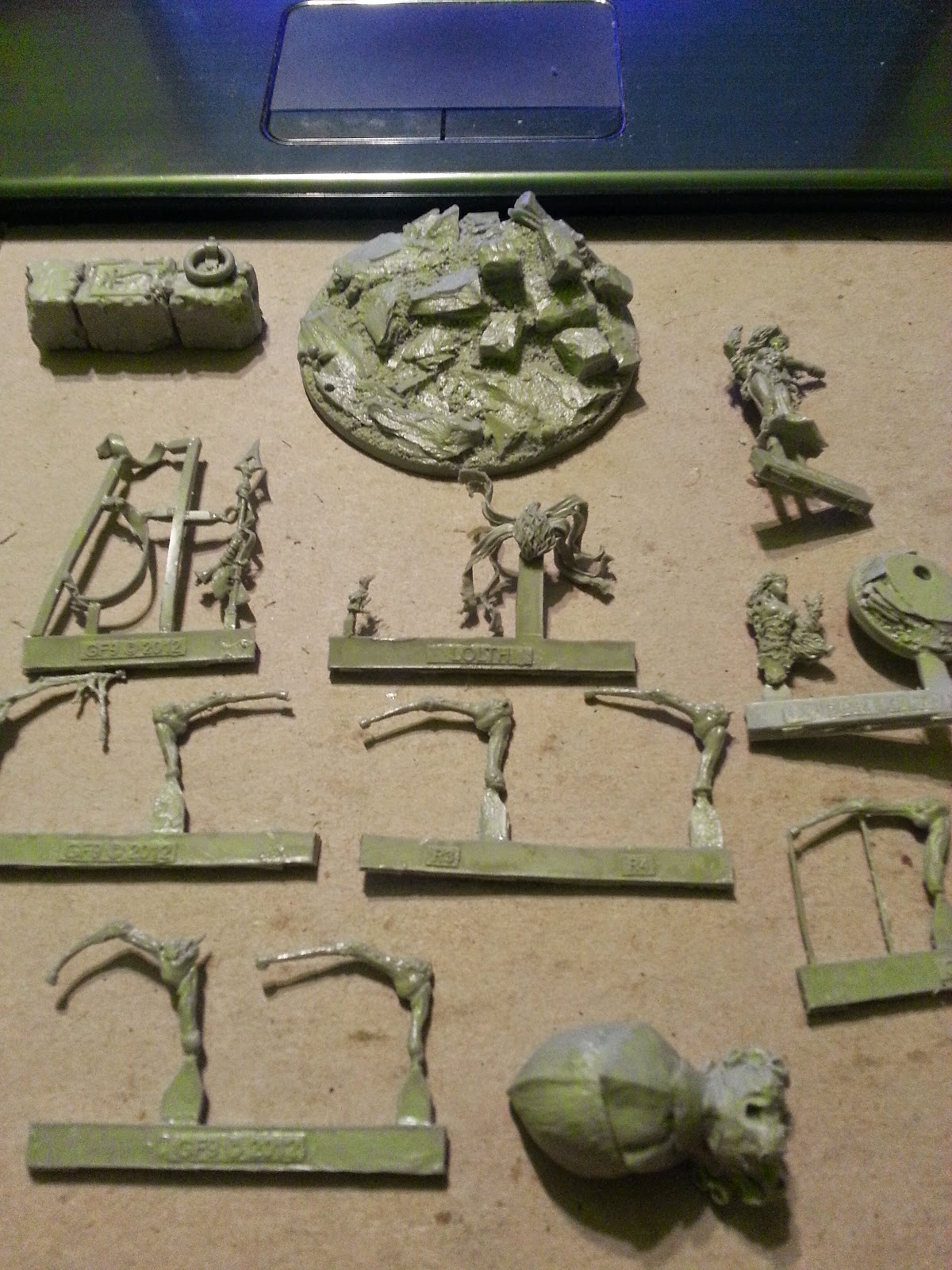 First off, not too many pieces. Resin minis have a good sculpt, but they are fragile at times so naturally I'm going to break off something I shouldn't. Lolth in drow form is four pieces (base, body, ribbons and pointing hand). Lolth spiderform has a large body, eight legs (labeled left and right 1-4) and an arm that carries a spear. The spear includes two ribbons as well (moe on that later). The base includes a fallen column with a ring set in it. Very cool. Lolth leans on inset points in this base. No problem right? 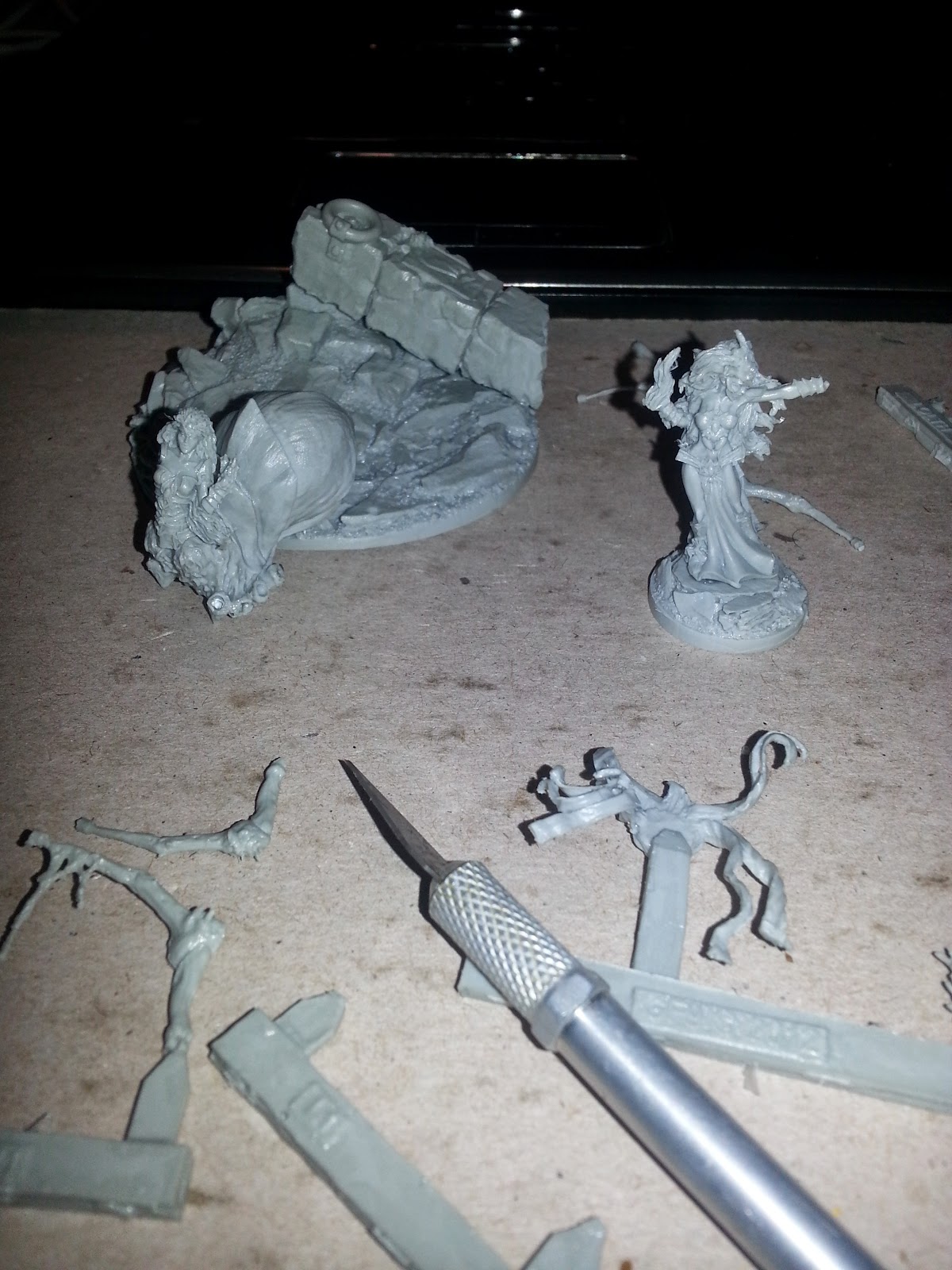 As you can see putting the drow Lolth together will be easy (I put the hand and back part of her hair and ribbons on later). The column has points that secure it to the main base. Now to figure out the giant spider and those legs. Never an easy project. I assembled a metal figure once of Shelob from Middle Earth RP. Damn thing fell apart on me in no time. I think resin being significantly lighter and with the base having secure points will make this a sturdy figurine. 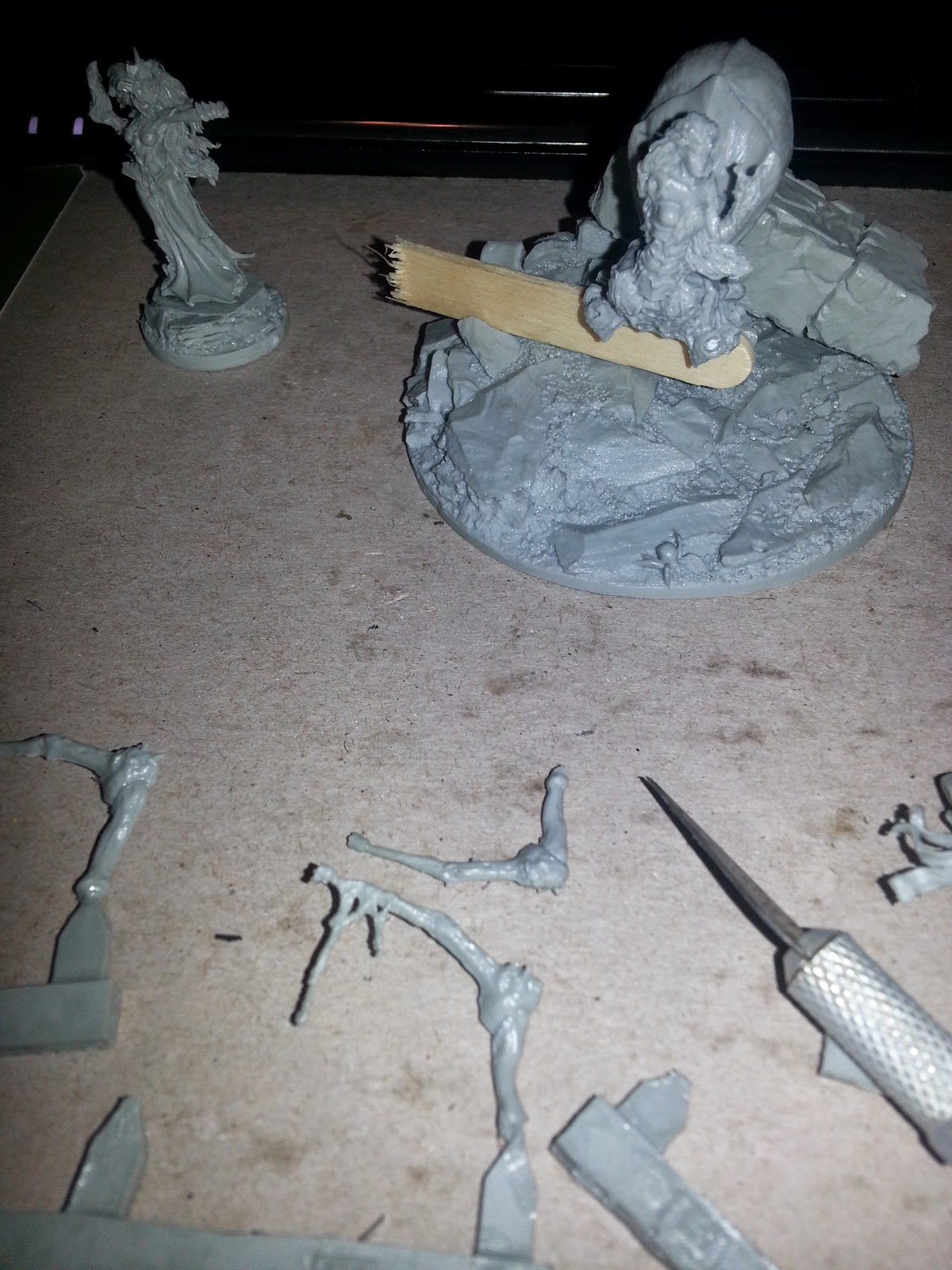 I quickly found out that the other secure points for the spindly legs onto the spider's torso (thorax?) were not very good. Then there is the issue of balance. Lolth's two front legs are raised in the air meaning the other four legs support all the weight of the rather bulky torso. Fun. I tried to gluing legs on the torso first, but then couldn't get them in the right position on the base. Then (desperately) I tried placing legs on base first and bringing the body into alignment with those. Yeah no good. After gluing my fingers together a few times I took a break and had an ice cream bar. Epiphany! I used a popsicle stick to support the torso while I glued legs into alignment. 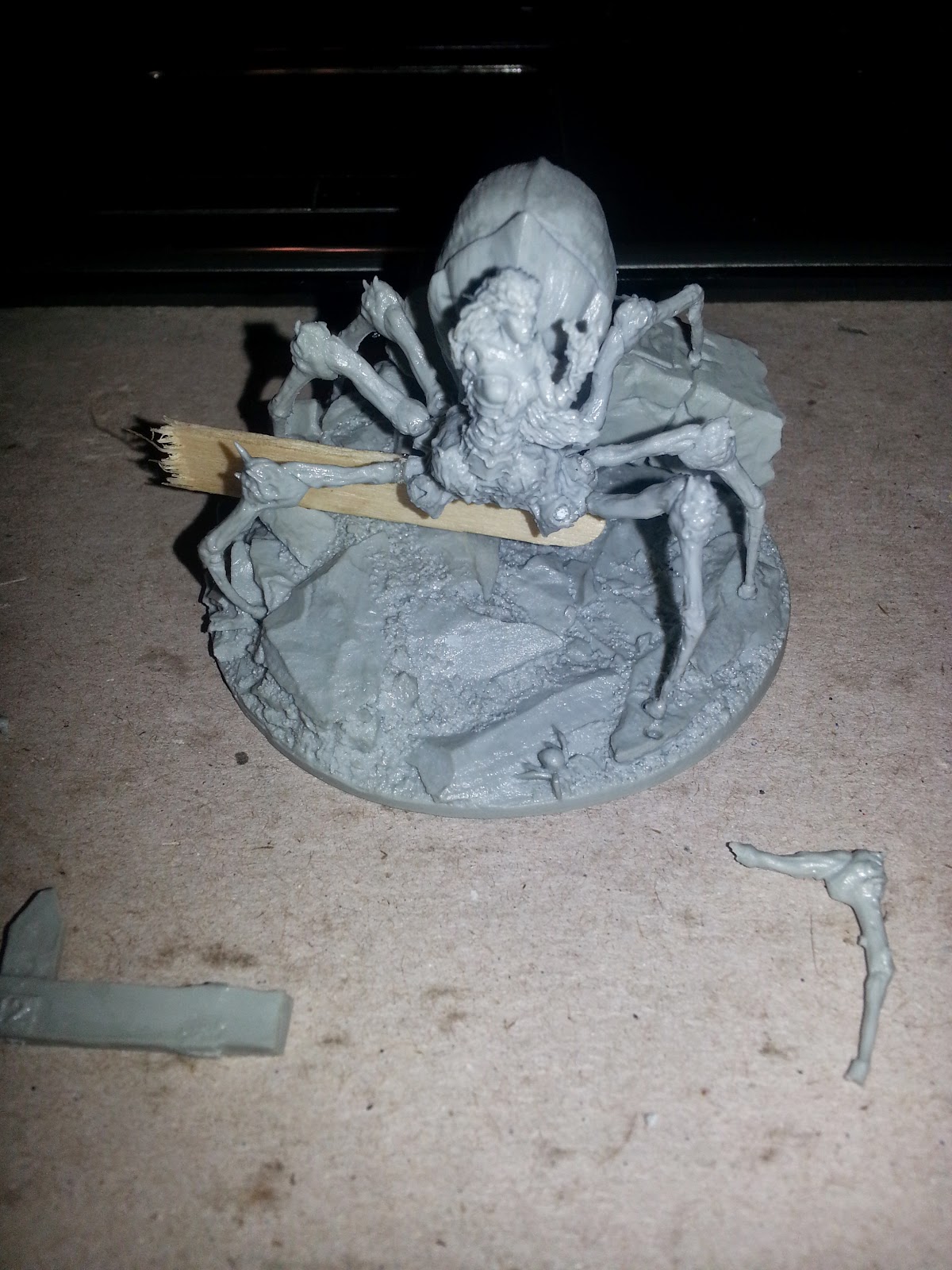 Lolth's legs went into position MUCH easier this way. By the way, there's a notch on the underside of the spider's abdomen that secures to the column. So after getting her front legs on last, I let that dry for a while before tackling the spear arm the next day. It went on fairly easy but then I realized the two ribbons that attach to her spear are all windy and delicate. Advisably I'd try to put those on before attaching to her body next time. At the time of this post I gave up trying. It's a minor detail but as you can see in the first photo of the box it's pretty cool if done right. Maybe tomorrow. 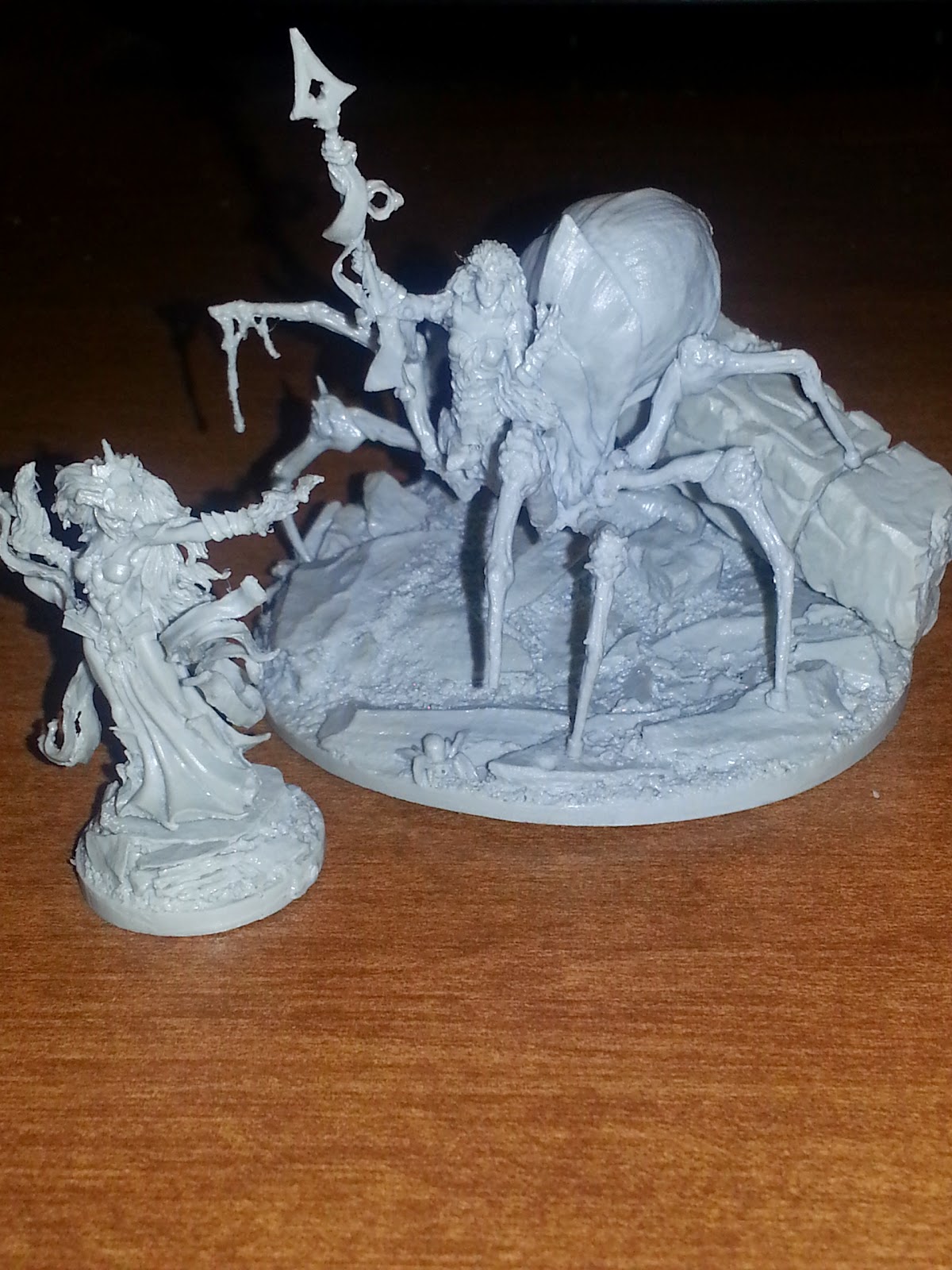 There you have it, Lolth, the Demon Queen of Mini Assembly. Good luck with this one if you ever get the chance. Maybe next year I'll do another demonstration if I ever get around to painting of this monstrosity!