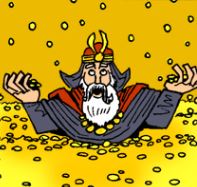 Hey all, let's have a look at one of my favorite classic Greyhawk comic strips from 2007 featuring the Dragon Magazine legend, Waldorf. Back in the mists of D&D prehistory, people had to write actual paper letters and send them by pony express to the editor to have them published in the forums of the magazine. Often if the letter was outrageous enough other people would write letters about your letter! Internet forums just don't have the same zing as a nice character debate done in print. Check it out... 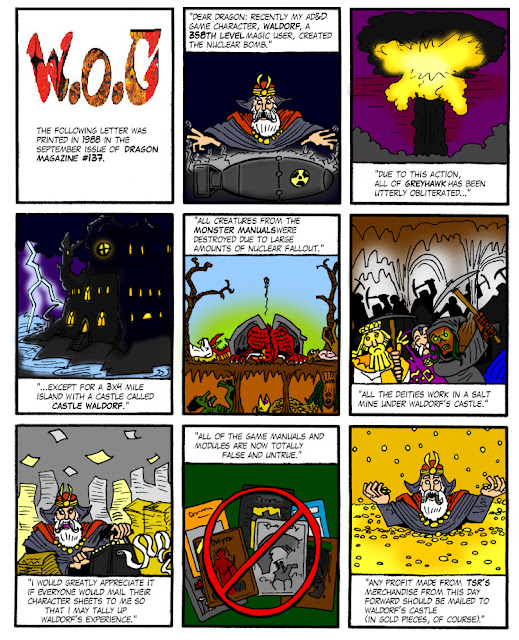 Here is the editor's responses to the famous Waldorf letter(in italics), followed by a deluge of other equally wacky letters that came in response to Waldorf's. This is classic Dragon Magazine comedy:

Of course. However; you forgot to enclose a self-addressed stamped envelope. We regret that Waldorf must lose the experience points and gold for his victory.


Perhaps you should meet Waldorf.

No address given, but we assume it was Greyhawk


Here is your “thank you.” The editors also wish to thank Bloodstone of Furondy (a 386thlevel magic-user) for decapitating Waldorf with a sling, Natricia (a 394th-level magic-user/214thlevel fighter/296th-level cleric) for recreating Greyhawk and challenging Waldorf (“as his damage was such a bother to fix”), Oharan Morshall (“The Drow From Below” who replaced Lolth) who suggested polymorphing Waldorf (“Waldorf Slaad has a nice ring to it, doesn’t it?”), and all the other characters (and players) who wrote to us.

I sorta knew this would happen, sooner or later.
Dragon #177

But as few know, this is what really happened:

From page 98 of The Adventure Begins:

Waldorf the Archmage (CN human male, Wizard 1, hp 1) is the 64 year old owner of the Roc and Oliphant Tavern. "Waldorf is notorious for his tall tales, most of which allegedly concern his past life as a deity. (He says he was eventually thrown down and made mortal by other jealous gods after a great battle in space.)He is a master storyteller for a failed wizard, and his grandiose but straightforward lies are the envy of all."

After much soul-searching I have decided to stop fighting it and make Waldorf canon in my own games.

Thank you for this, my dude.

LOL much luck to your players in the coming war against Waldorf.