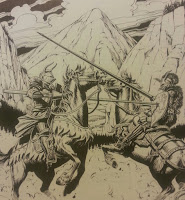 For my last Greyhawk session I ran a backdrop celebration in the city of Gradsul with a tourney as one of the possible events for players to take part. One thing that the medieval-based World of Greyhawk lacks is good material on tourneys, jousts and all that jazz. When I need to run such events I go to outside sources for ideas like the RPG Pendragon or my personal fave the D&D Companion Set which has quick rules for running dominions and tourneys. Now since this is a sea-based campaign with no nobles or knights I didn't focus on jousts, instead I used other tourney lists like archery and wrestling (check this post on other Greyhawk sports). However, jousting is what most people would associate when a tourney is mentioned. So today I am musing on where and how such jousting tourneys would be held in Greyhawk.

What the Flanaess does have a lot of material on is heraldry and of course knighthoods and titles. The bulk of it is listed in the last couple pages of the boxed set guide with enough details to provide a framework for a cross-nation system of jousting tournaments:

The Knight Protectors of the Great Kingdom are called exceedingly formidable but those in Medegia are looked on with contempt because the title is for sale. Given the size and history of the Great Kingdom of Aerdy I can see their tourneys being tied down to their own provinces and cities, with all the bluster and intrigue you'd expect from an evil realm. The Great Kingdom has numerous noble houses to start with in forming tourneys, one only needs to get a download of Ivid the Undying to get a wealth of info. The religion of Hextor would also factor heavily into these competitions since the simulation of combat is what keeps the knights busy when the Greyhawk Wars aren't raging.

Someone wanting to run a campaign centered on jousts in the (pre-wars) Great Kingdom could follow a circuit like this for example: Start in Eastfair in the North Province then southward to Delaric, Jalpa, Rel Deven, Kalstrand in the South Province and back east to Nulbish, Torrich, Mentery (those despicable Medegian knights), and back up the coast to Rel Astra and perhaps Roland then ending in the capital of Rauxes.

"Knight of the Hart are hated and despised by Iuz, the Horned Society, and even by the folk of Dyvers, it is said. There is no love lost between them and the Watchers, the rulers of Perrenland, and certain of the Nyrondel noblesse. Considerable rivalry exists between the orders of Hart and the Shield."

So the three branches of Hart and the Holy Shield knights, in their downtime from fighting the evil of Iuz could easily tour the good lands of the north, possibly including the Kingdom of Nyrond (whose cavalry is legendary for defeating the Aerdy at the Battle of a Fortnight's Length) and Perrenland (who seem rather upset at the knights for having more prowess at arms than them?). The knights of the Shield and Hart probably butt heads a lot during war, but during the tourneys their rivalry is friendly and honorable. I'd also say the two orders would be equal in skill if not size. I've personally ran a tournament campaign in this region before and it worked out incredibly well.

Lastly, to the south you have the Knights of the Watch who have a bad history with the Ferrond-Veluna nobles and knighthoods so they'd be rather reluctant to take part in cross-nation tourneys (though I could see demi-human realms like Highfolk and the  Uleks as being moderators between human orders). These Watchers are much more numerous (ten times roughly) so it would follow that their jousting skills wouldn't be as good as the elite teams of Hart and Shield knights. Then again, with a larger population of fighters to draw from perhaps the Lion Throne would dominate a tourney circuit or host theirs own entirely like the Great Kingdom. Such a circuit could cover several states in a year going from Yeomanry, Sterich, Geoff, Keoland, to the three Uleks and Gran March.

A grand jousting campaign would combine all the major kingdoms into one long circuit where you could start in the west with Niole Dra and arc your way across the Flanaess hitting all the capitals like Mitrik, Chendl, Amundfort, Rel Mord, and finally Rauxes (where a war then erupts when the Aerdy loses). This area encompasses a breadth of almost 2000 miles east-west unfortunately, so it doesn't seem probable that knights would tour that far from home unless they are individually questing knights or paladins.

One more tidbit, I like this Tournament Ranking chart from the Companion Rules; make use of it to entice your players into trying out jousting:

Given that Belvor IV is a high-level paladin, I could see him hosting tourneys as a distraction when the tedium of rulership gets too heavy. Depending on when your campaign is set, he might even still personally participate.

There was an article about tournaments in the Dragon at some point in the 80's. Needless to say, I don't remember much in the way of details, but if people are interested, I can probably find it.

Yeah definitely, Belvor and many other notable PCs from books like the Marklands or Ivid could be used in this context to add more depth to the campaign.

tom: Sure! find the issue number, it will make a good reference for the topic.

I'll have to search to see if there are any others.

Also from Dragon 118 :Surely you Joust:

Yes, Leonard Carpenter's article is a good one.