5 Reasons to Visit the Great Kingdom 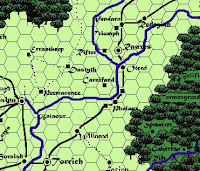 Welcome back fellow fans of the World of Greyhawk today I continue my newest feature titled "5 Reasons to Visit...". As I stated last time in my survey of the Bandit Kingdoms, most people who have played D&D for a long time will at least be familiar with the classic sites of Greyhawk and some may even know the minutiae of the setting like myself. With 5 Reasons I seek to put a spotlight on five good plots and places in (ideally) each of the nations of the Flanaess. Perhaps a new DM will be intrigued by these locations or an experienced one will be reminded or inspired to revisit these areas. Naturally, all comments, suggestions and additions are appreciated. Enjoy!

1. Undead and Fiends: The Great Kingdom (in particular the central lands directly ruled by the mad Overking Ivid V and his relatives) is home to a dizzying array of undead and fiendish characters. There is the Demonic Knights of Doom first detailed in Dragon #59. These golden armored knights are actually enchanted with fiendish powers and weapons beyond normal men. Utterly loyal to Ivid and archmage Xaene their creator, the formidable Knights of Doom lead regiments such as the mounted "Bolters", heavy-foot "Howlers" and mounted-archer "Pointers".

Beyond these terrors is the Death Knights, created by the demon-prince Demogorgon from the old order of the Knight Protectors. Many of these undead knights are major villains in their own right and pay no heed to Ivid. Furthermore, Ivid V and his fell priests of Hextor created the undead Animus to instill greater loyalty in his nobiles and commanders. Not as strong as a lich or a death knight, these undead are still highly intelligent and powerful in many unique ways. Lastly, due to the diabolical magic at Ivid's disposal, even his personal Companion Guard is said to have fiends among their ranks.

2. Rauxes: The capital of the Great Kingdom of Aerdy for centuries, was Rauxes. This city has undergone many changes in just the last few decades of Greyhawk publication history and all are quite suitable for a campaign built on tyrannical intrigue, high magic and impending warfare (see the free PDF, Ivid the Undying). The Rauxes seen in the module Fate of Istus (with a decent map) once had a lofty population of 41,000 but the brutal rule of Ivid brought this number down to 35,000. By the time the Greyhawk Wars had concluded, Ivid's atrocities had reduced the city to about 22,000 that is until the city's ultimate ruination following the battle for succession of the Overking (see Living Greyhawk Gazetteer).

Rauxes thus has a few eras that DMs can utilize for a long story arc of self-destruction, from once mighty imperial capital to a magically hazardous ruin where only treasure seekers now venture (I like to think of GW's skirmish game Mordheim).
Rauxes is also home to a few arch-magi (Xaene, Karoolck, etc.) and artifacts of irredeemable evil. First and foremost is the fiend-seeing Malachite Throne, where the line of House Naelax sits (or used to pre-wars). It is also possible more than one of the Regalia of Might are found in Ivid's lands nevermind other relics of power mentioned below. Whatever era you play in, the fate of these high magic people and items is still entirely within the DM's hands to this day.

3. Dastryth and Errantkeep: These Naelax lands were probably once prosperous fiefs in the heart of the Great Kingdom, but in the post-wars era, they are now ruled by two deranged animus brothers, Darrien and Marinn. The two have a life long rivalry that continues in undeath with both turning all their remaining citizens into armies of zombies to continue their blood feud while they watch safely from their castles. This setting is a suitable gothic horror (or zombie survival) environment to have players wander into before encountering the hard stuff. The brothers are notable for their treasured magic tomes which would be highly prized by power players like the Circle of Eight or the Scarlet Brotherhood.

4. Permanence: Speaking of the hard stuff, there is the nearby castle named Permanence. This many turreted horror of leaning, twisted architecture is built on a slab of red rock and is home to one General Kalreth an animus warrior loyal to Ivid. Kalreth and his equally formidable lieutenant Balraize command a score of Doom Knights from this dubiously magical castle. What's most attractive about this castle for a high magic campaign is the lure of coveted banestones within its dungeons; magic stones which greatly aid in the enchantment and permanency of magic items. The trouble is, Kalreth hates wizards and will slay any who sets foot in Permanence with his dark artifact the Spear of Sorrow. Adventurers had better bring their A-game to this place.

5. Rifter: Near the capital is another interesting keep built by Ivid II as a fall-back point should Rauxes fall. This magically reinforced bastion is armed with an array of ballista plus a garrison of Companion Guard and Fiend-Knights as well. What is most hair-raising is that the bunker allegedly contains a Sphere of Annihilation and the famous Machine of Lum the Mad. Imagine the possibilities of breaking into or assaulting this small keep. Good luck!

In the heady days of early 3rd Edition I ran a campaign in the Great Kingdom using "Ivid the Undying" as a resource. The PCs were caught in the middle of the civil wars that tore the kingdom apart after the Greyhawk Wars. Very dark. Very grim.

The last session featured an amphibious assault on Rel Astra.

Stelios: Very cool! I almost included Rel Astra in the write-up but as a free city it may be an entry all its own. We shall see.

Dave: No problem my friend! I'll be getting around to your side of the map soon.

Thanks Allan! Well I do plan on hitting the provinces of Aerdy. Interestingly there is hardly any published adventures set in the GK proper. Most classics of course are set on the fringes or near Greyhawk itself.