Five Shall Be One: The Quest Begins!

Welcome back fans of Greyhawk, today is the second installment of my new 5E Hold of Sea Princes reboot of the 2E modules Five Shall Be One and Howl From the North, set in the south seas. What sort of intrigue and escapades will the crew of the Sea Hag get into this week? Read on!

When last we saw the crew of the Sea Hag, they had been ambushed in their sleep by goblin-sailors from the rival vessel the Iron Trident. This delaying action didn't work however, and the survivors were questioned, looted and tied up. The next morning the regatta was getting underway in the harbor of Monmurg. a grandstand stood near the water's edge where the nobility and captaincy of the Hold sat with their ruler and guest of honor, Prince Jeon II. The Sea Hag for its worth was getting into position along with nine other large, younger ships. Compared to these vessels, some made for war, the weathered crab boat stood out on the glittering waters. Among them was the Azure Jewel, the prince's best carrack, the Lyrical a sleek white caravel from the port of Windsong and alongside the Hag was of course the Toli Armada's finest, the Iron Trident, bristling with energy and ire for reasons they couldn't say.

Kuma Sand had consulted the sea gods ahead of time for Captain Cragg, and knew the weather would be fair and their racing winds moderate. The crew all were at their stations, Cullen standing at the wheel with Cragg at his side and Sabriel nearby, ready to relay orders and use her talents to raise morale. The signal was made and the city erupted in cheers as the ships started the regatta, a complete circuit of the harbor vast front. The Sea Hag jumped out ahead with the Iron Trident cruising close alongside its starboard side, the old crab ship still had legs. Five vessels began to lag behind, including the Azure Jewel, then on the turn the Sea Hag and Iron Trident began to have complications as they got too close to one another, both vessels falling behind to the swift Lyrical. Kuma again dropped a rope and made a subtle appeal to the four wind goddesses. Their sails then filled again with a quick boost of wind and the Trident fell out of sight. On the last stretch the Hag gained, the crew all straining and focused on their duties, then by a prow the Lyrical was defeated. The harbor roared in applause for the two ships.

Both winning crews were brought to the grandstand to meet Prince Jeon II a handsome young captain, but hardly regal, and his rival from Port Toli, Prince Varek IV an older, shrewd looking noble. They gave each ship their prize purses and all the sailors were presented with a silver pin bearing the symbol of the Sea Princes, a crown over a ship. The pin gave them the prince's favor for a year.  Captain Cragg was presented a silver cup as well which was to bear his ship's name and be displayed in the prince's palace. Just as they were ready to attend a party, news spread through the crowd and reached the princes that the Provincial Navies of the Great Kingdom were amassing an armada in the east Azure Sea and further, had issued letters of marque against the Hold of the Sea Princes for daring to run their economic blockades. This news caused a nationalistic furor among the captains. The Prince's Fleet all called for a show of strength and immediately left to rally their ships. Prince Varek and the Toli Armada faction however changed their tune and decided to return home and guard what they have instead of engaging the Great Kingdom of Aerdy. Captain Cragg, loyal to Prince Jeon and Jetsom Island was ready to act, but he was told to stand down. He and his ship were too old, the new fleet could handle this for now.

Sulking, Cragg and the Sea Hag returned to Jeklea Bay to what else, crabbing. Sabriel Loreweaver consoled the old drunk white beard privately and learned he was in a battle twenty years ago when the Hag was in its prime. He had lost both his sons in that conflict and his wives left him. He was useless but the bard lifted his spirits some. That night, Cullen discovered a hidden crate in the hold. After some effort he found it contained a cannon from Cragg's warship years. Confronted, Cragg apparently thought he had sold them all and forgot it was down there. Was it a sign?

A few days later they had brought their latest catch to the far flung city of Sasserine on the bay. Here, Cragg and his officers sold the lot to Vico Bevenin a businessman of a shady sort. Also dealing with the Bevenin family was a young half-elf mage named Mallon who helped identify a minor wand the captain needed to sell off. Once the crab was delivered, the crew went about the town enjoying their time off. On their way back to the docks, the group noticed the young man in an alley fighting off three chainmail clad assailants. Lash used his sea elf abilities to call up a fog cloud so Mallon could disengage. Cullen feeling bloodlust rushed to the cloud with Ostyn not far behind. Sabriel noticed more of these mercs in the shadows though, ready to flank them. Tyrrus was undaunted and sped to the flank to hew one down while Kuma sprayed poison spells at a second to keep his mace at bay. Cullen and Ostyn's flashing blades took down one armed man lost in the clouds and drove a second back. Lash climbed to a roof for an archer's position and saw the attackers already had a man up there on overwatch. Fiery rays shot out from the man's hand, barely missing Lash who dove for cover before loosing an arrow back at the wizard and hitting his arm. The mage fled, flying away into the night.

Just then, the leader of the mercs emerged from the shadows bearing a two handed sword ready to cleave down Tyrrus. Ever-alert, Sabriel's hand shot out defensively and from her lips a thunderous wave of force knocked him back. Tyrrus then turned his attention on the leader and their large swords clashed. The battle was cut short however as a mob of Sasserine city-watch pounced on both groups and arrested them. Apparently they had been gathering to bring down a smuggling deal and the Hag's crew was in the wrong place at the wrong time. At a prison tower, the crew was in a communal cell with Mallon the half-elf as well. Their enemies were in a different cell but were soon released. Bailed out by Vico Bevenin. Mallon thanked them for saving his life and he too was being held on trumped up charges. The men who attacked him had been hired through Vico for an expedition and decided to double-cross him instead.

Captain Cragg then entered, his pleas to the guard were not going well though. Sea Prince sailors were always distrusted in Sasserine. Before the crew could argue their case, the door to the cell block rumbled and crashed open. A small whirlwind of paper and debris whisked into the chamber knocking everyone about. The dust devil then passed through the bars of the cell and dispersed, leaving behind mysterious letters at the feet of all in there save Mallon. The letters bore the wax seal of the enigmatic Fivefold Council only known among pirate culture as the original lawmakers for all conduct upon the seas. Opening the letter, they were stunned to discover the Council had chosen them for a quest most perilous. Their arcane mark was soon transferred from paper to their hand. The Black Spot. And Mallon cowering in his corner, raised his hand to show he already had one before they met. The powerful Council had twisted fate in order to bring them together...

Campaign notes: The letter from the Fivefold Council is REAL! Check it out ye squabs. 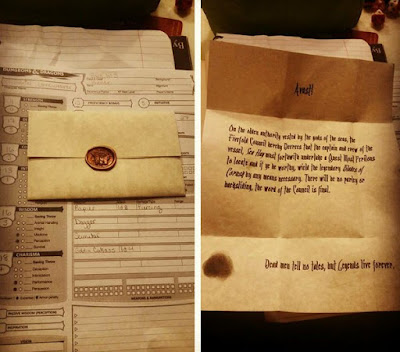