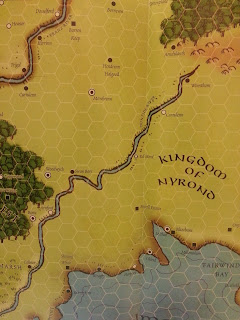 Welcome back, World of Greyhawk buffs as I once again treat you with my ongoing feature titled "5 Reasons to Visit...". If you haven't seen my overviews of Keoland, the Bandit Kingdoms , Great Kingdom or Furyondy, be sure to check them out. Anyone who has played D&D should at least know the classic adventures of Greyhawk and hopefully you hard core fans like me, also know the setting's esoteric material. With 5 Reasons I seek to put a spotlight on five good plots and places in (ideally) each of the nations of the Flanaess. Perhaps a new DM will be intrigued by these locations or an experienced one will be reminded or inspired to revisit these areas. As always, comments, suggestions and additions are appreciated. Enjoy!

1. Rel Mord: The capital of Nyrond was first developed in the module Fate of Istus and later expanded upon in The Marklands (the best source for things Nyrond). This great walled city on the Duntide River sports 34,200 to 46,500 people depending on your era. This is also where the (future) sage Pluffet Smedger the Elder and the Royal University is located, first mentioned on the very covers of the boxed set Greyhawk guides.

Nyrond is ruled from Rel Mord by King Archbold III (or his son King Lynwerd post-wars) and starting at any published Greyhawk timeline, the strain of war with the Great Kingdom and Iuz on either front wears on his stalwart kingdom. This is a nominally good realm (lawful neutral) yet constant political drama, massive war casualties, peasant poverty and droves of refugees moving out threaten to tear Nyrond as we know it apart. During the timeline of King Archbold's succession, the rather large domain of Nyrond and its varied factions could be a perfect place to set up a campaign akin to Game of Thrones.

2. Star Haunt: To the west of Rel Mord, the Celadon Forest and it's inhabitants' strife concerning Baron Bastrayne of Woodwych makes for a good sub-campaign, but within the Celadon itself is a site that is adventure worthy all on its own. Star Haunt is an aptly named, star-shaped ruined castle built long ago by an insane tribe of Oeridians.

What else is distinctive about this ruin? For one, the walls of Star Haunt are covered in a phosphorescent moss giving the ruin an eerie glow at night. Do you expect monsters to lair here? Of course this is monsters, but it's much worse than you think. A strange curse on Star Haunt's location imbues all monsters living here with a displacement effect. That's right, just like displacer beasts. Now imagine something like displacer trolls or displacer rust monsters!

It gets even worse unfortunately, because the longer monsters stay here the more they fade out and become specters and wraiths. Hopefully not displacer wraiths though. Nuff said there. There is undoubtedly still treasure to be had in Star Haunt, because the locals give this place a wide berth and for good reason!

3. Kurast's Tower: To the east of the capital on the borders of Almor is another point of interest called Kurast's Tower. At the source of the Flessern River on a hill is a plain looking, squat tower made of a black stone unknown in the Flanaess. The tower is owned by a clumsy, absent-minded wizard named, yes, Kurast. Old man Kurast is a water-elementalist and normally keeps to himself.

Then during the times of the Greyhawk Wars after the fall of Almor, the area of this tower becomes a Nyrondese garrison to keep an eye on the vile animus Duke Szeffrin across the border. Kurast is a curious fellow going from joking and friendly to Nyrondese forces, then alternately grumpy and shut away for days in his impenetrable tower. What watery magic goes on below in his dungeons is currently open to DM speculation, but he is known to have sent elementals down river to deal with humanoids in the past.

Kurast makes for a perfectly new and unusual benefactor wizard in a campaign setting that is already full of typical archmagi. His location on the buffer zone between two major kingdoms could give him more prominence if war escalates on the border. Then again, if PCS rub Kurast the wrong way he could also be one of their biggest antagonists!

4. Claw Point: On the southern coast of Nyrond is many small towns and ports, but one remote peninsula called Claw Point bears visiting. Claw Point is used by smugglers to hide in its sea caves, but lately the sides of this cliff have eroded to reveal a network of catacombs from the early Oeridian migrations. Naturally tomb robbers and adventurers down on their luck have come here to pilfer the burial ground that is said to run a mile deep.

The trick to Claw Point is accessing its tall cliffside entrances by climbing all the while knowing that the Sea of Gearnat is quite windy year round. Once inside, the tunnels are constantly crumbling and undead creatures lurk here, entirely ready to follow you outside. Inevitably some robbers also return from here with curses and diseases. A small price to pay for buried Oerid treasure.

5. Crystal Springs: Lastly, north of Rel Mord is another notable location at the headwaters of a river, called Crystal Springs. Strange bluish-quartz stone formations surround the bubbling springs that form the Duntide River and despite being brittle yet centuries they hold no further importance except as a way stop for several garrisons in the region.

However, below the springs somewhere, is an extensive series of chambers or caves which may hold the true secrets of Crystal Springs. Despite reports of monsters and magics, no one to date has ventured down there long enough to find any answers. Crystal Springs is a good location for a DM who wants to develop an their own dungeon crawl yet set it near a few centers of civilization (its at the edges of Nyrond, the Pale and the County of Urnst). 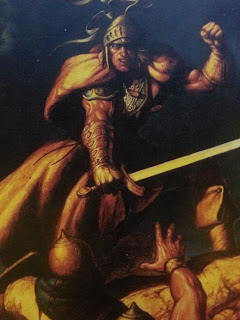 Your idea of a Game-of-Thrones-esque situation is quite interesting. I think Nyrond could also lend itself well to some fleshing out with Birthright or similar material. Lots of possibilities!

My current campaign started in a small but vibrant coastal town between Wragby and Storport. Storport has been heavily damaged and nearly abandoned by a series of earthquakes and many folks have migrated to this other town. I have modelled Trennonport across the bay after Pathfinder's 'Riddleport' and expect some action will take place there, bringing in the tensions between Nyrond and the Great Kingdom.

One further site of note in Nyrond is the Demon's Claw or something like that off the coast near Wragby. I think it was detailed in a Dungeon adventure. Great series! Cheers!

Once I finally get my playing group together again, I'm intending to run my next campaign in Nyrond -- placing Luke and Ernie Gygax's Lost City of Gaxmoor in Almor, and then watching the fur fly as the returned city becomes a bone of contention both with the players and the monsters that have taken it over, but also between Ahlissa and Nyrond as I'm casting it as a relic of the glory days of the Great Kingdom, taken out of sync with reality by Urnus Gregaria when he realized just what the Naelax Overkings were really about.

I just might take and run with the idea of using Kurast's Tower, as he's in the right neighborhood.