Five Shall Be One: Beauty and the Beast 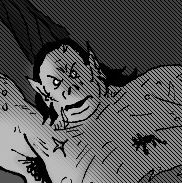 Welcome back Greyhawkers, today is the fifth installment of my new 5E Hold of Sea Princes reboot of the 2E modules Five Shall Be One and Howl From the North, set in the south seas. What sort of high adventure will the crew of the Sea Hag get into this week? Read on, and beware, this story may contain spoilers!

When last we saw the crew, they had just defeated the vile shadow dragon and recovered the first Blade of Corusk, named Dreamsinger. Properly rested and patched up, the party searched the ruins and caves for anything to carry the king's ransom worth of treasure they now possessed. Encumbered with sacks and rickety boxes they made their way out of the ruined city to retrace their steps back through the jungle. The way back was clearly blazed thanks to their earlier ranging efforts and so it was on the second day trekking on the path that Cullen and Mallon sped ahead of the slowed group to alert their ship of their arrival; meanwhile Sabriel began to feel the first effects of her newly attuned sword as she entered a trance-like fugue state and saw a vision:

"You see a single dolphin swimming and jumping across a vast cerulean sea. The dolphin dives underwater leaving a wake behind as she speeds toward an imposing cliff of white stone. You sense that the dolphin has a purpose and knowledge, but what she knows and exactly where she is heading you don’t know."

Sabriel wandered off the path too far before the others noticed her altered condition and there she crashed through the bushes into a clearing where stood a coven of three greenhags around a cauldron. Near them lurked three tanned ogres with gnarled clubs and behind them all sat a flimsy wooden cage containing a damsel in distress. The creatures were all startled to see the dazed woman enter their territory, mumbling incessantly about dolphins. Speaking only in the local Olman tongue the hags commanded their guards to seize their newest "pretty" and put her in the cage. They were disappointed however, when four other men came following. Sabriel swaggered, lost in her vision while a fight seemed to be at hand. A moaning plea for help came from the caged woman, her accent familiar to them somehow.

Just when Sabriel roused from her reverie, Dreamsinger vibrating in hand, Kuma schemed a brilliant plan with her and his compatriots. Sabriel, using Kuma as an interpreter, presented the ogres with a bribe of shiny gold and trinket jewelry if they only would turn on their mistresses, the greenhags. Small sacks of gold thrown their way, were distracting enough and soon the ogres leered at the grisly hags and complained at how they never gave them "shiny stuff". This affront was met by a flashes of magic as an ogre was turned into a boar, but the other's spells had no effect on the humans. As the ogre-boar squealed and wandered off, the other two raised their clubs and made to advance on the hags, who backpedaled away from their cauldron and cage. The hags screeched in horror as Kuma laid a faerie fire upon them. Then the party attacked in force with their ogre allies. Ostyn circled the trio and saw the woman in the cage was a sea elf like Lash who just then took a bead on one hag hiding behind that same cage and hit her with a sharp arrow whose enchantment entangled the horrid woman. The hag was strong however, and broke out of the bonds, using her claws to slash the throat of one of the traitorous ogres, who fell and bled out quickly.

Tyrrus meanwhile, vaulted the cauldron (where a chest lay behind) and slashed another hag so viciously her tendons were sliced, slowing her retreat. Sabriel charged and ran her rapier into the third hag who replied with a vicious mockery about her feeble strike. The bard was infuriated at the insult and soon the third ogre was bashing at the hag from over top Sabriel's head. Kuma aided this effort, a thorny whip grabbing the witch's ankle and dropping her prone. Then, as the fallen hag tried to stand, she was slain by the ogre and Sabriel, who ended up half covered in hag-gore and straddling the larger hag's twisted face. Tyrrus harried the middle hag, cutting at her relentlessly until she tried to polymorph into a bird and fly away, but the steady sentinel was too quick and swatted her down to the grass, finishing her off with a bloody overhead cleave. The last hag tried to run as well, but couldn't go invisible due to the faerie fire; she too was cut-down by arrows and dual weapons from the striding Ostyn. With only one ogre left, Sabriel made friends with "Ogie" and as acting captain, she invited him to join their crew. The stupid creature only wanted more treasure so he happily agreed and offered to help carry all their loot in the cauldron!

The sea-elf woman was released and immediately recognized Lash Driftwood as her long lost kinsman. As she retrieved her belongings from the hags' chest (kept among other treasures, trinkets and magic) she told the others her name was Eristen Undertow, also a ranger of the deep; while Lash left to join a human crabbing ship, she ended up serving a powerful archmage instead. That same wizard had in fact sent her to track down and bring back Mallon who also served the same master. Tyrrus then inquired who their master was, to which she boasted proudly, the Archmage of the Azure, Drawmij of the Circle of Eight! Drawmij was famous both above and beneath the south seas. Knowing Mallon was close and further deducing from their black spots that they shared his quest, Eristen decided to join their group in addition to Ogie who hoisted Sabriel on his shoulder until they found their rowboat to return back to the waiting Sea Hag.

As they floated to the mouth of the Sabriel River they saw the abandoned fort where their ship was still docked. However, a second ship, the Strongbow was anchored not far off. To their chagrin, the Sea Hag's crab crew had surrendered to a well-armed mercenary party who had also apprehended Cpt. Cullen and Mallon, bound together near the imposing barbaric Captain Gundar carrying a hunting falcon. Also in charge was a noble from the Bevenin family who eagerly waited for the treasure laden rowboat with some of the same mercenaries they had fought back in Sasserine, led by the great sword swinging leader, Harkon. The mercs laughed, taunted the bard and demanded their surrender to come back with the captured Sea Hag or else be left behind. This upperhand was lost on the questing crabbers though, Tyrrus exited the boat and marched right at Harkon, while Kuma's faerie fire spraying out again over the unwary men. An arrow streaked out from Lash's bow and hit the Bevenin noble who crawled away in pain toward Gundar.

The mercs raised weapons and engaged Ostyn, Eristen and Sabriel in stunning weapon-play. The bard's gloryseeking inspiration spurred loyal Ostyn and the others to battle harder however. Harkon in single-combat, was hewed badly by Tyrrus' greatsword and dropped to a knee in exhaustion, while his men tried to gang up on the brutish bosun, with one giving him a concussive mace strike from behind. Lash put another arrowhead into the rear-end of the fleeing noble, but his second shot harmlessly deflected off the opposing barbarian captain who only watched by the captives. The mercs soon broke, the mocking merc spit on by Sabriel as he fell to Dreamsinger's blade. Once Harkon fell unconscious to a vicious whip strike, the remaining two tried to surrender yet the first was cut-down by Tyrrus when he heard the yell of no quarter! The last foe then backed into a huge figure, Ogie, who grabbed the man and tramped off into the woods to do unspeakable things with the hapless man.

Captain Gundar was backed away from Cullen and Mallon by a roaring gust of wind emanating from Kuma the druid and once at the dock he called to his own men from the Strongbow to slice the throats of all the Sea Hag crew if they did not parley. Weapons were lowered, Harkon and the noble were tied up, and Cullen and the half-elf mage were freed. Captain Gundar's neutral crew came to an accord and returned to their own ship with no further conflict, having only brought the double-crossing mercs here to catch Mallon and his treasure. Mallon was overjoyed to meet Eristen again, and as Sabriel was just about to ask him to decipher her dream-vision (it was figured the dolphin meant Eristen), when she triggered another trance:

"You see an arc of green color which slowly takes form and clarity. It becomes a strange, curved, green sword which you see sweeping effortlessly through anything in its way. You sense that, in the arc of the sword, there are echoes of time; the ebb and flow of the seasons, the bitterness of winter, and the explosion of life in the spring. How such powerful feelings arise from a simple image of a moving sword you don’t understand."

With the visions subsided and the Sea Hag regained, Cullen was appraised of their newest passengers, and they all set sail back to Sasserine to ransom the foolish Bevenin noble back to his family for a coffer of gold, a favor and a promise to never meddle in their affairs again. Harkon was also remanded to his guild sans gear after he apologized for his behavior from their first meeting. While in port, the crew rested, got new attire (Ogie was outfitted with large armor and a tricorn hat) and Lash sold their hoard of loot. After the generous shares were passed out to the entire crew, with so much money suddenly in hand, the officers told their comrades from the Sea Hag to go back to their old trade (Kuma really wanted to stay too) while they purchased a smaller, newer ship to resume the quest, the pinnace, Envy. Eristen and Mallon patiently waited for the fated-sailors to finish their personal business, but reminded them that they needed to sail north to the white cliffs from Sabriel's dream which they revealed had to be Drawmij's home on the coast.

Campaign notes: Nothing to share this week except a wiki article on Drawmij. But stay tuned for next episode, there will be more to see!

I've always wanted to ask: How can someone from Ull spend so much time on the deck of a ship without getting sea-sick? ROFLMAO

Mystic: That is truly a mystery...haha