Tales from the Yawning Portal Rant 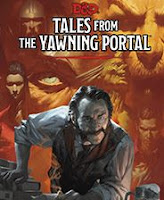 My friends will likely hate me for ranting about this again, but here we go. Today Wizards announced their newest publication for April, an anthology of 7 classic adventures updated to 5E, Tales from the Yawning Portal. The infamous entrance to Undermountain is the framework for this collection of dungeons from "other worlds" if by other worlds they mean mainly one: Greyhawk.

Here is the lineup of adventures:

Or they could have gone farther back into lore and called the product "Tales of the World Serpent Inn".

That would've been an even better fit! Yes!

They're just a bag of dicks, Mike. /bitterness

I thought I took umbrage in the late 80's when the Underdark and Oriental Adventures material originally destined for Oerth instead was set in Faerun. Back then, it was planned releases that changed places. It's worse now, because they're moving material that was already set in Greyhawk over. Blargh...

Well in this case it's still Greyhawk material, just presented from the POV of the Realms, which in a meta sense does Greyhawk fandom no use unless the material targets people to look into that setting much like Curse of Strahd celebrates Ravenloft. No, if they wanted to do a book on dungeons, Greyhawk can hold it's own in that department. Let me see them do a Best of the Realms compilation. Besides Undermountain, Dead in Thay was the best they could produce in the last 20+ years?