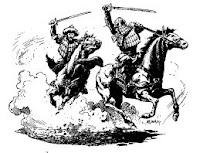 Per FF, Clubnek's are not so much killers as herbivores, and being green, are going to stand out except in meadows. Something defensive to stumble upon. Perhaps there should also be a more aggressive terror bird too that eats all those horses.