Okay folks, so some of my long term readers may have noticed my old World of Greyhawk Comic strip has been down and out for several years now. This is due to technical difficulties involving out of date HTML and stuff. Okay. Well I'm going to start reposting some of my old artwork and commentary at Greyhawkery cause why not? I have over 200 comics worth of good jokes and Greyhawk lore to share. I had started posting some of my weekly comics way back when I started the Greyhawkery, but I soon ran out of ideas so I dropped the comic to focus on the blog. I'm willing to bet more than a few of you have never seen these comics before, so enjoy!

Today's comics are a pair from April, 2008 involving the deity couple Norebo and Wee Jas. I wrote:

"It's been a while since I had fun with avatars. It's also been a long time since I used Joramy, the
volcanic lady or Xan Yae the lady of perfection. Who better to bring all these elements together than
Norebo? By the way today's scene takes place in Norbeo's temple, called the Church of the Big Gamble according to Dragon Magazine's Gods of the Suel pantheon series." 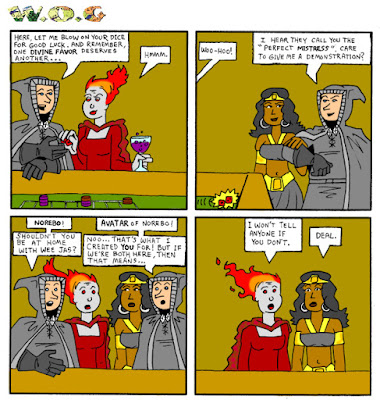 "Last week Norebo and uh, Norebo were fleeing the scene or else incur the wrath of Wee Jas back home. Let's see how it pans out." 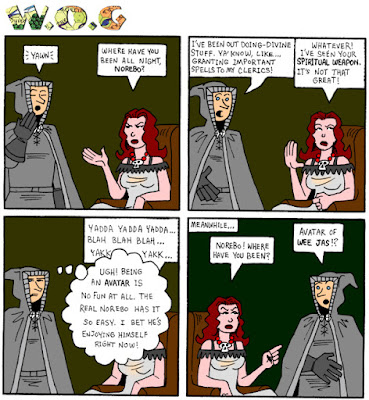 I love these comics, and never saw these particular ones. I wish you could collect them all and do a print version (maybe through Drive RPG?)!

I had forgotten this one! ROFLMAO

Been too long, Mort. Thanks for re-posting these.

Agreed, a print compilation would be great! :D

Woo thanks for the vote of confidence guys. I wish I knew something about printing stuff though. My colors were always done for online, hard to say what they'd look like on paper.

This made me ugly laugh far harder than I should have.

I just had an idea. The guy who does the online comic, Goblins, did a print version of the early strips. You might want to ask him if that transition caused any problems w/ coloration. The print version looks good to me! Also, if you do take this further, I would be willing to put up some capital to make this a reality (Paypal; Gofundme, or what have you). B/c I would love a print copy of all these strips. Just like I would have loved a print version of all the Wormy strips, which sadly is never going to happen...

Great stuff! Thanks for sharing. I second the print version idea.

I wish you could collect them all and do a print version (maybe through Drive RPG?)!