Well met, Greyhawkers! Today I'm sharing a map I did a month ago featuring Ulakand, the capital of Ull in the Baklunish West. Anyone who knows me, knows I am the #1 source of fan-made Ull material. I adopted little undeveloped, unwanted Ull back in 2004 by doing several articles for Canonfire. Since then no one, not even Living Greyhawk, Wizards or anyone has touched Ull, but me. Yes, I'm bragging, cause I've put a lot of work into this realm. And this map of the Ulakand Mesa is my latest addition.

The map is hand-drawn in ink on hex with hex with hex paper I acquired from Black Blade Publishing at Garycon 9 this year. The paper is neat stuff and I like the information in the margins including map location. That is a definite call-back to the coordinate system on the Darlene maps and nowhere else!

Some background on the mesa. A creation of my own, the capital of Ulakand is in the middle of nowhere which seemed boring to me, so I imagined a mesa poking up in the sea of grass, which legend says is the carcass of a deity's horse which died of exhaustion on the plains. In the NW corner of this mesa is Ulakand, nicknamed the "City of Horses". No place in the Flanaess reveres horses more than here. The town proper rests on top of the mesa which can look out on the open prairie for hundreds of leagues in all directions. The part of Ulakand on the ground is mostly tents and corrals belonging to various tribes of Ull nomads.

Further into the mesa are other points of interest for wary adventurers passing through including a catacomb to the south and a haunted wood to the NE. The map is keyed you will notice. This is for future reference because I plan to someday put out a gazetteer of Ulakand which will develop all the points on this map in greater detail. I will you keep you posted. Until then, enjoy Ulakand and make of it what you will! 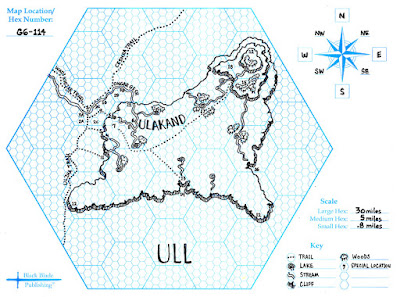 Next year at Garycon, why don't you DM a game set in Ull? My friends and I would sign up for that immediately.
JC

JC: Good idea, man! Would it include gnomes as PCs? Cause I'm totally gonna slay them if it does. ;)

"No place in the Flanaess reveres horses more than here (Ull)."
As a Perrenlander, I would like to nuance this. Perren is plural for peret, or peerd, or paard, depending on the regional dialect, which means "horse".
If you look at the Perrenland proverb Noch ors, noch peret, which means neither riding-horse, neither farm-horse, you can see that both "ors" and "peret" are used to indicate horses. So Perrenland means horse country.

Also, while Perrenland has cultivated breeding and training of horses for many different purposes (including warfare), Perrenlanders usually have a deep respect for the Wegwiur (more commonly known as the Wolf Nomads) and the way their horsemanship is deeply entwined in their culture.

As a matter of fact, an exchange between Ull and Perenland equine traditions might prove very interesting, and may further the mutual understanding of our cultures, and could benefit diplomatic and economic relations.

Ah much respect for your Perrenlandic response, and an impressive tie in to Wegwuir traditions. For some added nuance however, Ull or the tribe Uli are a splinter of the horse-riding Paynims, who likely roamed the vast plains since imperial days. The Uli were the first to take advantage of the last vestiges of Oerid tribes that still lingered in the land between Ulsprue and Crystalmist Mountains, and not migrated east before the Twin Cataclysms.

The occupation by these semi-nomadic horselords has been a way of life on the fringe of the Dry Steppes since the founding of the earliest great Oerid and Suel kingdoms of the Flanaess. It was the coming of the Brazen Horde from the far west, @600 years later, that threatened the Uli's dominance in that region. The Brazen Horde had been incited by Zeif for reasons unclear, but the result however was Ull successfully defended against the incursion and a simultaneous Oerid uprising. Losing, refugee Oeridians fled north through Tusmit and Ekbir along with other displaced horse-riding nomads. They were unwelcome in these parts and kept moving north and east.

These peoples eventually became known as the Tiger and Wolf Nomads (of the Relentless Horde) during the first years of Perrenland's independence.