Why Darlene's Greyhawk Map is Special

Welcome again fans of Greyhawk. A very good question was posed to me in the comments of my post last week:
"I've never understood people's reverence for the Darlene map. I'm not knocking it or anything, I just don't get all the fuss. Then again, I only joined the hobby in 2001... So maybe I'm spoiled by the higher production values of later stuff, or some other generational difference? I'd like to understand what the big deal is, because I feel like I'm missing out."

Why is there such reverence for the artist Darlene's original World of Greyhawk maps? That's an answer I feel is deeply personal for each fan of Greyhawk of course. You might get a 100 different responses if you polled, so here I'll try to lay out some good points and see how they compare to you, the reader's feelings.

I do think its an intrinsic reverence when you ask why Darlene's map are so good. Fantasy maps like all the maps of that era were hand drawn, certainly not done on computers, with few being world-wide maps done at such a scale (I immediately think of Harn or Wilderlands). Maps in modules were often black & white, or the classic non-photo blue. So a full color, two-part poster-sized, keyed, hex overlaid map with hand-scripted labels back in 1980 was quite ahead of its time in my opinion. That is the high production value back then. I used to hang these maps on my wall like you would any other poster. I then later had my first set of Greyhawk maps laminated so they could withstand the amount of use they saw in my campaigns. I have plenty of other really gorgeous RPG maps that are in mint condition. That's not necessarily a compliment.

The content and realism of Greyhawk's continent is too easy to debate because it is indeed flawed. Fantasy world-building has no time for knowing everything about proper physical geography. What's important is the map makes an emotional connection to people when they first explore it. What you first see is the map's color and shapes; the scintillating shades of blue in the Flanaess' demarcated ocean depths, the vast green tracts of the world's huge forests, the myriad river systems that wind around the hexagons like veins in the body, and the toned texture of the many mountain ranges that cause your eyes to travel from one end to the other.

The first time I became this enthralled seeing a map was Tolkien's Middle Earth and I certainly felt the same reverence seeing the first map of the Forgotten Realms. Back then all I knew about that game world was from Ed Greenwood's articles in Dragon. It was Dragon incidentally that teased the new world with a free map in its pages. I remember spending a long time pouring over it and more when the "gray" boxed set maps eventually came out. That's how I felt when I got my World of Greyhawk boxed set in 1983. It could be age and experience now, but I admire today's maps in a different way.

As the commenter suggested I do feel spoiled now. After a game map's general shape grabs me, I cannot help but compare it to Darlene's map (or the others of its era). Was it hand drawn? Was it mostly done on Photoshop? Does the cartographer have a unique style or is it generic? There is a matter of function as well. Some maps are meant to be used for game information either omitting detail for players or at times overloading them with detail. Maps can also have more of an aesthetic value. Darlene's maps as I mentioned earlier are definitely aesthetically pleasing, but at the same time they use game relevant elements like the hexagons, keyed margins and just enough geographic and national labels to convey basic information to players without giving away the location of secret places like the Tomb of Horrors or the Hidden Shrine of Tamoachan. 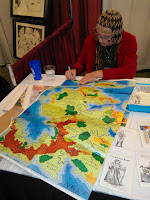 So yes, the Darlene Greyhawk map is special and is my favorite (and heck I got to meet her). Is it technically the best game map ever made? Not at all. That's because it's fundamentally simple to digest and expand upon. I would say however that it's the most influential. Both reasons are a huge incentive for fans to learn to make their own maps. Artists such as Anna Meyer, Rob Lazzaretti and Mike Schley are among my favorite cartographers and I love that new tools, new techniques and new RPGs push them to create wonderful and exciting maps. I'm sure each one of them has a story they could tell about Darlene's maps.
Posted by Mike Bridges at 10:43 PM

Yep! What else can I say? You nailed it for me.

I've moved on to the 4 maps Paizo put out for GH, simply for the greater detail and named locations, but I can't deny the thrill I remember for years of looking at the Darlene predecessors. You definitely nailed what is/was great about them.

I too have started to use those, though they are the same exact scale. Unlike the From the Ashes reprint which was just Darlene's map with added new cities, the Paizo ones at least were redrawn and look sharper.

Thank you for explaining, but I still don't truly get it. I guess it's just a "you had to be there" kind of thing.

Although I do appreciate the hand-drawn aspect of it. Makes it seem like a diegetic artifact, like this could be the very same map my character can pick up and study.

What a great photograph! ;)