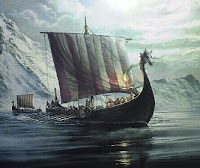 Happy New Years, denizens of Greyhawk! Today I'm going to shift into gear and entertain you all with one of my favorite D&D past times, namely grabbing random published books off my shelf and picking out an obscure bit of canon that no one has ever discussed. Let's see what we get starting with the most dense of all Greyhawk tomes:

"Their greatest kings and jarls have all been seafarers, beginning with Schoffmund the Strong, who defeated the Kraken of Grendep Bay. Since this day, all dead Schnai kings are interred in ships, which are ignited and set adrift on the sea."

Bonus: In the hardback Greyhawk Adventures is a wondrous item called the Black Sails of the Schnai. A great warrior who is burned on his funeral pyre can be summoned back to fight as an einheriar for the possessor of the last magical shred of his ship's sail.

"The stables now hold over 100 breeding mares, some two dozen stallions, and perhaps 200 fillies and colts in various levels of training. The purchase price for one of the young horses is double the asking price in the High Market of Greyhawk, but generally considered worth it.
For those who take their horses very seriously, the Blackfairs may consider parting with a breeding mare, for 2000-3000 gold, approximately. Some of the stallions can be had for as little as 10,000 gp, while others have fetched five times that amount. The stud of the herd, called simply Father Black, is not for sale, though it is rumored that the lord has been offered more than 100,000 gold for that horse."

Bonus: In case you haven't done the math, all the horses of Blackfair Manor are worth a total of 570,000 gold pieces. Minimum. Remember that tidbit when you have too much treasure to spend and want to show off to your comrades, or when your DM asks your group if you want to go looking for scraps of treasure in some nearby dungeon and instead turn to a life of horse thievery. 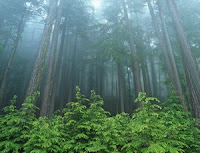 The Scarlet Brotherhood (on the Lone Deklo)

"The solitary tree is surrounded by an open field 100 yards across. The Lone Deklo is a monstrous example of its kind, 30 feet in diameter and nearly 300 feet tall...The Lone Deklo is sentient and is effectively a sage specialized in flora, fauna and astronomical and meteorological phenomena. It can converse in a low whisper similar to the sound of wind though branches..."

Bonus: For comparison, in A Guide to the World of Greyhawk, the section on Trees (yes, Gygax created his own trees) states that a deklo tree is a massive hardwood often 15 feet in diameter and over 100 feet tall with round leaves than can sometimes span a foot in diameter.
For further comparison, the world's tallest tree on Earth is Hyperion, a sequoia at 379 feet. Sequoias have an average width of 24 feet and can live roughly 3000 years. If the Lone Deklo is half that age, it was around before the Twin Cataclysms, the Migrations and might remember the time of the elves and the ancient Flannae kingdoms.

"Despite its modest size and undistinguished history, Jurnre is among the most peaceful and prosperous cities of the Flanaess. It is also one of the oldest, excepting certain settlements in Ekbir, Zeif and Tusmit that antedate the Invoked Devastation. From the time of its foundation nearly nine hundred years ago until the present day, Jurnre has been an island of stability in the turbulent stream of history...
A brief siege of the city by refugee goblins and orcs in 506 CY, at the height of the Hateful Wars, and some unsuccessful attacks by the Sea Princes sailing up the Kewl...are distant history to the human citizens of Jurnre, and even nonhumans have begun to forget. Not even the oldest gnome can remember the sight of enemies within the gates."

Bonus: Not only is Jurnre peaceful, it is quite idyllic. The County of Ulek is ruled by Archdruid Lewenn (13th level) who is quite possibly the only druid involved in Flanaess politics. His constituents are of course halflings, gnomes, sylvan elves and also the nearby Silverwood is home to treants and unicorns.

That's all for now, hope you enjoyed!

I'll have to give Black Sails of the Schnai a try.

Good stuff here, I found something I can use! Thanks!

If Archdruid Lewenn loses his title to an aspirant 12th-level druid, does he retain his temporal position?

Thanks fellas. The black sails is a very original idea. The author, James Ward is crafty.

Dave: That's great! Any time I can influence GHR makes me happy.

MP: You know I bet thats exactly what happens. I want to know why/how Lewenn gets the job in the first place.

Dang it, the contact me link is disabled...
I found this in a diplomacy zine called europa. It has great significance for greyhawk:

Before the rules for D&D were published 'Old Greyhawk Castle' was 13 levels deep. The first level was a simple maze of rooms and corridors, for none of the participants had ever played such a game bwfore. The second level had two unusual items, a Nixie Pool and a fountain of snakes. The third featured a torture chamber and many small cells and prison rooms. The fourth was a level of crypts and undead. The fifth was centred around a strange font of black fire and gargoyles. The sixth was a repeating maze with dozens of wild hogs (3HD) in inconvenient spots, naturally backed up by appropriate numbers of Wereboars. The seventh was centred around a circular labyrinth and a street of masses of ogres. The eighth through tenth levels were caves and caverns featuring Trolls, giant insects, and a transporter nexus with an evil wizard (with a number of associates) guarding it. The eleventh level was the home of the most powerful wizard in the castle. He had balrogs as servants. The remainder of the level was populated by martian white apes, except the sub-passage system underneath the corridors which was full of poisonous critters with no treasure. Level twelve was filled with dragons. The bottom level, number thirteen, contained an inescapable slide which took the players 'clear through to china', from whencethey had to return via 'outdoor adventure'. It was quite possible to journey downward to the bottom by an insideous series of slanting passages which began on the second level, but the likelihood of following such a route unknowinglh didng become too great until the seventh or eighth level. Of the dozen or so who played on a fairly regular basis, four made the lowest level and took the trip: Rob Kuntz, now a co-referee in the campaign went alone; and three of his friends managed to trace part of his route and blunder along the rest, so they followed him quickly to the land of china. - side levels included a barracks with orcs, hobgoblins, and gnolls continually waring with each other, a museum, a huge arena, an underground lake, a giants home, and a garden of fungi.

Man, I love when you do things like this.

How about a feature on the trees of greyhawk?