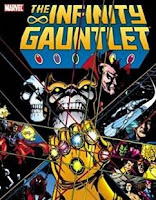 Hey Greyhawkers, it's your gleefully lazy friend here. Today I'm musing on the hottest movie in the world (right now) Avengers: Infinity War. If you haven't seen the last ten years worth of Marvel movies then what is wrong with you? This particular movie is based on the Infinity Gauntlet era of comics from the 90's; a series that I am proud to say I own and followed to a point. The main thrust of Thanos lore was in Silver Surfer comics sad to say because the Surfer cannot appear in the movie versions. At any rate, the topic here is how a "macguffin" (or macguffins) like the Gauntlet or the Infinity Stones can be a compelling save the Oerth type story arc for your Greyhawk campaign. No spoilers here!

D&D is full of numinous objects to collect or destroy, we call them artifacts and relics. Everyone has heard of these type objects (you can see a list of them in my primers on the front page) and for the most part they are objects like swords, orbs or even a hand. While dangerous in their own right, few are world-shattering. Now there is such a thing (2E is the last I heard of it) as resonating effects. If two or more artifacts are brought together they give more power than the individual parts. One infinity stone is powerful in the hands of a character, but two sets you on a path toward being an epic figure, perhaps god-like eventually.

There is a few good examples of this Infinity Stone-like resonating powers in Greyhawk such as the Five Blades of Corusk or the Regalia of Might (evil, good and neutral). The Rod of Seven Parts is the best one however, since it's a singular object once assembled (much like the Gauntlet). Collecting all seven pieces of the rod is a long term quest which if it fell into the hands of a big bad like say, Iuz or Iggwilv, would make them even more ridiculously powerful than before and require an assemblage of heroes to help take the villain down. Defeating a near deity/demigod isn't easy, but it's not unheard of in D&D.

For example, the old 3.5E Dungeon adventure path: Age of Worms was a high-level quest to stop a nigh invincible demigod from emerging on Oerth. This series also included the Ro7P to a small degree. The 2E module, Vecna Lives! was also a quest to defeat an ascendant arch-lich from completing his master plan to become a greater god. Very Thanos-y. The more recent Rise of Tiamat story-arc in 5E also involves a plot to prevent world catastrophe with the mother of all dragon's return.

You say you're tired of the same old Iuz and Vecna? What other Greyhawk villains are crafty and devious enough to spark a macguffin quest on this scale? I got a few. Eli Tomorast is definitely fills that niche as a power seeking madman with resources and a stable base of operations. Rary the Traitor is another no-brainer. He is a very high level wizard with many enemies and also a remote base to work out from in the Bright Desert. He already seeks the Scorpion Crown, but what if that is just his "gauntlet" and there is some stones it requires to really unlock it's power? Too many wizards messing around in Greyhawk? Okay, might I suggest then Warduke. Warduke is originally from generic D&D action figure fame, but came to Greyhawk lore in the Paizo era, featured in Dungeon Magazine #105. He is an ominously evil, high-level fighter who is also a Hierarch of the mysterious Horned Society. Few warriors in Greyhawk except Warduke can command the gravitas of Thanos and basically slash and burn his way to ultimate power.

I'm sure there are many other candidates, those are the first few that popped in my head. In summary, if you are floating the prospect of running a high-level, epic campaign then it's perhaps it's time to try saving the world by gathering the "Infinity Gauntlet" or stopping evil from doing so first.

I never tire of the "old standards," but then my imagination never runs out of ideas . . . yet. As for the poll?

"I serve no one," mused the Mystic Scholar, looking thoughtfully into the distance. "But, if I had to ally with someone, it would be a Wizard with my own outlook." (hint - NG)

Back in the 80's, I had the Infinity Stones spread around for epic-level characters. As a big Moorcock/Eternal Champion fan, I made their D&D origins based on Kwll (in the 1st Corum trilogy) having created them from the remains of 6 of the Chaos Lords from Elric's world. Good stuff.

The Gauntlet was assembled but once, w/ Thanos being the architect. Many heroes and deities died trying to stop his schemes (back in mythic prehistory I guess). Planescape had that celestial (CG?) layer that was basically a devastated desert w/ hints of a mythic race...that's where Thanos met his end. The Stones themselves survived but could never again be reunited into a Gauntlet...

A nice linking concept, Mike---I was wondering what you were doing putting Marvel into my peanut-butter, so to speak ;)

New artifacts and relics, as well as fixed places of power/artifacts---Throne of the Gods or Heward's Mystical Organ [imagine needing to relocate one of those!), new demiplanes/Fading Lands and sites of power (what's the True Neutral equivalent to the Cauldron of Night, or where a new source for Oerthblood has begun to "erupt" or otherwise sprung forth), etc.---are all things we should be thinking about as Greyhawk DMs in general, too. They can become central aspects of adventures or entire campaigns, and are a good way to engage PCs with sages, to travel to to the corners of Oerik, and to reach into the near and far planes, too.

grodog: Artifacts are one of my favorite things about D&D/Greyhawk. I can never have enough.